The cabinet shuffle: meaningful but not momentous

The key move is Peter Kent taking over as environment minister 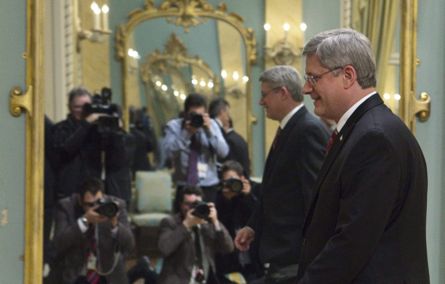 It’s a mistake to read sweeping strategy into cabinet tinkering. Today’s mini-shuffle is interesting only if you take it on its own, modest terms.

The key move is Peter Kent taking over as environment minister. That job, in Stephen Harper’s government, places two demands on the minister: 1) bat back Opposition questions about the government’s elusive climate change policy; 2) advance that policy, whatever it may be, in bilateral talks with the U.S. and ongoing international negotiations under the complex interim deal hammered out last month in Cancun, Mexico.

Kent seems nicely qualified on both fronts. He has shown himself to be splenetic figure in the House, readily angered but not easily rattled. In his former job as minister of state for the Americas, he gained experience in multilateral talks in the Organization of American States and other forums. Not a bad apprenticeship for an environment minister’s job that’s become defined mainly in terms of foreign relationships, rather than domestic policy innovation.

The next most noteworthy promotion, given the primacy of economic issues to this government, is Ted Menzies being named minister of state for finance, a notch up from his old job as Finance Minister Jim Flaherty’s parliamentary secretary. His congenial political persona makes Menzies conspicuous in a cabinet dominated by acerbic guys (see above). This is no small asset. Arguably the Harper government’s signature achievement in the past two years has been branding and selling “Canada’s Economic Action Plan,” and keeping up that communications effort through the coming budget season makes a bump up the pay scale for a likable salesman only sensible.

On naming Julian Fantino merely minister of state for seniors, Harper looks prudent in keeping his controversial rookie MP—the former Ontario Provincial Police commissioner who late last year narrowly won a by-election in Vaughan, just north of Toronto—away from law-and-order files. As for Diane Ablonczy filling Kent’s former slot as minister of state for foreign affairs for the Americas, with consular affairs tacked on as an added responsibility, this looks like a modest reward for long, competent service.

I wasn’t the only one who noticed that in his news conference on the shuffle Harper made glowing mention of Fantino’s “great” riding, and pointedly praised Kent for his constituency work for nearby Thornhill—prime-ministerial nods to prized Toronto-area seats. But he didn’t, as far as I heard, make similar mention of the Alberta ridings of Menzies and Ablonczy. That’s the difference, I suppose, between being in the bag for a political party and in its crosshairs.