Paul Wells: The prime minister has put away his sunny ways in favour of darker things—and a new cabinet that is built for survival 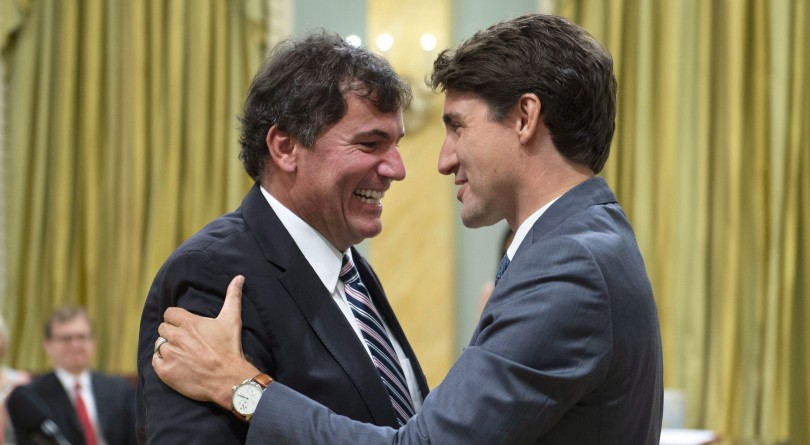 Prime Minister Justin Trudeau shakes hands with Dominic LeBlanc, Minister of Intergovernmental and Northern Affairs and Internal Trade, during a swearing in ceremony at Rideau Hall in Ottawa on Wednesday, July 18, 2018. (THE CANADIAN PRESS/Justin Tang)

“Sunny ways, my friends, sunny ways,” a beaming Justin Trudeau said on Oct. 19, 2015, as he accepted a mandate from the nation’s voters to form a majority Liberal government. Two weeks later, unveiling his first cabinet, he kept two jobs for himself: as minister for youth and minister of intergovernmental affairs. Because the world was fresh, the birds were chirping, daisies and daffodils were shooting up through cracks in the sidewalk, and the nation’s children and its provincial premiers were functionally interchangeable.

Bliss it was in that dawn to be alive: Liberals governed every province from Ontario to the Atlantic, except in Newfoundland and Labrador, and even that oversight would be fixed by Christmas. Liberals governed British Columbia, sort of. Alberta had a new NDP government and Manitoba had an old one, and neither was in a mood to pick fights with Ottawa. Brad Wall in Saskatchewan, a keen populist, knew a popular head of government when he saw one. He was in no mood to pick fights with Trudeau.

So much has changed, culminating—for now—with the burial of Ontario provincial Liberalism at the hands of Doug Ford. Alberta and Quebec could next fall to Jason Kenney and François Legault. Certainly that’s the way to bet it. Even normally sunshiny New Brunswick, Newfoundland and PEI are refusing to file carbon reduction plans in line with what Catherine McKenna expects.

So the cabinet Trudeau shuffled on Wednesday isn’t a pre-election cabinet, in the sense of one that’s sweet and shiny to attract distracted voters, so much as it’s a survive-until-the-election cabinet. If this cabinet were a movie, it’d be Walter Hill’s 1979 classic The Warriors. A bunch of street fighters, just trying to make it from the Bronx to Brooklyn in one piece. Doug Ford calling to them from an abandoned car, clinking empty bottles together. Or to use another, perhaps less obscure, movie analogy, it’s farewell to Hope and Hard Work, hello to Horse’s Head/ In Your Bed.

The stars of this partially-refurbished cabinet are two bad cops, in one case quite literally: Bill Blair and Dominic LeBlanc. Blair’s job on the border-crossing file isn’t only to get up Doug Ford’s nose, though that’s a handy bonus. It’s to do more or less what he did as the Liberals’ back-bench pilot of cannabis legalization: to steward a controversial file as humourlessly as humanly possible, to convey with every flinty word and steely grimace that the government is not even remotely interested in messing around.

It’s interesting that Ahmed Hussen, a personable and diligent minister who was also obviously appointed so he could incarnate Liberal branding of openness and diversity, keeps every part of the immigration file except those elements that scare some voters: the people walking across the border. Those parts have been assigned to Sgt. Rock over here.

LeBlanc, an irrepressible rogue whose dad was Pierre Trudeau’s fisheries minister and who has known Justin Trudeau all his life, is not by nature a political bone-crusher, although that’s certainly within his vocabulary. He doesn’t even like when people like me emphasize that part of his personality. He will prefer to get along. But he has the job Trudeau had because Trudeau noticed that, even though his intergovernmental minister was Justin Trudeau, the intergovernmental mood out there was getting noticeably chippy. So Trudeau stripped Trudeau of that portfolio and handed it to someone who could concentrate on it. It’s traditional to view a smaller ministerial portfolio as evidence of a demotion. Trudeau becomes the first prime minister I’ve ever covered who has demoted himself.

Especially out east, on his home turf, on the climate file, LeBlanc will try to sweet-talk, finesse, flatter and deal. His tone will be closer to “Come on, guys!” than to “Do you feel lucky, punk?” He’ll be helped by one of his less-noticed attributes: Unlike far too many Trudeau Liberals who fell off a truck in 2015 and discovered they were members of a majority government, he does not view his own politics as proof of his virtue, or his adversaries’ as proof of their moral collapse. Many of his interlocutors will be surprised to discover that LeBlanc shows up with less of a chip on his shoulder than the next dozen or so Trudeau Liberals you might name.

But neither will LeBlanc be surprised to discover he sometimes has a politician in his face, or incapable of replying in kind. LeBlanc’s early political jobs were in the 1990s as a carrier-out of assorted errands for Jean Chrétien, whose capacity for amorality seemed less to shock the young New Brunswicker than to delight him. He has been underused in this government, distracted by a serious health challenge, but suddenly there’s a fight, sweet-talking won’t close any deal worth closing, and LeBlanc’s very particular set of skills comes in handy.

None of this is a guarantee of success. New majority governments in Canada usually get re-elected, but it’s never guaranteed and on bad days, with Trudeau it seems touch-and-go. You and I ignored the session at the Liberals’ Halifax convention in April where Gerald Butts, the prime minister’s principal secretary, interviewed David Axelrod, the former advisor to Barack Obama, for advice on winning elections. But Butts was right there, and Trudeau was in the audience, and it’s in every Liberal’s deepest instincts to take advice from a visiting U.S. Democrat seriously. Axelrod’s main message was that you win your first election on “hope” and your second on “choice:” that unbridled optimism works less once you’ve established a record, and disappointed some of your voters, and given your opponents time to draw a better bead on you. So a second election, Axelrod said, is always a darker thing.

“There are dark forces in our politics now, and sometimes they arrive in stealthy ways,” Axelrod said on that Halifax stage. “You have to be prepared to push back.”

The 2019 election is already underway, has been for months. Justin Trudeau, his father’s son and a self-proclaimed admirer of Wilfrid Laurier’s “sunny ways,” just showed he has some Jean Chrétien in him too. He’ll need it.