Marie-Danielle Smith: There were no handshakes to parse or walks down the hall, just the familiar hiccups of a video chat—and a few reminders of a return to friendlier times 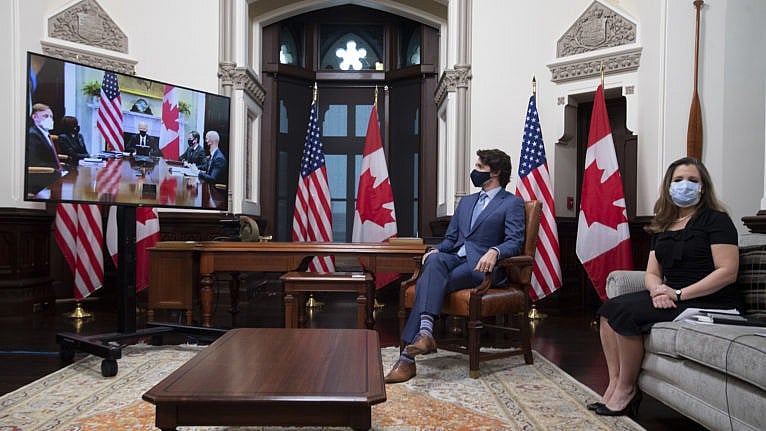 We used to discuss the energy of the handshake. Whose grasp looked stronger? Whose smile was bigger? How many seconds did it last? We used to count the seconds.

The last time a Canadian prime minister and a United States president shook hands was in December 2019, at a NATO summit in the United Kingdom. It had been a difficult few years for Canada-U.S. relations, despite the signing of a re-negotiated NAFTA. Long gone were those early days in his tenure when Justin Trudeau could look south to an ideologically-compatible White House.

Serious policy analysis aside, you could always glean something from the handshake. Between Barack Obama and Stephen Harper, it looked polite, but cool. Between Obama and Trudeau, it appeared to be a warm embrace. Between Trudeau and Donald Trump, well, you might remember a photo that said it all, of Trudeau looking down at the president’s proffered hand with a bemused, skeptical expression.

After that last bilateral grip-and-grin, just weeks before the coronavirus pandemic would begin to spread worldwide, Justin Trudeau was spotted apparently gossiping about Donald Trump with U.K. prime minister Boris Johnson and their Dutch counterpart Mark Rutte. The trio’s conspiratorial cocktail-hour scrum looks alien in the age of COVID-19. (And knowing what we know now about the dangers of aerosolized droplets.)

Back then, those little human moments—the hot mic catching a bit of gossip, the body language during a walk down the hall, the tenor of a post-meeting handshake?—those were some of the few hints at how leaders really felt about each other, and how talks might be going behind the scenes in Canada’s most important relationship.

We can make much of the fact that President Joe Biden chose to conduct his first formal bilateral meeting with Trudeau. We can parse the outline of a “Roadmap” the White House published Tuesday, ahead of that rendez-vous. We can analyze the joint statement and take from it an early sense of what to expect from a new administration.

But as much as the two governments appear aligned on issues such as climate change and diversity, and as much as everyone involved in the meeting struck an overtly friendly tone, there was no handshake to take note of.

What we got instead was a weird encapsulation of international relations in the pandemic age.

Everybody wore a mask. Finance Minister Chrystia Freeland and foreign minister Marc Garneau sat at opposite ends of a three-person couch, at a distance from Trudeau, who sat in a brown armchair beside them, hands clasped in his lap.

The desk behind Trudeau was mostly barren, as if it hadn’t been used in a while, in lieu of a home office. Several Canadian and American flags were set up along the edge of the room.

With a small press corps looking on, three Canadian officials watched a big flatscreen TV that showed several officials in a faraway boardroom, Biden at the head of the table, veep Kamala Harris to his right. They had stacks and stacks of paper in front of them.

Trudeau projected his voice towards that screen in that slightly-overwrought, outside-voice tone we’ve all used when we’re unsure whether the other Zoom participants can hear us. On top of that, you could tell he was over-articulating just a bit, like we all do, now, through our masks.

When you can’t see anybody’s mouth you try to glean their moods in other ways. “Warmth exudes from his voice,” a Canadian Press pool reporter wrote, describing Trudeau. “His eyes are wide suggesting big smiles beneath the mask. He notes it is Garneau’s birthday.”

It’s like when you’re at the beginning of a video chat with colleagues and you muddle along with small talk until someone raises a topic of substance. You get the “Happy Birthday!” or “Happy Anniversary!” out of the way right off the top. You mention what new acquaintances have in common. Harris invoked her time in Montreal. Biden said it’ll be nice to see everyone in person.

Before the media were ushered out, Trudeau betrayed relief that he was opposite a new counterpart, saying American environmental leadership has been sorely missed, that it’ll be nice not to scrub references to climate change from joint communiques.

Then we were left to imagine what could possibly be happening behind closed doors. With a lengthy list of Canadian cabinet members joining an expanded meeting scheduled an hour into the summit, did they all switch to “gallery view”? Were there any technical difficulties? Did anyone forget to mute themselves?

After two hours—the meeting ran late, another positive sign we can analyze—Trudeau stood in the Ottawa room next to a screen that broadcasted Biden’s remarks from Washington, D.C., looking like a late-night host about to comment on picture-in-picture footage.

When the president wrapped up, he turned to watch Trudeau on his own screen, as if still in video-chat mode. This looked comedic in Ottawa—on the TV next to Trudeau, Biden was pictured looking the opposite direction.

There was no body-language indication of how the meeting had gone, beyond the effusive list of matters on which the two agreed, beyond the couple of pronunciation mishaps that indicated Biden had had a long day, beyond Trudeau’s decision to refer to the president as “Joe,” “mon ami.”

There was no handshake. It feels possible that there will never be a handshake again. And only now, when each leader was alone to deliver his remarks in front of a camera, did their masks come off.