The challenge ahead for Seamus O'Regan

The Liberal MP is in treatment while he tries to quit drinking. He'll need all the support he can get once he's out, including from at least one colleague who's been there. 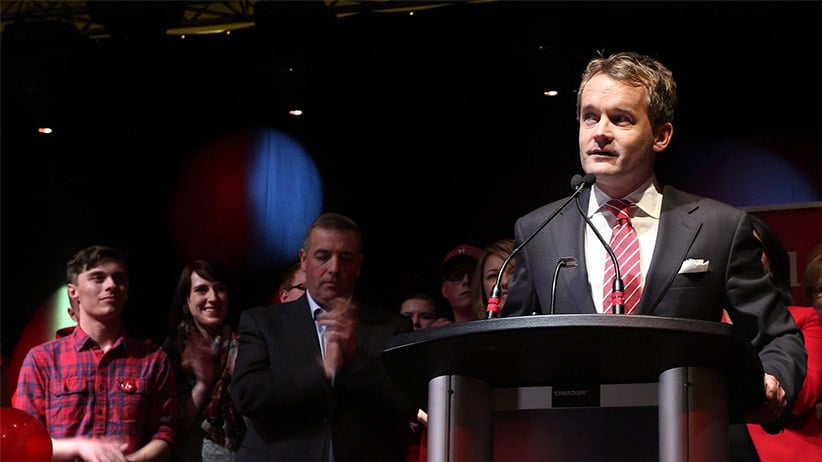 Seamus O’Regan, flanked by supporters, makes his acceptance speech at the Delta Hotel in downton St. John’s following his win in the district of St. John’s South on October 19, 2015. (Paul Daly/CP)

With four concise tweets, one of Canada’s best-known MPs made public on Sunday what could only have been a significant personal struggle. “I’ve decided after consultation with family that I can be most effective as a member of Parliament by adopting an alcohol-free lifestyle,” Seamus O’Regan wrote on Twitter. To that end, said the former CanadaAM host, he was in treatment.

It’s no surprise the declaration made an immediate impact, coming from a man whose smiling face once greeted Canadians from their televisions every morning. O’Regan was soon trending on Twitter, in no small part because of the tweets of support from strangers and colleagues alike for going public with his battle.

A handful of Twitter users raised questions about whether O’Regan should have been upfront with voters before taking on a public role from which he now has to step away for a few weeks to complete his treatment. The Liberal party’s “green light” package for potential candidates runs to more than 30 pages, but the questionnaire doesn’t ask specifically about alcohol and drug use. It’s mainly interested in whether a potential candidate has had legal or professional problems. The last question, however, asks whether there is any “material fact” that could hinder the performance of a candidate’s public duties. That leaves it up to the Liberal hopeful to disclose any substance abuse problems, a disclosure some do make.

Such a declaration isn’t necessarily a deal-breaker. Addiction, after all, is a medical condition that needs accommodation, says Jack Siegel, an employment lawyer who chaired the Liberals’ green-light committee ahead of the 2015 campaign. Even an ongoing drinking problem shouldn’t preclude someone from public service. “I’ve worked with people with severe alcohol problems and they do great work, politically and professionally,” Siegel said. “Lots of people manage with it.”

Some of O’Regan’s Parliament Hill colleagues have experience with that. If the MP for St. John’s–Mount Pearl needs support and advice upon his return to Parliament at the end of January, he needn’t look further than the government benches. Immigration Minister John McCallum went into treatment following 2002 media reports that he was denied boarding on an Air Canada flight to Ottawa. McCallum told the Toronto Star at the time that he’d had a few glasses of wine over dinner and was surprised he was asked to wait an hour before getting on the next flight.

“Though it’s certainly not easy at times, [O’Regan] will be very happy if he can defeat alcohol,” McCallum said in an interview with Maclean’s. “It will be better for him, for his loved ones and, less important, for his colleagues in the House of Commons. But it’s a wonderful thing that he’s set out to do and I wish him all the best.”

McCallum was reluctant to talk about more than the broad strokes of his decision to quit drinking, although he was quick to return the call from Maclean’s to offer support to O’Regan. It’s perhaps a sign of the struggle many people face over how much to make public (McCallum says some social media users still like to remind him of that 2002 incident).

“It’s hard to describe, but I just think in every aspect of one’s life this is a millstone that weighs upon you and devalues a lot of what you do in both your personal life and your professional life. It becomes a weight and a negative that keeps growing,” he said. Despite that, McCallum gradually started drinking again, quitting for the second time—”hopefully permanently”—about three years ago.

There aren’t many MPs who have gone public about their sobriety. Those that have seem to have had it forced upon them. In a situation oddly similar to McCallum’s, New Democrat MP Romeo Saganash also sought treatment after it was revealed in 2012 that he had been kept off an Air Canada flight between Montreal and Val-d’Or. Saganash has spoken openly about his treatment for alcoholism since then and was re-elected last fall.

O’Regan will likely need every bit of support he’s been offered if he’s to maintain his sobriety. The spotlight that follows those in public life makes it easier to pick out the normal setbacks most people experience when they’re trying to quit drinking, potentially making it even harder. “It is such a personal challenge and struggle that to have to do it in front of tens of thousands of people makes it a lot more difficult,” said Marion Wright, interim executive director at Ottawa’s Rideauwood Addiction and Family Services.

Returning to work will present another set of problems, with Parliament’s work and social lives built around drinking: cocktail receptions abound between 5 to 7 p.m. on most nights and commiserating over a beer is a cross-party bonding experience. Non-politicians and staffers “could more easily change our social network than when the social network is the business network, is the culture that you’re part of. It’s very difficult to be abstinent, to moderate use, to be in recovery, when you’re surrounded by individuals who are not,” Wright said.

Now that O’Regan has gone public and entered treatment, he’s taken the first step to recovering. Wright says the more public support O’Regan has, the smoother that will go. “It’s completely possible, but he has a lot to do. And it’s not easy.”