The children, our future 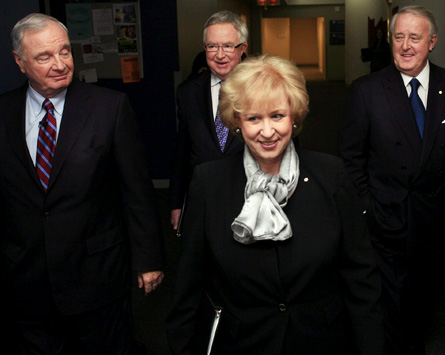 Welcome to our Canada’s Next Great Prime Minister liveblog. Just like being there. Even if we’re not. And the show was actually taped last month.

7:51pm. Catching the last ten minutes of Jeopardy. Accepting that there’s something to be said for the CBC not spending its precious public dollars on American programming, surely there’s an exception to be made for Jeopardy, a show that screens for knowledge and lucratively rewards nothing more than intelligence and a quick thumb reflex. All things considered, it’s altogether remarkable that it’s still on television. There’s nothing remotely like it on network television. It and Fareed Zakaria’s GPS are the only things still separating us from the apes.

7:56pm. In the CNGPM promo they keep showing, Paul Martin observes that Canadians are looking for leadership but just aren’t seeing it. Not that that he’s had anything to do with that.

7:58pm. What is pop? No, gospel. Elvis won all his Grammys in the gospel category. Interesting.

8:00pm. Show opens with Alex Trebek getting his makeup done and mocking his own ego. Fine start.

8:01pm. Alex introduces our moderators—Brian Mulroney, Kim Campbell, Paul Martin and Joe Clark. Three prime ministers most noted for their failing and another who is about to be the subject of an inquiry into his relationship with a German arms dealer.

8:05pm. The candidates are introduced. One is the mascot for the local junior hockey team. Seems about right.

8:09pm. First challenge is to give a 30-second speech. Fourth candidate declares himself a “passionate, principled nerd,” waves his arms erratically and asks voters to “take it or leave it.” This young man learned nothing from the Stephane Dion era.

8:14pm. For the record, that young man was David Suk. And in the audience polling, he finished fourth with 18% of the vote. The early leader is Robert Marsh with 34%.

8:26pm. Robichaud takes that challenge with 39% of the vote, Marsh second, then Gabriel Brian Lopez. Suk goes down to 14%.

8:27pm. Now, “The Crisis.” Contestants are presented with dire situations and given 30 seconds to explain what they’d do. Suk gets the ticking time bomb scenario and is asked whether he would authorize torture. Suk says he wouldn’t, because it doesn’t work. Mulroney appears to sort of give his blessing.

8:30pm. Gabriel is asked what he’d do if his son illegally hacked into the leader of the opposition’s email account. Gabriel says he wouldn’t turn his son in. Mulroney says, “wrong answer.” Gabriel asks him if he’d turn in Ben Mulroney. Mulroney says no, but seems to say he might offer up one of his other sons.

8:32pm. Marsh gets a terrorist scenario—whether to negotiate or not. Marsh says no. Martin says the answer is right, but the premise is wrong and he would negotiate.

8:33pm. Robichaud is asked whether she’d spare a pedophile from the death penalty in another country. She says she’d have him repatriated. Martin says she’s correct. Mulroney and Clark too. So basically we’re all for ignoring political expediency in the face of national ideals. It all seems so easy.

8:40pm. The audience is apparently a demographically representative sample of Canada, by the way. Just in case you were assuming it was a bunch of downtown Toronto socialists.

8:41pm. Kim Campbell suggests that it’s best not to be “quirky.” Joe Clark acknowledges that Mulroney was better at drawing supporters than he was. Martin waxes philosophical on democracy. All of them are much more likable now that there’s no threat of them running for office again.

8:44pm. Now, “The Final Appeal.” Gabriel talks about ethnicity and unity. Suk does his best Stephane Dion impression. Marsh says he “knows what everyone is feeling” and wants to restore faith in politics. Robichaud proclaims her love for this country. And the final vote… right after this.

8:50pm. Suk and Lopez finish in the bottom two. And because they clearly didn’t plan on the rest of the show going so quickly, they cut to another commercial before announcing the winner. One of those commercials turns out to be the one for Cheetah energy drink with Ben Johnson.

8:54pm. Here’s a theory: It’s impossible for anyone under 30 to get involved in politics on this level and not seem at least somewhat ridiculous. Their idea of who they’re supposed to be, how they’re supposed to act, inevitably exceeds their actual grasp, knowledge or life experience. A bit like a little kid playing dress-up. Arguably no one should be allowed run for office until they’re 35.

And it’s all over. Bit like watching an election on speed. But would anyone—politicians, voters, journalists—object to all elections being conducted like this—taped and edited into a one-hour special hosted by a game show host? Probably not.