The clock is now ticking on Trudeau's minority government

Politics Insider for Dec. 6: Trudeau's vague throne speech, how Canada can fight back against China's bullying, and Trump muses about slapping Canada with more tariffs 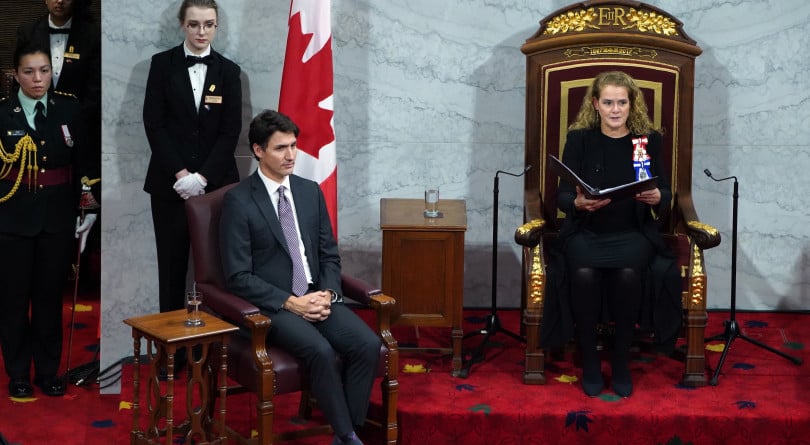 Did someone forward you this newsletter? Sign up here to get it delivered weekday mornings.

We start today’s Politics Insider in the most obvious place — the Senate’s temporary digs in the old Government Conference Centre near Parliament Hill, where Justin Trudeau, via the voice of the GG, laid out his minority government’s priorities for the next few weeks/months/years in his Speech from the Throne, which will pass thanks to the support of the Bloc, even if the NDP and Conservatives have said they’d vote against it.

More will be done: If the Liberals’ goal was to be deliberately vague, well, the Trudeau team’s speechwriters absolutely nailed it, writes Paul Wells:

I’m not vexed, yet, by the lack of detail or the, I suspect, accidental echo of the departed but still influential Gerald Butts. A throne speech, especially one so resolutely pithy its modest length was the subject of advance billing, is not a blueprint. It simply proclaims, This is the sort of government we plan to be. This one plans to hit challenging targets in 2030 and to line up harder targets every five years through 2050. But what about the oil sands? Fear not: the government “will also work just as hard to get Canadian resources to new markets” and offer “unwavering support” to anyone whose resource-sector job has left them in hard times.

You might think there are tradeoffs and contradictions in all this. The government is acknowledging, for the moment, no such thing. And the perils of a minority government? The Greens and NDP are against that resources-to-markets stuff, if it means expanding Trans Mountain, and the Conservatives don’t like the carbon tax. Is Trudeau simply defying them to bring him down if they don’t like his work?

Basically, sure he is. Read more ››

Justin Trudeau pours on the restraint: Justin Trudeau’s minority government’s Speech from the Throne was far from the shiny plan he unveiled 2015, writes Shannon Proudfoot:

The more grounded portions of that speech read like a legislative to-do list lifted straight from an election platform—which is exactly what it was—and that grocery list was both ambitious and extremely specific.

Thursday’s post-election Throne Speech, on the other hand, was distinctly more restrained, both in what it laid claim to accomplishing in the coming months and years, and in the detail it publicly pinned to those plans.

The most obvious reason for this vaguer road map, of course, is that Trudeau’s party now presides over a fragile minority rather than the robust majority they had in 2015. Every decision about what they can accomplish, how they craft legislation and conduct committee work will now be subject to constant negotiation with a rotating cast of opposition MPs, and not simple majority fiat. Read more ››

A disturbance in the Throne Speech continuum: Before Governor General Julie Payette read Trudeau’s throne speech she offered a preamble of her own: “We know that we are inextricably bound to the same space-time continuum and on board the same planetary spaceship.” What, beyond being a feature of Star Trek episodes, is a space-time continuum? To find out, John Geddes spoke with a professor of philosophy of physics, the last person he expected to speak about a throne speech. Former astronaut Payette’s use of the term “seems a little superfluous,” the good professor admitted, after explaining it’s meaning, “but it does sort of emphasize the connectedness, that we’re all in the same space.” Read more ››

Scott Gilmore offers a memo to our new parliamentarians: Don’t be a**holes:

Parliamentary heckling has a long and sordid history in Ottawa. It waxes and wanes. Some years it seems better than others. Other years it seems especially bitter and partisan. But it is sadly always there, always a stain on the House. Read more ››

The right snuff: Canada is being bullied by China, writes University of Ottawa law professor Amir Attaran. How can Canada shut it down? By shutting down Canada’s skies to the multitude of Chinese cargo planes that pass over Canadian airspace on their way to the U.S.: “While this sounds—and is—extremely aggressive, it is also perfectly legal.” Read more ››

Regime sends warning to Canada, part 2: On the same day Kellyanne Conway dismissed Trudeau’s hot mic gaff in London as a sign he is “jealous” of Donald Trump, her boss returned from his trip to the UK once again ready to hit Canada and other countries with tariffs for not “putting up their money” on defence spending.

New world disorder: There are riots as far as the eye can see, writes Terry Glavin. And even in the world’s most stable democracies, the absence of street protestors masked a loss of public confidence in governing institutions. Governments everywhere are facing a crisis of legitimacy.

America is deeply divided—and some say another civil war is a possibility: Donald Trump’s final innings would be less daunting if the rule of law hadn’t been called out at third base—to the delight of the president’s cheering fans, writes Allen Abel.

Say the word: Help us better understand what you’d like from the Maclean’s Politics Insider newsletter. This short survey will only take a few minutes to complete. We really appreciate the feedback.