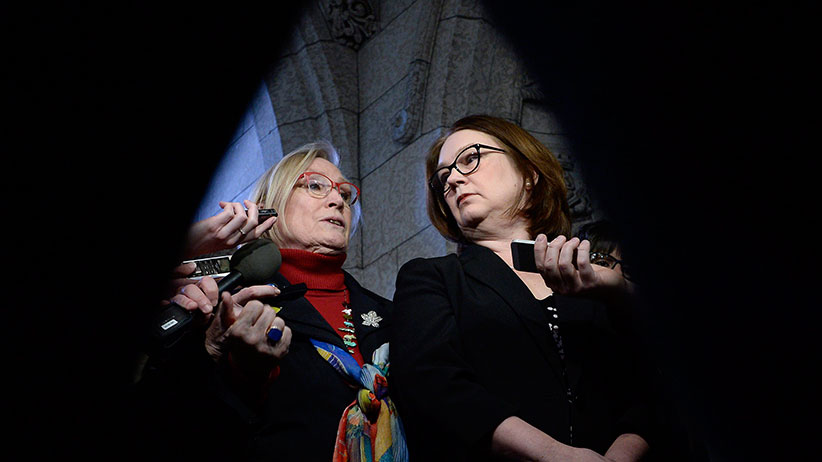 Minister of Crown-Indigenous Relations and Northern Affairs Carolyn Bennett, left, and Minister of Indigenous Services Jane Philpott speak to reporters after meetings with the family of Colten Boushie on Monday, Feb. 12, 2018. (THE CANADIAN PRESS/Justin Tang)

In the wake of the trial of Gerald Stanley, the Saskatchewan farmer found not guilty last Friday in the shooting death of Colten Boushie, Canadians who already feel jaded about discussion over all sorts of Indigenous issues might wonder if this is another case where the arguments are open-ended, the underlying causes seemingly intractable.

And it’s true that sweeping problems are being raised, ranging from the social divide between Indigenous and non-Indigenous people in Saskatchewan, to the way police investigate crimes with First Nations victims. But on at least one precisely defined sore point—the process for jury selection that allows potential Indigenous jurors to be excluded—the Boushie family’s lawyer said today a “quick legislative fix” is in order.

Chris Murphy, a Toronto-based defence lawyer, is in Ottawa this week with Boushie’s mother, Debbie Baptiste, and his cousin, Jade Tootoosis, for meetings with senior politicians. They met today with Crown-Indigenous Relations Minister Carolyn Bennett and Indigenous Services Minister Jane Philpott. A potentially even more crucial session is slated for tomorrow with Justice Minister Jody Wilson-Raybould and Public Safety Minister Ralph Goodale, and federal officials confirmed this afternoon that that the family will also meet with Prime Minister Justin Trudeau.

Wilson-Raybould is on the record as concerned about Canadian law that allows lawyers, before jury trials, to reject a certain number of prospective jurors, without giving any specific reason, through what are known as “peremptory challenges.” There’s no controversy around a separate mechanism, called “challenges with cause,” under which an unlimited number of potential jurors can be rejected after a judge asks them pre-approved questions, establishing whether or not they would bring an unacceptable bias to deliberating on the trial.

Murphy spoke emotionally today about jury selection for Stanley’s trial, and how five possible jurors who looked Indigenous were challenged by the defence, which meant they were ruled out. Talking with reporters, here’s how he described that scene at a Saskatchewan community centre, starting with a random draw of possible jurors, from which the 12 who ultimately made up the jury were chosen:

“They drew 45 names out of a drum, and five of those people appeared to be Indigenous. And the fourth person to come up was a beautiful man, long hair, and a twinkle in his eye. I’m a defence lawyer and I thought before this selection process, there is no chance that there will ever be an Indigenous person on this jury. And I saw him walk up, and even I had a brief glimmer of hope that this guy was going to make it on. He walked up and, ‘Accused look upon the juror, juror look upon the accused,’ and the word ‘challenge’ came out. And then four more, challenge, challenge, challenge, challenge.”

Murphy said this predictable pattern of rejecting Indigenous-looking jurors in trials where the victim or the accused is Indigenous shouldn’t be allowed, and could be ended easily by doing away entirely with peremptory challenges. He said they are generally based on little more than the appearance of the prospective juror. “You get to eyeball that person for three seconds before you make the decision. And so if you’re an Indigenous person watching this process, what are you to think? What is this decision based on?”

Murphy admitted that, as a defence lawyer, he used to think being able to reject jurors based on how they look was a legitimate tool for trying to get a balanced jury. Now, he has changed his mind.

“Of course, everybody wants an impartial jury. But there are a lot better ways to determine partiality or bias than looking at a person’s skin. And so let’s change it,” he said. “It’s an easy fix. Not many people would disagree with it, but maybe some defence lawyers. I’m one of them and I don’t disagree with it anymore. I would have a year ago, I would have disagreed.”

On Saturday, Wilson-Raybould, a former regional chief of the B.C. Assembly of First Nations, and a descendant of the Musgamagw Tsawataineuk and Laich-Kwil-Tach peoples on Vancouver Island, tweeted: “My thoughts are with the family of Colton Boushie tonight. I truly feel your pain and I hear all of your voices. As a country we can and must do better—I am committed to working everyday to ensure justice for all Canadians.”

Stanley was found not guilty of second-degree murder after a trial in which he testified that his gun “just went off,”  killing Boushie, a 22-year-old Cree man from Saskatchewan’s Red Pheasant First Nation. Murphy declined today to comment specifically about the possibility of an appeal being launched by Crown prosecutors in Saskatchewan, preferring to talk about how Boushie’s family is trying to open up a dialogue this week with federal politicians.