The Colvin Affair: Who knew what when? - Macleans.ca 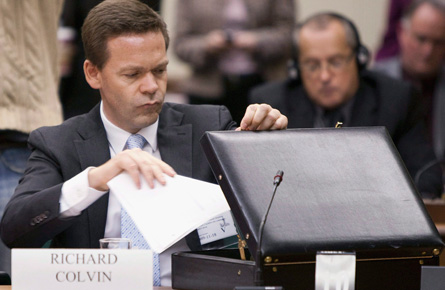 I confess to some bafflement at the government’s handling of the Afghan prisoner story: a story that would be more of a crisis if Canadian forces were still handing over captured prisoners to the Afghan government without insisting on adequate safeguards and outside supervision. But everyone agrees, I think, that that is no longer the case.

It was the case in 2006-07, when a previous prisoner transfer agreement was in force, and Richard Colvin was writing all those memos warning his superiors of what he was hearing about conditions in the Afghan jails. And presumably it was the case before then, when the Liberals, who negotiated that earlier agreement, were in power. But the agreement was changed in 2007, by the Tories. So you’d think that would be the Tory story: We fixed the problem.

Granted, it’s a scandal if anyone was tortured on our watch at any time, the more so if, as Colvin alleges, senior government officials knew about it, and did nothing. But it’s much less of a scandal if, once apprised of it, they acted to stop it, albeit after much delay. Afghanistan is a chaotic place, and it’s conceivable that it would have taken some time to investigate the charges and verify their accuracy.

So why is the government investing so much energy in impugning Colvin’s credibility? It’s one thing to say, as I think we must, that his evidence is less than bullet-proof: he was told that torture was going on, by sources he considers credible, but has no direct knowledge of it; he told David Mulroney, the deputy minister responsible for the Afghanistan Task Force, and Michel Gauthier, the head of Canadian forces in Afghanistan, of his concerns, and believes that Rick Hillier, the chief of defence staff, and Margaret Bloodworth, the Prime Minister’s national security adviser, also knew; and so on. Colvin is credible, but he is not omniscient. He has levelled some very serious charges at a number of people — essentially, that they knowingly acquiesced in torture — and it’s critical that they be given a chance to respond. (A public inquiry? I don’t think we’re at that stage yet. The Commons Special Committee on Afghanistan, before whom Colvin testified, seems the more appropriate forum.)

But it’s another thing altogether to imply that Colvin is some sort of whack job or stooge of the Taliban. As others have pointed out, his sterling career track — he’s now a senior intelligence officer at the Canadian embassy in Washington — hardly bespeaks eccentricity or incompetence. And if, as the government maintains, there was no reason to believe what he was saying was true — on a balance of probabilities, at least — then why did the government eventually change its practice? If no one in government even knew there was a problem, how could anyone have given the orders to fix it?

Whatever the truth or falsehood of Colvin’s reports, it is scarcely credible that they would not have been passed up to the highest levels: not just in the bureaucracy, but the cabinet as well. If the Minister of National Defence at the time, Gordon O’Connor, did not know, he surely should have; if bureaucrats insulated him from that knowledge, to preserve “plausible deniability,” that is a mark against him as much as them, for not establishing as an inviolable rule that he should be kept abreast of all such sensitive matters.

But the more likely proposition is that he did know. And if he knew, it is equally likely that the Prime Minister would have been told. Again, I don’t find that damning in itself: once told, they acted, even if it now appears rather too slowly. What’s indefensible is for ministers to have lied about what they knew, especially to Parliament — or, if they did not know, for officers and bureaucrats to have deliberately kept them in the dark. The more the government attempts to shoot the messenger, the more one suspects one of these will prove to be true.