The Commons: A bridge too far

'A fake lake, fiddlers and a landlocked boat were just the beginning' 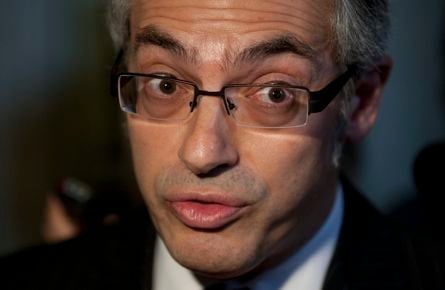 The Scene. The leader of Her Majestry’s loyal opposition very nearly growled at the Prime Minister. And having lamented the agenda, expense and organization of this month’s G8 and G20 summits, he turned metaphorical.

“A bake sale would not be run like this. A children’s birthday party would not be planned like this,” Michael Ignatieff posited. “Canadians have to pay the bill. How is the Prime Minister going to explain to Canadians that he has lost control of Canada’s summit?”

The Prime Minister stood and translated this into terms he could understand. “Mr. Speaker,” he said, “the Liberal Party seems extremely angry that Canada is leading the world right now in terms of the economy.”

The government side jeered.

“But we cannot cheer $1.3 billion in waste,” the Liberal leader finished.

With the grand and overarching condemnation thus stated, the Liberal leader turned to his assistant prosecutors to explore the specifics.

“Mr. Speaker, a fake lake, fiddlers and a landlocked boat were just the beginning,” Mark Holland reported in his typical baritone. “A drive around the industry minister’s riding reveals a tour de pork: $50 million dumped on distant gazeboes and goodies under guise of a day of G8 meetings to re-elect the minister. Even if the delegates wanted to drive 80 kilometres away to see it, they cannot because most of it is not finished. Some of it has not even been started. This is not a G8 legacy fund. It is a slush fund for a minister gone wild. Did the Conservatives refuse to move both summits to Toronto and save half a billion dollars so they could give cover to this pork?”

With slideshow, bar graph and bullet points, the Liberals seemed intent this day on shaming Tony Clement, the cheesed-off Minister of Industry and side-burned member for Muskoka-Parry Sound. As Mr. Holland round aloud this indictment, Mr. Clement alternately frowned and pretended not to notice.

Whatever Mr. Clement’s responsibility for these endeavours in his riding, and whatever this government’s recent enthusiasm for ministerial responsibility, it was Transport Minister John Baird who was sent up to respond. “Let me be very clear. All of the G8 projects have already been completed or are expected to be completed in the coming weeks. We are proud of them. They are creating jobs as part of Canada’s economic action plan, and that is good for this country,” he proclaimed. “What I can say is that the Liberals’ repeated attempts to mislead, to say untrue things and spread falsehoods will not work.”

As Holland stood to pronounce more scorn—”A $1 million bridge to nowhere, 42 kilometres away, that has not even been started, to $2 million for park improvements 135 kilometres away that is currently mud,” he cried—Mr. Clement leaned over to advise Mr. Baird. Up then, again, came the Transport Minister. “Mr. Speaker, let me speak very directly to the project the member opposite speaks of,” Mr. Baird offered. “He speaks about a bridge in Kearney. This is not a G8 summit project and has nothing to do with the G8 summit project. Just because the member opposite wants to spread mistruths does not make them true.”

After Mr. Baird had finished with an accusatory flourish, Mr. Clement rose to applaud, smirking ever so slightly in Mr. Holland’s general direction.

Alas, we were not yet through with this small matter of the bridge in Kearney.

Once the Bloc Quebecois and NDP had taken their turns, Liberal Marcel Proulx stood with a bulletin of sorts. “Mr. Speaker, the Minister of Transport, Infrastructure and Communities just said a few minutes ago that the project for the bridge was not part of the G8 fund,” he reported. “I have in front of me the press release of June 25, 2009 saying the contrary.”

Some degree of back-and-forth ensued. “Mr. Speaker, I will confirm once again that the bridge in question is not a G8 legacy project,” Mr. Baird assured. “Let me be clear, it is not true, it is a falsehood, and the Liberals should stop their fearmongering.” From his seat, Mr. Clement exchanged heckles with the Liberal side.

This dispute was now obviously too great to be dealt with within the confines of QP and so shortly after three o’clock, both Mr. Baird and Mr. Proulx were up with their hands in the air, attempting to win the attention of the Speaker on a point of order.

Mr. Proulx asked for unanimous consent to table exhibits A and B in his case, but was denied by loud shouts of “no” from the government side. Back then to Mr. Baird who rose to report that $730,000 assigned to the town of Kearney was, in fact, for improvements to Main Street and the sewers.

The Speaker had by then heard enough. “This is a dispute as to facts,” he said. “I do not think this is a point of order.”

Here ended, if only momentarily, the matter of Kearney’s bridge.