The Commons: A little light reading 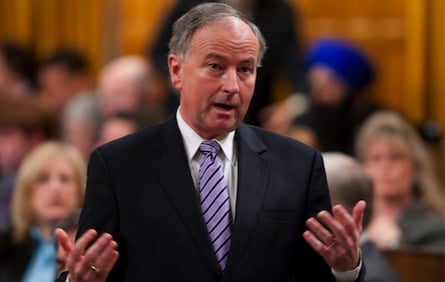 The Scene. Bob Rae sat with a great pile of paper on the desk in front of him. And after Michael Ignatieff and Lawrence Cannon had dealt with the question of what the government might say if the Americans were to ask about the possibility of Canadian troops staying a bit longer in Afghanistan, Ujjal Dosanjh stood to question the Conservative side about this pile of paper.

“Mr. Speaker, the government appointed Mr. Iacobucci at the last minute on a Friday morning, then took two weeks to release his terms of reference, and this morning, dumped some torture documents in the House without Mr. Iacobucci reviewing them,” Mr. Dosanjh reviewed.

Then the question. Or, more specifically, four questions, the last of which was actually two queries put together. “What was the government’s objective in hiring him? Was it just a stalling tactic? Why is Mr. Iacobucci being circumvented? Does he have a real job or is this just more cover for this government?”

The Justice Minister stood and shrugged and mumbled. “Mr. Speaker, quite the opposite,” Rob Nicholson said, though in response to which of the above questions it was unclear. “Mr. Justice Iacobucci is going to undertake an independent, comprehensive review of all the documents. The government has said that officials will make all relevant documents available, and the tabling today is part of that process.”

At least as far back as November 23, days after Richard Colvin testified before a House committee, the opposition has been asking for documents related to this country’s handling of detainees in Afghanistan. And it was at least as far back as that afternoon that a minister in this government—in this case a beleaguered Peter MacKay—vowed a full and total review of the documentary evidence.

“Mr. Speaker, here is what we will do. I will do him one better,” Mr. MacKay had snapped that day in response to a challenge from Mr. Rae. “We will look at all the documents that will be placed before the parliamentary committee, going back beyond the time that we took office. We will see what his government’s record was and how it stacks up against the efforts that we have made to improve the conditions in Afghan prisons. We will look at all of that evidence and then we will see where conditions were improved, when actual investments were made and when the real work was done to improve the situation in Afghanistan, not the Liberals’ lame effort.”

The Prime Minister, absent from the House that afternoon on account of an urgent photo-op with the national lacrosse team, turned up the next day to place an asterisk at the end of everything his Defence Minister had just said. “The fact of the matter,” he said, “is the government has and will continue to make all legally available information available.”

Two and a half weeks later, unsatisfied with the government’s efforts to that point, the opposition moved and passed a motion demanding a forthwith release of all relevant documents in their uncensored form. The House then rose for its Christmas break.

The House was set to return in January, but 20 days after it rose the Prime Minister called the Governor General and asked that the House’s return be delayed until March. Parliament resumed on March 3 and on March 5, 85 days after Parliament’s demand for documents, Mr. Nicholson announced that former Supreme Court justice Frank Iacobucci would be asked to review the paperwork in question and advise the government as to what might be made public. Eight days after that, the government got round to providing Mr. Iacobucci with the terms of reference necessary for him to proceed.

Unsatisfied, the opposition parties demanded last week that the order to produce documents be enforced. The government demanded a chance to respond. A week later, it still has not done so, nor will it say with any specificity when it might.

Instead the parliamentary secretary to the government House Leader rose this morning and tabled 2,500 pages of variously redacted documents, none of which had been reviewed by the former justice this government has apparently charged to do just that.

It was perhaps with all this in mind that Ujjal Dosanjh rose for his supplementary and seemed to quibble with the Justice Minister’s use of the term “process.”

“Mr. Speaker, as I said, this government dumped some torture documents in this House. They have been ready since January to be released to the House, yet there was no translation, no copies. They were in no particular order,” he lamented. “This government has had three and a half months to provide these documents, yet its response today has been totally incoherent and totally disorderly, like chickens with their heads cut off. When will it provide a coherent answer to this torture scandal?”

“Mr. Speaker, at least we know how to vote,” Mr. Nicholson huffed, proceeding, without irony, to ask that the opposition let Justice Iacobucci do his work.

A short while later, the NDP’s Thomas Mulcair stood to declare that the government had only delivered today “two boxes of contempt” for Parliament. Quite besmirched, the Justice Minister responded that Mr. Mulcair should review the documents provided before passing judgment.

Mr. Rae was already doing just that. But he seemed, from afar at least, to be struggling to follow the plot, large black squares periodically obscuring the text. As he happened upon a series of pages blacked out entirely, Geoff Regan leaned over from his right with a spare pair of glasses, suggesting perhaps that Mr. Rae’s difficulty had something to do with his prescription.