The Commons: A mysterious stranger enters the story

Allegations about Guergis "came forth from a third party" 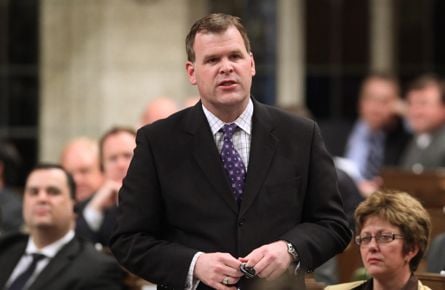 The Scene. Michael Ignatieff did not seem particularly enthused about the subject matter, but as he clarified for reporters afterwards, this is his job now and this is the place where these matters are meant to be aired.

“Mr. Speaker, on Friday the Prime Minister fired a minister, kicked her out of caucus, called in the RCMP and the Ethics Commissioner, and Canadians still do not know why,” he reviewed, trying to sound as serious as possible. “There are serious allegations surrounding the conduct of this minister, but we still do not know what they are. When will the government tell Canadians the truth?”

The government turned here to John Baird, their all-purpose refuter and obfuscationist. He did not, quite surprisingly, provide a date upon which the opposition could expect the truth to be tabled.

“Mr. Speaker, as the Prime Minister reported to Canadians this past Friday, allegations came forth from a third party,” Mr. Baird said, solemn and sober. “Those allegations were forwarded to officials at the RCMP and with the office of the Ethics Commissioner here in Ottawa. The RCMP and the Ethics Commissioner will come to their own conclusions, as is proper on this issue.”

Unfortunately, it was unclear to which prime minister Mr. Baird was referring. His prime minister, Stephen Harper, made no reference to this third party in his official statement last Friday. Nor does it appear the Prime Minister invoked any such mysterious source in speaking with reporters Friday afternoon.

The Liberal leader gave it another go. “For six long weeks the Prime Minister has got up and said she is doing a great job, and then ‘Hey, Presto,’ from Thursday night to Friday morning, he called in the RCMP,” Mr. Ignatieff recounted, creatively imagining Mr. Harper’s reaction. “Why?”

Mr. Baird broke character just long enough to smirk that he and Mr. Ignatieff had a difference of opinion before once more raising the spectre of the third party on the grassy knoll.

“Mr. Speaker, once again,” the Liberal leader pleaded, “who is the third party referred to in the minister’s reply?”

Mr. Baird repeated himself in reply. The Liberal benches yelped and Mr. Ignatieff waved for quiet.

The Liberals pressed on, apparently eager to make a prosecution of the matter. “Mr. Speaker, let us get specific,” Anita Neville helpfully offered. “The Minister of Transport, Infrastructure and Communities is responsible for administering the $1 billion green infrastructure fund. On September 3, 2009, the minister met with Rahim Jaffer in Ottawa. What did they discuss and were those discussions reported to the Commissioner of Lobbying as required by law?”

“Mr. Speaker,” Mr. Baird explained, “I am happy to confirm to the members of the House that Mr. Jaffer never made any inquiries with respect to his business.”

Quite surprisingly, the opposition side was not thus persuaded to stand down. “These are the same answers we heard from Mr. Chrétien and Mr. Gagliano,” Gilles Duceppe huffed with perhaps the afternoon’s cruelest blow.

The government side was mostly quiet. Ministers and backbenchers found themselves quite preoccupied with their Blackberries and paperwork. Few seemed to be paying enough attention to shout an appropriate heckle.

Jack Layton ventured a question on nuclear weapons, but after struggling to pronounce the word proliferation, he too turned to the more easily enunciated matter of Helena Guergis. “Mr. Speaker,” he advised, “the government has got to provide answers now so that we can put this sordid business aside and start to deal with the important issues affecting Canadians.”

John Baird seemed to agree that we should all move on, if not that it was his duty to provide answers.

Mr. Proulx tried again. The former minister of natural resources was also present at this reception. Had Mr. Jaffer, Mr. Proulx wondered, discussed anything with that minister?

“Mr. Speaker, Mr. Jaffer is in private life now,” Mr. Baird testified. “If the member opposite has any serious allegations to bring forward with respect to this case, I would expect that he should put any evidence on the floor of the House of Commons right now.”

Up now came Mark Holland, the dogged Liberal charged with making closing arguments. At the sight of the opposition critic, the Conservatives could no longer contain themselves, taunting and howling and mocking one of their least favourite Liberals. With his second question, Mr. Holland leaned forward, jabbed the air and emphatically pronounced his condemnation.

“From redacting documents, shutting down Parliament, to firing critical watchdogs and attacking the independence of the public service, the government loathes accountability. If a fact does not fit its rhetoric there is not a word it will not black out, an institution it will not shut down or a truth it will not conceal,” he sang.

“A minister was removed, a criminal investigation has begun and these are serious allegations that demand answers. Accountability is not an Act that was passed four years ago. It is the actions that are taken right now. What is the nature of these allegations?”

This was good stuff. At least for sheer entertainment’s sake.

Mr. Baird was humbled, or at least determined to seem so.

“Mr. Speaker,” he demured, “I do not share the opinion of the member opposite with respect to his conclusions on this issue.”