The Commons: A terribly serious discussion

Bob Rae on the case of Abousfian Abdelrazik 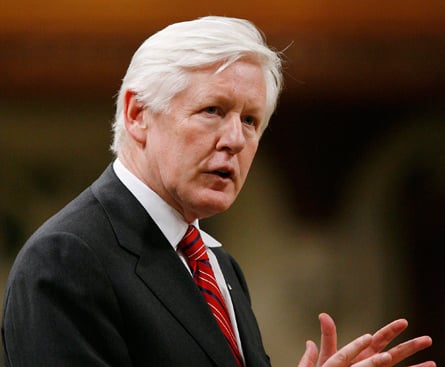 The Scene. In the absence of the Liberal leader, Bob Rae rose to ask the first question, receiving sincere applause from his side and a mocking ovation from the other. The Speaker called for order.

“I appreciate the expressions of support, Mr. Speaker,” Rae grinned, “as late in the day as they may be.”

Another round of applause from the government side. Then down to business. “I would like to ask the Minister of Foreign Affairs a question,” Rae began, proceeding to review the case of Abousfian Abdelrazik.

The story is roughly as follows. For the past year, Abdelrazik, a Canadian citizen, has been living in the Canadian embassy in the Sudanese capital of Khartoum, unable to return home. He was arrested in Sudan in 2003 and claims to have been tortured during 19 months in prison there. Accused of having connections to terrorism, he was never charged and has since been cleared by both the RCMP and CSIS. He remains, courtesy of the Bush administration apparently, on a United Nations list that seeks to ban the travel of potential threats. The Canadian government has asked that Abdelrazik be removed from said list and, for a time it seems, offered to let him come home if he could secure a plane ticket. But last month, Foreign Affairs Minister Lawrence Cannon denied Abdelrazik’s request for an emergency passport on the grounds of national security and the government has since said that the Canadian’s presence on the UN list bars him from returning. The whole tale is now before the Federal Court.

It was the latest news—that an official with the UN says its list in no way bars Canada from flying Abdelrazik back—that sent Rae to his feet.

“Now that an official for the United Nations who is responsible for the travel ban list has stated very clearly that in his opinion, there is no barrier to Mr. Abdelrazik’s coming back to Canada, in light of the fact that he is on the United Nations list and that this is seen to be such a major aspect of the government’s case in court with respect to Mr. Abdelrazik’s situation,” he explained, speaking slow and even, the House quiet around him. “I wonder if the minister could now explain to us, what is the problem that the government has with allowing this Canadian citizen to come home?”

Rae was surely not expecting much of an answer, so he was likely not surprised by what came next.

“Mr. Speaker, in the case of Mr. Abdelrazik, he does remain on the 1267 United Nations List of al-Qaeda and Taliban suspected terrorists. This individual is therefore on this list and this issue is now before the court,” Lawrence Cannon explained. “I will therefore refrain from making any additional comments on that issue.”

The Liberal side grumbled, the Conservative side maintained a rare silence.

Rae tried again to lay out the case. “Mr. Speaker, first the government said and the minister signed letters saying that he is not on an RCMP list; he is not on a CSIS list,” he said. “Then the government said that he should get a passport and agreed to give him a passport. Then it pulled back from giving him the passport. Then it said he should get a ticket, and hundreds of people have been prepared to give him a ticket. He is not on anyone’s list except for this travel list. Now the UN official said, ‘Whether it is Abdelrazik or anybody else, it is up to the state in question’—that is to say, Canada—’whether they want to allow the person to come back or not.’ The minister can no longer hide. There are no second class citizens in this country. Why is he not taking appropriate—”

His time had expired, the tale taking so long to tell, even in brief.

“Mr. Speaker, this does not change anything,” Cannon responded, standing straight and speaking authoritatively. “The Government of Canada takes its international obligations very seriously. In that regard I reiterate, he is still on the 1267 list and, as I mentioned before, this case is before the court and I will not make any more comments on this issue.”

The Liberal side grumbled once, the Conservative side maintained its rare silence.

Rae tried for a third time, now frustrated, his voice rising, his arms waving. “Mr. Speaker, the government is building a case against Mr. Abdelrazik which makes no sense,” he ventured.

What kind of terrorist, he wondered, would we let taken up residence in an embassy. What obstacle remains, he begged, if even the UN now says Canada is welcome to have Abdelrazik returned.

Cannon repeated himself. “The courts,” he concluded, “will decide the issue.”

The afternoon was not without its usual noise. Laurie Hawn rose shortly before questions to suggest the Liberals were in secret cahoots with the Putin regime in Russia. Ralph Goodale and Marlene Jennings took turns screaming invective at the government. There was some yelling over which side was precisely softer on crime.

But on the matter of Abousfian Abdelrazik there was but one lone audible heckler—a Liberal loudly wondering about Conservative interest in the rule of law. The matter perhaps so convoluted it stunned the House into relative silence.

A short while after Rae, Jack Layton took a turn at making sense of it all.

“Mr. Speaker, it is a bogus argument to suggest that Mr. Abdelrazik is on a list and that somehow prevents him from bring brought back to Canada,” he said, making sure to use his inside voice. “That has been made very, very clear by the United Nations official, Richard Barrett, who is the one is charge of the whole program. Why is the Conservative government pursuing an argument that the UN Security Council says is wrong? Either it does not understand its rights and obligations under international law, or worse, it is deliberately misleading this House and the court at the same time. When will it stop and bring him home?”

The Foreign Affairs Minister did not take kindly to the NDP leader’s insinuation.

“Mr. Speaker, it does not make any difference what the leader of the NDP says in this House and whether he casts aspersions on myself and the government,” he said, stating the obvious. “What I am saying to him quite clearly is this individual is still on the 1267 list that has been put together and that reunites people who are identified with al-Qaeda and who are identified with the Taliban. It is in front of the courts and that is where this litigation is going to be handled.”

No doubt the judicial branch appreciates Mr. Cannon’s deference, but Layton was by now exasperated.

“Mr. Speaker, every document that has come to light, every report that has been done, all the information that becomes available, whether from the RCMP, from CSIS, from the United Nations, all clear Abdelrazik and they show how much contempt the government has for basic human rights of Canadian citizens,” he offered.

Then, in a generous touch, he presented Cannon with an option.

“If the government thinks he has done anything wrong, there is something it can do about it,” Layton informed. “Bring him back, lay charges and put him on trial, but it will not do that. So how much longer is the government going to leave this man on a cot in a Canadian embassy in the Sudan? How long are we going to leave him there?”

“Mr. Speaker, I want to reassure the colleague that we take our responsibility in terms of safety and security, in terms of our international obligations very seriously. In that regard, we will assume our responsibilities,” Cannon said. “The case is now being pleaded in front of the courts and we will wait for a decision on that.”

After a few rounds of debate on other matters, the Bloc sent up the diminutive Francine Lalonde, who wondered if perhaps Mr. Cannon had attempted to speak with the United Nations on this issue. The minister repeated himself.

Rising again, Lalonde wondered aloud about the minister’s understanding of overseas travel. Cannon dismissed her confusion and repeated himself.

It was, by recent standards, a terribly serious discussion.