The Commons: Ah yes, the lives that are at stake

Perhaps we'll soon get around to debating actual policy 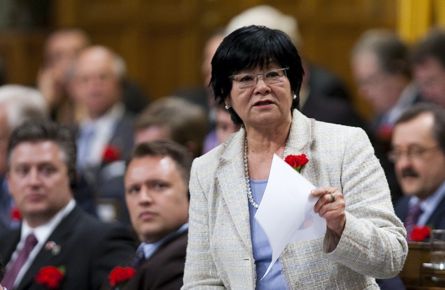 The Scene. The Prime Minister’s empty chair did not seem likely to answer, but Michael Ignatieff went ahead anyway and wondered whether Mr. Harper might commit to restoring the funding of 11 women’s groups whose cuts came a day after a Conservative senator profanely advised an audience of aggrieved advocates to mind their p’s and q’s.

John Baird stood in Mr. Harper’s place to claim both facts and platitudes. “Mr. Speaker, let me be very clear,” he said, “this government is giving a record amount of funding to support women’s groups. We do have one big criteria, we want less talk and more action.”

The House was left to judge the applicability of this. Mr. Ignatieff was not satisfied and rose again to expand on his exposition.

“Mr. Speaker, when women’s groups speak out, they get their funding cut,” he reviewed. “When public servants like Richard Colvin testify, they get smeared. When independent watchdogs try to do their job, they get fired. When Parliament asks tough questions, the Conservatives shut the Parliament down. When will the Conservative Party and the government stop intimidating their critics and start listening to them?”

There was much whining and yapping from the government side.

Mr. Baird rose again. “Mr. Speaker, this government is always open and transparent,” he ventured to great gales of theatric laughter from the Liberal side. He continued here to expound on the Accountability Act, the Access to Information Act, and the Canadian Wheat Board.

Mr. Ignatieff grimaced, shook his head and then tried once more with his back-and-forth poetry of good and evil. “Mr. Speaker, instead of welcoming debate, the Conservatives stifle it; instead of answering questions, they duck them; and instead of treating our institutions with respect, they try to shut them down,” he said.

“This is a big issue here. It is about whether the government respects democracy. That is the fundamental issue,” he continued, now lecturing. “When will the Conservatives stop the smears, stop the attacks, stop the intimidation and start showing the Canadian people some respect?

His eyebrows dropped low as he glared this last bit.

Mr. Baird came up grinning, struggling seemingly to take even himself seriously as he invoked an upcoming vote on firearms registration.

The pattern of the day was thus set. The opposition side persisted in pursuing questions of the government’s willingness to hear dissenting opinions—what Bob Rae deemed the government’s “STFU strategy”—and the government persisted in insisting on speaking to other things entirely. Mr. Baird, at one point, recalled the words of Martin Luther King Jr. And thus exhausted, he turned matters over to his protegé, Pierre Poilievre, who did the Transport Minister proud with references to both the Lobbying Act and the coalition.

In the midst of it all, if briefly, discussion turned to the matter that was the inspiration for Nancy Ruth’s four-word call to quiet.

“I know that Canada hosting the G8 will make a difference to the lives of mothers and children in developing countries,” International Development Minister Bev Oda said when pressed by Gilles Duceppe about the government’s attitude toward abortion, “because we want to actually save lives and make their lives better.”

Ah yes, the lives. The actual human beings whose lives will be impacted by whatever is done here, whose lives we are essentially, if quite indirectly, speaking of. Herein lies the debate we are apparently not supposed to pursue.

“What I want to ensure is that that side of the House has done its homework,” she said under questioning from the Bloc’s Nicole Demers. “If they go to the USAID website, they will find that the USAID does not support the funding of equipment, the training of people who perform abortions, neither does it support research into abortion. They should do their homework. We know the facts and we know how to really make a difference for the lives of mothers and children.”

This was, apparently, a reference to Section II, Part 6 of the Mandatory Standard Provisions for U.S. Nongovernmental Recipients, a document freely available through the website of USAID, the agency of the American government charged with managing foreign aid.

Mind you, also available at the website of USAID is an explanation of President Barack Obama’s decision in January 2009 to rescind the so-called Mexico City Policy. And then, at the website of the Secretary of State, there is what Hillary Clinton has had to say on the issue.

And so it would seem there is some discussion to be had about what precisely the American approach is here. And then, one assumes, there would seem to be the makings of a rather serious debate about the Canadian policy.

And perhaps we might even, at some point, talk about that.

Or perhaps we would rather shut the f— up.

The Stats. Shutting the f— up, 15 questions. The oil industry, five questions. Helena Guergis, four questions. Economic development, three questions. Firearms, the Supreme Court and the environment, two questions each. Ethics and Haiti, one question each.