The Commons: Checking in on Michael Ignatieff's inevitable doom

Has he forgotten the effort that goes into constructing a narrative? 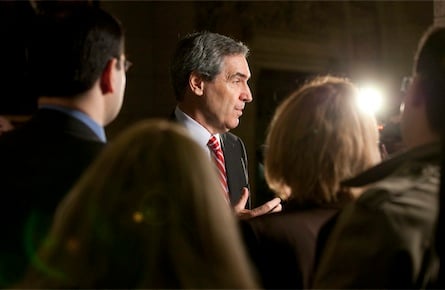 It is a tradition that binds us together as a nation, our eternal obsession over the ever-imminent downfall of our elected leaders. And so we return now to the question of just how profoundly, unavoidably, indisputably screwed is Michael Ignatieff.

At last report, he was most immediately doomed by Monday’s by-elections. As the conventional consensus had it, the Liberal party was to lose all three. Defeat in the former Liberal stronghold of Vaughan would be particularly resounding—it would be what Outremont was to Stéphane Dion. What once was a Liberal caucus of 77 would be reduced to a mere 76. Everything else would subsequently come crashing down around Mr. Ignatieff. By Christmas, he would be deposed as leader. By spring, he would be bussing tables at Harvey’s on Elgin Street. His household’s cats, Mimi and Eric, would hiss at him when he returned home from work each day.

As the day dawned on Tuesday in the capital, it was but a trifle that Monday night had not at all gone according to plan. The Liberals had indeed lost Vaughan, but by just less than a thousand votes. Meanwhile, the Liberal candidate in Winnipeg-North was victorious in a riding the party had not won in 17 years. What was a Liberal caucus of 77 is still a caucus of 77. He had broken even. He had exceeded expectations.

Rest assured, the Liberal leader is still destined to soon be asking the public not for their support, but rather whether they’d like fries or onion rings with that. “Vaughan by-election loss adds to Ignatieff’s woes” explained a Globe headline this morning, that atop a story that spoke ominously of “Michael Ignatieff’s troubled leadership.” “For Ignatieff,” preemptively eulogized a Conservative operative now lending his analysis to the National Post, “his days are numbered”

Though a doomed man, he arrived this morning to the House foyer looking mostly undead.

“Good morning,” he said after adjusting the microphone for his height. “Just a few thoughts about the by-elections.”

A couple dozen reporters huddled around to hear just how and when he had decided to resign in shame.

“When we look at these results, what we’re seeing, I think, is the next election is shaping up as a clear two-way choice, Liberal, Conservative,” he said, seeming to assume, somewhat boldly, that he’ll still be around whenever the next election is called. “You want an alternative to the Stephen Harper government, you want social compassion, fiscal responsibility, environmental action, international engagement, you vote Liberal at the next election. That’s, I think, the conclusion we draw.”

It was puzzling for sure to hear Mr. Ignatieff speak in this way. Was he not once a journalist? Has he forgotten the effort that goes into constructing a narrative—the time and energy that is spent connecting random and isolated events into simplistic and easily digested assessments? Does he not understand the obvious meaning that can be derived from the votes of 70,000 individuals in a country that saw 13-million ballots cast in the last election?

He praised the candidate and volunteers in Winnipeg, as if that mattered. He lauded the effort of the Liberal in Vaughan, as if anyone was listening.

What, someone asked, was the message to be taken from the party’s defeat in Vaughan?

“The message is there’s a Liberal vote there, we have to get it out,” he ventured. “Mr. Fantino was the star candidate, expected to walk, expected to just stride into the House of Commons of Canada and he learned that a peek-a-boo campaign will cost you. He learned to never underestimate the Liberal party and we feel confident we’ll get it back in the next election.”

This was a decent effort at offering an alternative theory, but it lacked the snappy simplicity of saying that Vaughan was his Outremont: the Quebec stronghold Mr. Dion lost in 2007, thus foretelling his demise in that province and elsewhere. (For the sake of the preceding sentence, it is generally advised that one ignores the Elections Canada figures that show the Liberal seat and vote count actually improved in 2007 under Mr. Dion from the result in 2006 when Paul Martin, having fulfilled expectations of a 200-seat majority into perpetuity, led the party.)

“My lesson from today’s election: roll up our sleeves, we’ve got more work to do,” he continued awhile later, apparently declining to acknowledge that this work is most obviously futile.

“Look, I respect how all Canadians cast their vote. I’m just saying, when you look at what happened, in Winnipeg-North and elsewhere, the Green vote negligible, the NDP vote falls … We think that as you reflect on those results, you think, yeah, there are two choices at the next election: there’s a Liberal choice and there’s a Conservative choice,” he added, continuing to reject one reality and substitute his own. “And anybody who wants to get rid of this government … those people have got to look at those results and think, if we want to get rid of Mr. Harper, there’s only one place we can go.”

He did little to repress a smile, the corners of his lips turning upwards as he spoke. And he bent at the knees to emphasize various points as he does when he is excited. He seemed not to understand that his fate had already been decided.

A dissenting scribe spoke up that Vaughan was a “warning sign.” “I mean, you guys held that riding for a generation and in waltzes Fantino and he wins,” he recounted.

The debate was now semantic.

“The word waltz, I’d have a question,” Mr. Ignatieff laughed. “He had to fight hand-over-hand-over-hand. He thought it was a going to be a waltz, it was a dog fight. So everybody draws lessons.”

“The lesson I draw is roll up your sleeves,” Mr. Ignatieff persisted, “we’ve got more work to do.”

A short while later, Jason Kenney turned up at the same microphone to pronounce upon the Conservative party’s great gains and mispronounce a half dozen times the Liberal leader’s surname.

“This,” he declared, “is a time of reckoning for Mr. Ignatieff.”