The Commons: Derek from Toronto and other expressions of democracy - Macleans.ca 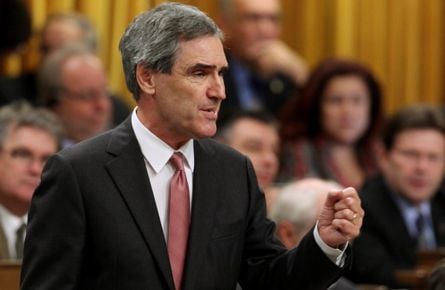 The Scene. Michael Ignatieff, attempting to combine his day job as a politician and his after-hours work as host of a late night phone-in radio show, surrendered the floor this afternoon to Derek from Toronto.

“My question relates to the fiscal waste and mismanagement that this government is doing,” Mr. Ignatieff said Derek said.

“They emptied the cupboard. Their spending is a hodge-podge with no real vision or direction. Why is the Prime Minister throwing away my generation’s money in such a reckless, incompetent and visionless way?” Derek begged by way of the Liberal leader. “Why?”

The Liberals stood here to applaud Derek, or Mr. Ignatieff, or Mr. Ignatieff’s relating of Derek’s concern, or perhaps all of the above. And obviously quite moved by this expression of concern from a real person, the Prime Minister came up quick to respond.

“Mr. Speaker,” he said, “actually nothing could be further from the truth.”

You see, what Derek apparently misunderstood was the necessary pragmatism and comparative greatness of the deficit spending the Prime Minister had promised never to pursue.

“The fact of the matter is this,” the Prime Minister explained. “Obviously, as we all know, we had to run a deficit over these past couple of years.”

Indeed, only a fool would have ever believed the contrary could be guaranteed.

“That said,” Mr. Harper continued, “the deficit of this country is by far the lowest among the major advanced economies.”

And so cheer up, Derek: however disenchanted you may feel with the state of things here, imagine how dreadful it would be to live anywhere else. Always look on the bright side, young chap.

Unsatisfied on Derek’s behalf, Mr. Ignatieff sought to clarify his, which is to say Mr. Ignatieff’s, or possibly Derek’s, concerns. “Derek’s question was not just about the waste and mismanagement of the government,” the Liberal leader ventured, “it was about the government’s wasteful priorities: billions on superprisons; billions on a stealth aircraft without a competitive bid; a billion on a wasted [G20-G8] photo op.

“What Derek cannot understand is not only the waste and the mismanagement, but how does the government justify those wasteful priorities?”

It was by now apparent that the Prime Minister had not arrived prepared this day with his own real person to which to refer. So, ever the strategic genius, Mr. Harper instead dreamed up a character for the moment—a loathsome scoundrel he named “the Leader of the Opposition.”

“The real issue here raised by the Leader of the Opposition is his priorities,” the Prime Minister declared, carrying on quite demonstratively as if to warn the villagers of this monster’s imminent arrival. “He says that he would ground the Canadian Air Force. He says that he would put criminals out on the street. Why? In order to justify a bunch of tax increases he wants to bring on employers. That is the kind of thing that would put the Canadian economy into a deep ditch.”

“Let us talk about the government’s record,” the Liberal leader offered.

The Conservatives applauded, a bit too soon perhaps.

The Prime Minister stood and pronounced himself “delighted” to talk about his government’s record. He then though revealed his misgivings about the invention of the secret ballot.

“As we know, in terms of the specific question, there is a secret vote at the United Nations,” he explained for the benefit of the House. “These things are inherently difficult to predict, regardless of the fact that we had secured written approval from the vast majority of the countries, but the fact of the matter is this: Precisely because these things are not predictable, we do not base Canadian foreign policy on them. We act according to Canada’s values.”

Ill-fated promises, unpredictable results, secret votes—democracy is for sure a mysterious and troublesome thing. Most leaders, at least after having gained power, would be well-advised to stay clear of it.