The Commons: Finally, a straight answer

And yet, the day passed without much more in the way of insight 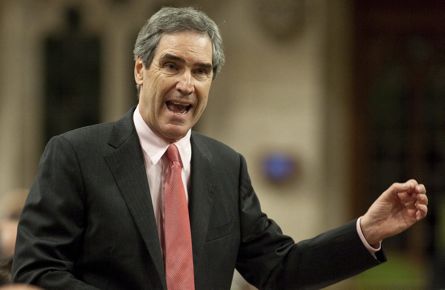 The Scene. Mark Holland walked out into the foyer and, surrounded by cameras, gamely tried to explain that he was not particularly interested in the cocaine and hookers, that this was about much more fundamental matters of governance and accountability. A short while later, Libby Davies, in sandals, strode out and, surrounded by microphones, attempted to parse the difference between the Conflict of Interest Code and the Conflict of Interest Act. The assembled reporters gamely pretended to be interested.

Alas, Day whatever-this-is of whatever we’re calling this crisis (“The Gaffer Affair” seems both a tidy and au courant moniker) passed without much more in the way of insight. Which is perhaps precisely the problem.

The Prime Minister was not amused by this ribald experiment in parliamentary humour. “Mr. Speaker, of course, as I have said before, once I received some information related to the minister, that information was appropriately given to the authorities,” Mr. Harper shrugged. “We took the appropriate action and the authorities will fulfill their responsibilities.”

The Liberal leader sought to up the rhetorical ante. The affair, he said, was obscured behind a “smokescreen of secrecy.” The Prime Minister, he ventured, had acted on “second-hand information” provided by “some gumshoe.”

“When,” Mr. Ignatieff pleaded, “will the Prime Minister stand in this House and tell Canadians the truth?”

The Prime Minister did not quite answer this, but he did reveal that the “serious allegations” in question were, in fact, based on “serious information.” Whatever that means.

Sometime after this, Gilles Duceppe rose and dared suggest the Prime Minister was only speaking in generalities. It was unclear if this was intended to be a compliment, but it was most likely received as one.

Slapping his desk and waving his finger and generally carrying on to such a degree that he nearly levitated off the ground, Jack Layton begged and pleaded for the House’s attention on another matter. He was more or less ignored. Instead, after Mr. Layton’s demonstration, Mr. Holland returned us to the matter of Ms. Guergis and Mr. Jaffer, Mr. Holland and the Conservative side differing over the precise requirements of the Lobbying Act.

Then it was Frank—though the House stenographers insist on referring to him as “Francis”—Valeriote’s turn to rise from the back row and make a great show of asking a question as if he were playing the part of a smalltown lawyer in a TV movie about some trial taking place in the southern United States.

“Mr. Speaker, the Federal Economic Development Agency for Southern Ontario, otherwise known as FedDev, needs to focus its limited resources on considering only projects of clear merit that will create long terms jobs for Ontarians,” he offered. “Can the minister in charge of FedDev confirm that his Director of Operations, Andrew House, met with representatives of Sustainable Ventures Inc. last fall on behalf of a number of its clients?”

This was merely the set-up. And after Gary Goodyear, the minister of state for science and technology and the federal economic development agency for southern Ontario and a part-time motorcycle rebuilder, had offered a perfectly benign response, Mr. Valeriote went for the right hook.

“Mr. Speaker, normally when people vying for funding from FedDev met with Andrew House or other members of the minister’s staff they registered those meetings with the lobbying commissioner as the law requires. After all, as a former Conservative candidate in both 2006 and 2008, Mr. House knew the accountability act well,” Francis explained. “Can the minister confirm that Rahim Jaffer’s business partner, Patrick Glémaud, presented four specific client proposals for funding to Andrew House on behalf of Sustainable Ventures Inc. and while he is at it, can he also explain why none of this was registered with the lobbying commissioner?”

Mr. Goodyear was more than ready for this. “Mr. Speaker, first of all, the member is absolutely incorrect,” he snapped. “It was three projects.”