The Commons: He momentarily misplaced his discretion 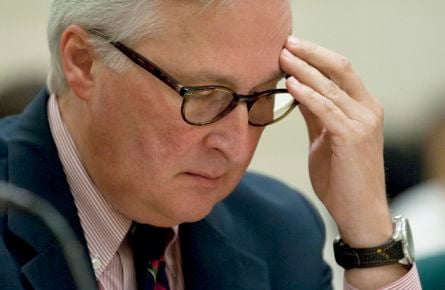 Perhaps the best one can say for Richard Fadden, director of the Canadian Security Intelligence Service, and as such the man responsible for protecting our most sensitive secrets, is that when his two hours before committee today were complete, he rose from his seat, turned toward the door and walked past reporters without taking a question.

This is progress. Quiet progress.

Mr. Fadden, today in a dark blue suit, sporting dark-rimmed glasses and a tan, had spent the previous two hours attempting to wiggle free from a fiendish trap of his own design. In March, before an audience of police, security and military experts, he spoke of “foreign interference” in Canadian politics, going so far—without naming names, mind you—as to suggest that two provincial cabinet ministers might be under the influence of such suasion. And so here he sat before 10 MPs, each trying to understand precisely what he had been talking about, or at least why he had felt the need to say as much.

Behind Mr. Fadden, sat a couple dozen or so reporters, each finding refuge from the heat wave outside, or at least something to do on a quiet July morning in Ottawa. Months before his comments about the political class, Mr. Fadden had, coincidentally, told another audience—without naming names, mind you—that the “media” was rife with terrorist sympathizers. And so here Mr. Fadden must have surely felt surrounded.

He arrived 10 minutes before he was due, prepared with an opening statement, copies of which were laid out, in both French and English, for reporters in attendance. When the meeting was called to order and he was invited to proceed with his statement, he spoke briskly and fluently in both official languages. He rarely stumbled or deviated from his script.

Where previously he had relied on generalities, here he proceeded with equivocations. He believes Canadians should be “more informed about the threats Canada faces,” but he had never intended for his comments at the Royal Canadian Military Institute to be made public. He knew his speech that day was being filmed, but did not realize the Q&A session afterward would be as well. When later asked about the comments by a CBC interviewer, he felt he had little choice but to address them in a “forthright manner.”

He stands by his general message that foreign interference is a threat, but the examples he provided did not and do not “meet the criteria for us to consider them threats to the security of Canada.” As such, even though he considered those examples interesting enough to mention to a crowd of law enforcement and military types, he did not deem them serious enough to pass on the Minister of Public Safety. Neither had he briefed the Privy Council Office about the specific cases in question, though he had spoken generally about them to the National Security Advisor, who works within the Privy Council Office.

He raised the matter of “loyalty” to Canada, but then dismissed the suggestion that the individuals in question might be “traitors,” seemingly because they had not met the technical definition of treason. This was all apparently a cause for great concern, but it was not necessarily a violation of the law.

“I agree that this was not the optimal way in which to have this matter raised in public and wish this had turned out differently,” he said at one point and on this, and perhaps only this, there can be almost no quibble.

After a few questions from Liberal Marcel Proulx, the Bloc’s Maria Mourani took the opportunity to scold. “You don’t realize what you’ve done,” she said, wagging a finger in Mr. Fadden’s direction.

The NDP’s Don Davies, who would try unsuccessfully to convince Mr. Fadden that his unspecific allegations had unfairly cast suspicion upon various groups and classes, attempted to glean specifics, asking for the identities of provinces, municipalities and individuals in question. Mr. Fadden demurred, on the entirely reasonable grounds of operational security.

Mr. Davies made reference to the recently demoted U.S. general Stanley McChrystal, Mr. Fadden dismissed the parallel. There was some debate as to whether or not Mr. Fadden had violated the CSIS Act. “Mr. Fadden,” the Bloc’s Mario Laframboise concluded quite simply, “you speak too much.”

Perhaps the most troublesome stuff for Mr. Fadden had to do with the time and place and circumstance of his remarks. The occasion was apparently a black tie reception entitled Police Appreciation Night at the RCMI. CSIS had apparently agreed to let the CBC film the proceedings.

Here it was the government side that produced pictures from that evening that clearly demonstrated the presence of a man with a large television camera on his shoulder. And it was on this that Mr. Fadden most struggled to sustain his argument.

“I lost the sense that I was being filmed,” he said.

“I simply lost track of that during my remarks,” he said of the cameraman’s presence.

“I regret the level of granularity,” he said.

Twice the head of our national spy service referenced the Chatham House Rule. From just about any other official of government this might’ve seemed merely silly.

Nearer the end of the session, Ms. Mourani raised a point of order seeking to ask that the committee recommend Mr. Fadden be asked to resign. Mr. Davies, as committee chair, said the proposed motion would be taken under consideration. A short while later, Mr. Fadden was allowed to take his leave. Whatever the case, it will likely be better for Mr. Fadden if this is the last we ever hear of him.