The Commons: Her Majesty goes to the museum

And looks "sternly" at a menacing wolverine inside 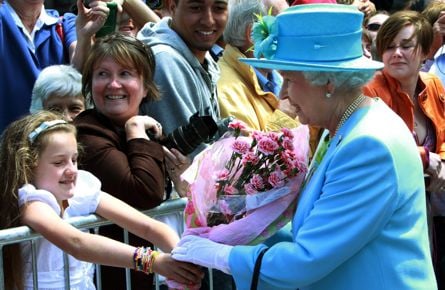 A girl gives Queen Elizabeth some flowers as she walks by well-wishers after visiting the Canadian Museum of Nature in Ottawa, Wednesday June 30, 2010. (THE CANADIAN PRESS/Fred Chartrand)

One person—the lone identifiable protester, though his exact cause seemed a bit obscure—wore a bear suit. Some ladies arrived in dresses. One young man wore a suit. Another young man wore a Wendel Clark jersey. Many clutched flowers. Several adults carried children. Someone had brought along a corgi, hoping maybe to have the canine autographed or blessed or formally adopted.

All here, lining the metal barricades on either side of the Museum of Nature’s ornate entrance, waited happily on this unseasonably cold and windy June day to see Elizabeth II, daughter of King George VI, Her Royal Highness and Queen of the United Kingdom, Australia, New Zealand, Jamaica, Barbados, the Bahamas, Grenada, Papua New Guinea, the Solomon Islands, Tuvalu, Saint Lucia, Saint Vincent and the Grenadines, Belize, Antigua and Barbuda, Saint Kitts and Nevis, and Canada.

Shortly after noon, a band of bagpipers came down McLeod Street. Then, as if from thin air, appeared a group of dancers, young women in red skirts who proceeded to high step for the amusement of the assembled subjects. Her Majesty was due at precisely 12:25pm, but that came and passed without sight of her. Indeed, not until 12:30pm did the first of her 13-car motorcade, flanked by a couple dozen officers on motorcycles, appear from the west.

Her official vehicle—identifiable by the gold crown that passes as a license plate—came to a stop in front of the museum. The door opened and out stepped the Queen in baby blue—or robin’s egg blue, perhaps—and pearls, with an elaborate but tasteful chapeau. At the sight of her, the crowd whooped and applauded.

The Heritage Minister, James Moore, had been dispatched to greet her. He bowed slightly and then led her on the short walk to the museum door. She smiled widely and waved slightly to the crowd. As he neared the museum doors—two stone moose heads looming above—she put a hand up to make sure a gust hadn’t dislodged her hat. Mr. Moore appeared to attempt small talk. Her husband, the Duke of Edinburgh, and her entourage—which had somehow come to include John Baird—trailed behind as she went. Perhaps 45 seconds after she’d appeared, she disappeared inside and the crowd, now numbering perhaps 500, went back to waiting.

According to the one scribe assigned to follow her around the museum, Her Majesty took in a stuffed snowy owl, a stuffed wolverine, a large amethyst crystal from Thunder Bay, and various preserved plants collected by Sir Robert Parry in the Arctic in 1822. The Queen is reported to have looked “sternly” at the menacing wolverine, while the Duke “laughed and appeared quite taken with the animal.”

The Queen officially dedicated the new glass tower that rises up out of the ornately stoned Victoria Memorial Museum Building, then reviewed the display of a blue whale skeleton. She was finally serenaded by a teen choir.

As she toured the exhibits, the dancing girls were brought out again briefly to entertain the crowd. Meanwhile, a man in a double-breasted suit was preparing her subjects for her return. Various small children, most bearing flowers had been positioned along one of the barricades to the right. More than a dozen youngsters were then lined up in front of the barricades to the left, including a particularly winsome little man in a tiny suit. He looked to have been cast after several rounds of audition and was assigned the lead spot, the first to meet the Queen whenever she returned. Further down the line, another boy began to show signs of impatience. A police officer knelt down and he appeared mostly pacified after a brief conversation.

She emerged at just about five minutes past one to another roar from the assembled. She turned first to her left, the flower-bearing children beckoned to come forward with their gifts. The Queen collected her scented prizes, then walked across to the children on the right. When her hands were full with flowers, she would pass on the gifts to a woman in an elaborate hat who trailed her. Another woman in an elaborate hat trailed that woman, ready to carry what the first elaborately hatted woman could not. As Her Majesty made her way along the crowd—what’s apparently called a “walkabout” in regal circles—the young man in the suit, clutching a song book, began to sing God Save The Queen in a squeaky falsetto. She proceeded casually and graciously.

By 1:10pm she was back in her car and on her way again. All seemed entirely charmed by her existence.