The Commons: How do you solve a problem like Afghanistan? 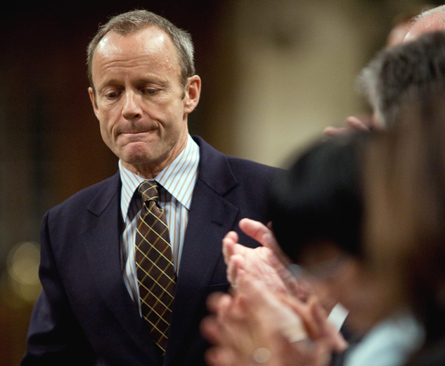 The Scene. Forced for the third consecutive day to defend his government’s position on the auto industry and perhaps tired of making the same attack on the leader of the opposition, Industry Minister Tony Clement decided today to go with the mid-90s pop culture reference.

“The honourable member talks about leadership. There is no leadership on the other side,” Clement said in response to Liberal Ruby Dhalla. “They actually remind me of that Seinfeld episode where the person knew how to take the car reservation, they just did not know what to do with the car reservation. On that side they aspire to the leadership, but if they ever got it, they would not know what to do with it. That is not leadership.”

This metaphor may or may not have been applicable. Reviewing the scene in question, it’s not clear who Jerry would be in this analogy. Possibly the Canadian people. Or perhaps the rental car is the Canadian people and Jerry is Tony Clement and Michael Ignatieff is Elaine and the rental car lady is the personification of Liberal arrogance. Or maybe it’s the other way round.

Anyway. Whatever the case, this quip did leave Dhalla a rather sizable opening she did fairly well not to miss.

“Mr. Speaker, this is not a Seinfeld episode,” she shot back. “This is a reality that Canadians are living day in and day out.”

The Liberals stood and yelled and cheered.

Otherwise the day was dominated by discussion of a place where democracy is taken far more seriously. Namely, Afghanistan.

The issue was a new law in that country that apparently infringes greatly upon the rights of Afghan women, to the point, observers argue, of legalizing rape.

Up first to question the government on the matter this day was Jack Layton. “Mr. Speaker,” he said, “yesterday, in response to a question from the New Democrat member for New Westminster-Coquitlam, the government said: ‘The onus is on the government of Afghanistan to live up to its responsibilities for human rights, including the rights of women. If there is any wavering on this point, this will create serious problems and be a serious disappointment for us.’

“Can the government tell us today how it is going to express the disappointment of the Canadian people with regard to these laws that attack women? Will it tell us what real consequences there are going to be for the government of Afghanistan and whether the mission and its purpose will be reconsidered in this context?”

For whatever reason, Stockwell Day, the Minister of International Trade, has recently been promoted to Minister Who Must Stand And Answer For This Mess. And so he did.

“Mr. Speaker, our Prime Minister has expressed serious concerns with this Afghanistan law. Our Minister of Foreign Affairs has done that also and continues to do that. The status of the law is still unclear, even among the Afghan legislators themselves,” he explained. “However, what is very clear is that we are concerned with the provisions in this law as we see them. We are calling unequivocally upon the government in Afghanistan to make sure it lives up to its international treaty obligations for human rights, especially human rights for women. We are very clear on this.”

Back came Layton. “Mr. Speaker, this law gives all rights to men on child care, divorce and inheritance. And allows rape. It is a very serious infringement of women’s rights in Afghanistan,” he said. “There are 116 of our soldiers who died for change in Afghanistan. How can the government say that our soldiers died to protect the rights of women when Hamid Karzai passed this law? If Afghanistan is moving forward with this legislation, the Government is prepared to reconsider its approach in Afghanistan, yes or no?”

Day reiterated the government’s “serious concerns,” warned of “serious implications” and called on the Afghan government to respect its obligations.

“What if they don’t?” chirped a Liberal.

The NDP sent up Dawn Black, the aforementioned member for New Westminster—Coquitlam. “Mr. Speaker, for years now, the government has ridiculed anyone in the House who dared to question what was going on in Afghanistan,” she began. “The government has said over and over again that the underpinning of this mission was to defend women’s rights and to provide education for girls. After all the sacrifices and all that Canadian families have put on the line, could this really end up being what we are fighting for in Afghanistan?”

She asked that the minister explain what “decisive action” his government would take.

Day decidedly would not.

The Conservatives stood to applaud this non sequitur.

After a few rounds of debating who was more egregious failing the Canadian manufacturing sector, the Liberals sent up Bob Rae to repeat Layton’s question. “Mr. Speaker, yesterday the Minister of International Trade said that there would be severe consequences if the government of Afghanistan continued with their plan regressive and reactionary about women in Afghanistan. I have a very specific question for the minister,” he said. “What are these consequences?”

Day went off on a tangent about recent violence in Kandahar, then expounded on his previously established clarity. “We also are taking a very strong line against any law in Afghanistan which in any way diminishes the rights of women,” he said. “We are asking for clarification. They are still in the process of clarifying that and our position is very clear.”

Back up came Rae. “Mr. Speaker, the minister talked about the very serious consequences. I asked him what the consequences are and he has not told us,” he observed.

A voice from the Conservative side mumbled something about hypothetical questions.

“The question is quite simple, what is Canada going to do to lead the coalition of those people who understand that the passage of these kinds of laws throws into question not only what has happened for Canada but for the Dutch, the French, the British, the 60 countries that signed the Afghanistan Compact, all those who sacrificed so much?” Rae continued. “What is the minister going to do about that? Where is the Canadian leadership?”

Day used the word “clear” three times in his response and said Canada would not take unilateral action. Though it’s unclear who was suggesting we do so.

Later, the same country, but a new issue. This raised by the NDP’s Paul Dewar. “Mr. Speaker, the government must come out unequivocally against torture,” he posited. “The Afghanistan Human Rights Independent Commission cites the use of torture—get this—by law enforcement agencies in every province of Afghanistan. Among the practices that it has reported are electric shocks, hot iron rods and the use of cable beatings. That is not what we are there fighting for. How can Canada be an accomplice to the use of torture by the police and the army, and will the government, in no uncertain terms, tell President Karzai that Canada will not support the use of torture?”

For whatever reason, Day was not made to stand and take this one. Instead, it was Peter MacKay who stood, talking in that serious way of his.

“Mr. Speaker, we on this side of the House certainly embrace the concept that the member has said,” he said. “We absolutely condone the use of torture.”

He went on for a few more sentences, apparently unaware of what he’d just said. When he sat back down, Vic Toews leaned over and appeared to inform the minister of the unfortunate word that had just escaped from his mouth. MacKay accepted Toews’ account and then caught the Speaker’s attention.

“Condemn,” he said by way of correction.