The Commons: ‘I’m sorry if there’s been any confusion’ 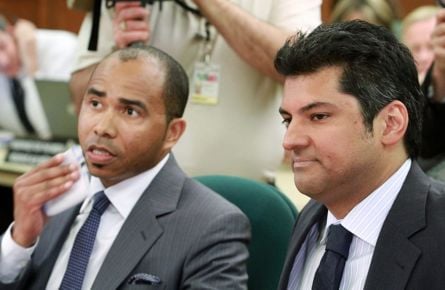 With the first opportunity in Question Period, Michael Ignatieff stood and demanded the Prime Minister apologize, on behalf of the government, for a Conservative backbencher’s press release that likened the nation’s police chiefs to cult leaders and accused them of corruption.

“Will he condemn these disgraceful remarks?” the Liberal leader wondered.

Stephen Harper would not. He would instead note that the backbencher had apologized, that the assistant who had put those words in the backbencher’s mouth had resigned and that, anyway, the real problem here was the Liberal leader’s position on the gun registry.

Mr. Ignatieff came back with an accusatory finger, demanding the Prime Minister answer the question. And so here came the Prime Minister, yelling and pointing and carrying on. “Of course we all agree with that apology,” he offered of his backbencher’s retraction, “and we accept that apology.” And then he again turned on the Liberal leader, upon whom said backbencher had wished metaphorical violence.

Bob Rae was up next and he introduced the day’s Liberal refrain. “Mr. Speaker, another example of the Conservative culture of deceit which has enveloped this House is the way in which the Minister of Justice comes into this House and tells the House that he is such a strong supporter of the work that is going on at the Military Police Complaints Commission at the same time as he says the people who are in that commission are making it very difficult for the commission to do its work,” he explained. “How does the minister explain this Conservative culture of deceit?”

The Justice Minister stood, acted besmirched, blamed the previous government and then beseeched the Liberal member to let the Military Police Complaints Commission do its work. Apparently, in the Minister’s version, the MPCC is somehow presently frustrated not by the government’s unwillingness to provide relevant documentation, but by Mr. Rae, whose words somehow hurt the commission’s feelings quite severely.

The Liberals continued to read from their culture of deceit chronicles, including bits about whatever remains of the access to information system, the complaints of the national ombudsman for the victims of crime and no less than four chapters on the affairs of Ms. Guergis and Mr. Jaffer. The best John Baird could offer in response to this last issue was to commend the Prime Minister for referring what he knew to the relevant authorities and to encourage the Liberal members to do likewise.

And so here, at the moment, lies Mr. Harper’s government.

One can only imagine how unimpressed Stephen Harper might’ve been as opposition leader to gaze upon such a scene.

And then Rahim Jaffer entered the room. Not the House of Commons, of course, but one of the grand committee rooms off Centre Block’s Hall of Honour, the grand walkway that connects Confederation Hall with the wondrous Library of Parliament. Specifically, Mr. Jaffer walked into the Reading Room, once the scene of the great fire that ultimately burned down nearly all of Parliament in 1916.

Mr. Jaffer arrived at 3:26pm and, after the cameras had acquired their prized pictures of him sitting at the committee table, proceeded to explain himself as a remarkable example of the Canadian Dream who had been brought low by an error of judgment and the howling jackals of the media and opposition. He apologized to his former colleagues, his family and his wife. He choked up a bit. He lamented that some members of the House of Commons had so lowered the bar as to come after him in this way.

The next hour and a half was spent trying to sort out what exactly it is Mr. Jaffer does for a living now—something to do with renewable energy and emerging markets and so forth—and how, if at all, he might have violated various statutes of government relations. Whatever was going on, he confessed, his company hadn’t yet made a cent.

There were some uncomfortable noises from the gallery when the NDP’s Pat Martin started talking about cocaine—Mr. Jaffer denied partaking of any illegal substance—but ultimately the afternoon turned on what Mr. Jaffer had or had not said on his personal website. Various members of the committee said he described himself in a particular way, Mr. Jaffer refuted their assertions. And it might’ve ended there if a Liberal operative hadn’t started handing around copies of the “biography” section of rahimjaffer.com. Thus did it seem to be proven that the committee members were correct and Mr. Jaffer was mistaken.

One such photocopy found its way into the hands of Conservative MP Chris Warkentin, a baby-faced 31-year-old backbencher from Grande Prairie, Alberta. And so it fell to Mr. Warkentin, a young man who can still reasonably look forward to the sort of political future that once seemed to be Mr. Jaffer’s, to deliver the unofficial verdict.

Sounding pained and exasperated, he reviewed how he had just moments earlier asked Mr. Jaffer some questions about that website and now he held in his hand a piece of paper that seemed to indicate Mr. Jaffer’s responses were inaccurate. And then Mr. Warkentin began to lament for it all, for good intentions gone wrong and everything else.

“This type of behaviour,” he said, “sullies all of our names.”

“I’m sorry if there’s been any confusion,” Mr. Jaffer offered.