The Commons: Just laugh it off

The sooner we begin quietly accepting the government's decisions, the easier it will be for everyone 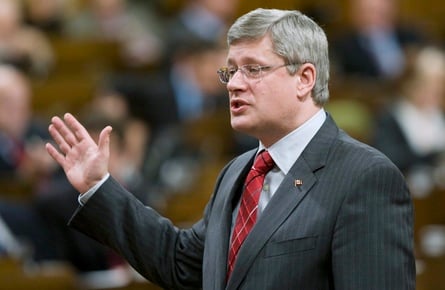 The Scene. Last week, the Foreign Affairs Minister called the Liberal foreign affairs critic to discuss the future of this country’s mission in Afghanistan. Yesterday, after an extension to that mission had been announced, the Prime Minister noted that “the decisions we have taken are very close to what the Liberal Party in fact recommended, so I am glad that we actually agree on this particular matter.”

And so it was today that the Prime Minister stood and identified the Liberals as enemies of the state. “The opposition is simply playing politics with the lives of Air Force members,” Mr. Harper cried this afternoon when Michael Ignatieff dared persist in asking him to justify the multi-billion-dollar purchase of new warplanes.

That the Prime Minister would, even indirectly, cooperate with anyone so treasonous as to show callous disregard for the lives of Canadian servicemen and women seems preposterous. Even that he would be comfortable finding himself in agreement with such scoundrels on something as important as the deployment of Canadian troops into a war zone seems beyond the realm of belief. So perhaps the Prime Minister is simply better than most of us at maintaining contradictory feelings for others. Perhaps he, possessing a generous understanding of others, believes that the Liberal side is capable of both making a responsible decision about the deployment of our military and being flippant about the lives of our soldiers. Perhaps there is no contradiction or disconnect between what this government did in one case and what Mr. Harper has said here.

Or perhaps the lesson here—the moral of this story, the message of this week, the theme of these last five years—is that it is counterproductive to place much more than passing importance on the words that come from the mouths of this government.

Perhaps the sooner we might accept this, the easier this time in Ottawa would be. For sure, the quicker we might get past any lingering reflex to note the pronouncements and promises of this Prime Minister, the sooner we can begin accepting his decisions as singular and unique moments, unrelated to anything past, present or future, to be quietly accepted and not questioned and only to be recalled at reelection time, and then only favourably. And the sooner we understand this, the quicker we might make peace with it all. Just look, for instance, at how satisfied and self-assured this government’s backbenchers seem most days, lounging about the House without a worldly worry. They must be doing something right.

And otherwise is perhaps to end up like Jack Layton, stammering and fidgeting and clinging to our naive ideas of how things should be.

It was the NDP leader who stood this afternoon and read aloud from the Conservative election platform of 2006, specifically the bit about how a Conservative government would make Parliament responsible for overseeing the deployment of the Canadian Forces abroad. Judging from the Prime Minister’s response, it would seem Mr. Harper has forgotten about ever committing as much.

Mr. Layton grew only angrier. “Mr. Speaker, the Prime Minister did what he promised he would never do, which is to use unelected senators to block the will of the House of Commons. He said he would never do that,” he cried.

Whether or not the Prime Minister had actually promised this exactly, he has certainly both lamented the unelected nature of senators and the periodic refusal of those unelected senators to do the House’s bidding. Either way, the NDP leader seemed to detect here a contradiction.

“Canadians are asking for action on climate change and we adopted a climate change accountability act right here last spring,” Mr. Layton continued. “‘Every prime minister has a moral obligation to respect the will of the House.’ That is what he said. So why did he order his senators in the other place to kill the climate change bill that was adopted by the majority of MPs in this House?”

Without an answer to this philosophical riddle, the Prime Minister merely yelled. “Mr. Speaker, Conservatives have been very consistent and very clear in their opposition to Bill C-311, a completely irresponsible bill,” he declared.

Now Mr. Layton was incensed, his mouth barely able to keep up with his fury. “Mr. Speaker, he has no right to use his unelected senator friends to kill the will of this House,” he yelled back. “He has lost his moral centre. He is fundamentally undemocratic.”

“Woahhh!” mocked the government side.

His displeasure now all encompassing it had exceeded the Speaker’s time limit.

Here the Prime Minister moved to finish with a flurry, mouthing perhaps the quintessential sentence of his premiership. “When we talk about democracy and the Leader of the NDP,” he said, “this is a man who after the election set out to form a coalition to overturn the results of that election so he could appoint members to the Senate.”

Across the way, seated in the fourth row at the far corner of the room, the NDP’s Paul Dewar stared over at the government side and, for a good ten seconds, simply shook his head—mystified, bewildered, defeated, depressed or grudgingly impressed.

Sometime later, Cheryl Gallant, a government backbencher, was sent up with a friendly question for her own side.

“Mr. Speaker,” she said, “Canadians have clearly shown a desire for reform of the Senate.”

The opposition members burst into laughter. They should remember that feeling of levity and learn from it.