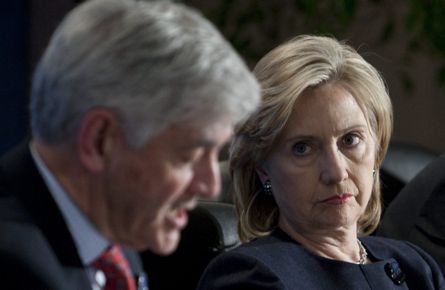 The Scene. As lovely as it is to be visited, it is always, at least for the conscientious host, a cause of some anxiety. Is the house clean enough? Is the fridge well-stocked? Are the guests sufficiently comfortable and entertained? Will they approve of our choice of wallpaper? And what, heavens, will they think of our approach to Arctic sovereignty and the war in Afghanistan?

“Mr. Speaker, last week, the Minister of Foreign Affairs told the House that there would be no request from the Americans to extend Canada’s mission in Afghanistan, but yesterday, Hillary Clinton came to town and blew the government’s cover,” Michael Ignatieff offered with his opportunity.

The Conservative side groaned.

Whatever was perfectly obvious to the Liberal leader was apparently quite confusing to the Prime Minister. “Mr. Speaker,” he sighed, “I really do not know what the leader of the opposition is talking about.”

Mr. Harper repeated his government’s commitment to withdraw soldiers from Afghanistan in 2011. Mr. Ignatieff, who would also like our soldiers returned by then, demanded the government commit to a full explaination what Canada will do after that. Mr. Harper stood and welcomed opposition input on this matter. Rarely have so many cross words been exchanged without any apparent disagreement.

Then though the Liberals sent up Larry Bagnell, the honourable member for Yukon, to rebuke the government for Ms. Clinton’s recent rebuking of the government’s snubbing of various other governments and leaders.

“Mr. Speaker, on February 17, Liberals warned the government to include Arctic aboriginal peoples in its Arctic summit. It ignored the warning and now Canada is being embarrassed by U.S. Secretary of State Hillary Clinton,” he both boasted and lamented. “Great Inuit leaders, such as former circumpolar ambassador Mary Simon and Nobel Peace Prize nominee Sheila Watt-Cloutier, have complained about this government’s lack of engagement with Canada’s Arctic peoples. Why has the Conservative government again embarrassed us on the world stage and left us in the bizarre position of Hillary Clinton having to defend Canada’s aboriginal people?”

The Liberal side stood to applaud this assertion.

The government turned here to Peter Kent, a man who has never seemed particularly interested in answering questions since departing a career that required asking them.

“Mr. Speaker, as I told this House yesterday, this meeting was called for those states that share a coastline on the Arctic Ocean,” he said, nervously rubbing his hands together. “The Arctic Council chair, Denmark’s foreign minister, will brief other members of the Arctic Council. The Minister of Foreign Affairs briefed Canada’s indigenous people before the meeting and will be talking to them afterwards.”

So there. All will eventually be briefed. It is only that the table reserved for this particular meeting came with only so many chairs.

“Mr. Speaker, I do not think the parliamentary secretary convinced Canada’s Inuit Athabascan and Gwich’in people with that answer. They also live on the coastline,” he huffed.

“The conference results get worse,” he continued. “Sweden, Finland and Iceland have all publicly rebuked this government about their exclusion, and the Norwegian foreign minister has been openly critical of what he implies is the Conservative cold war mentality.”

“Woah,” mocked the Liberal side.

“Why this disarray and embarrassment on the international stage?” Mr. Bagnell begged.

Over again to Mr. Kent, now even less interested in responding to this question as he was the previous query.

“Mr. Speaker, the opposition’s hand-wringing is completely unnecessary,” he said, speaking metaphorically where previously he himself had been acting literally.

He stumbled then, losing track of his place or not remembering what he was supposed to say here. The Liberals, sensing weakness, howled. “Cut to weather!” Dominic LeBlanc yelped in the former newscaster’s direction. The parliamentary secretary recovered enough to repeat himself and then returned to his seat.

Au revoir then, Ms. Clinton. At least half of this House shall miss you dearly and hopes you return soon.