Canada's Foreign Minister is no fool 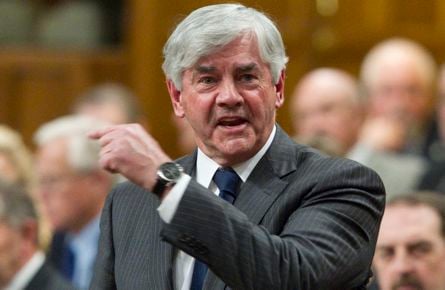 The Scene. From the vantage point of the press gallery, perched several feet over the Speaker’s right shoulder, it is impossible to see whether Ralph Goodale actually underlines the words he wishes to emphasize when he writes out his questions for QP, or whether he improvises on the spot as the mood strikes him. Lecturing the House in his particular way, an affected baritone rising up out of a broad-chested, square-shouldered man, he lands with a certain thud on just about every fifth word, drawing our various pronouns, adverbs and adjectives so as to be sure he has our attention. Here one hears a man who has spent some time thinking about how he will be heard.

His particular concern this day was the government’s late admission of negotiations with the United States toward reimagining the 49th parallel.

“We need to ask,” Mr. Goodale asked, “what is the Prime Minister prepared to bargain away? For example, with respect to the admissibility of visitors, immigrants and refugees, will Canada apply its own standards, which many Canadians believe are better than American standards, or will a Republican Tea Party congress make the rules?”

For sure, if we owe the Americans anything in these discussions, it is surely for the endless number of cartoonish villains they have supplied for the sake of our fear and ridicule these many years. For the sake of Michele Bachmann alone we should perhaps consider sending them Don Cherry and a few cartons of Cold-FX.

So challenged, Foreign Affairs Minister Lawrence Cannon was apparently compelled to acknowledge that for which the government had previously pleaded ignorance.

Two months ago, when details were first reported of dealings between the Canadian and American administration, Public Safety Minister Vic Toews demurred that he couldn’t possibly be expected to comment on “media speculation and hearsay.” The next day, Mr. Cannon dismissed it all as “mere rumours and speculation.” “Mr. Speaker,” Peter Kent pleaded a few days later, “I know my honourable colleague does not expect me to answer a question based on media speculation.”

A few days before the House departed for Christmas, the leader of the opposition took the matter directly to the Prime Minister. “Mr. Speaker,” Mr. Harper assured all within earshot, “there is no secret deal.”

And so it was that last Friday, Mr. Harper travelled to Washington to announce a declaration of intent to pursue a deal that, in being announced, could not be said, by definition, to be entirely secret. (See how that works?)

“Mr. Speaker, it was an excellent Friday,” Mr. Cannon now dutifully reported with all the gravity of a TV weatherman. “The Prime Minister and the president were able to sign a joint declaration in which we both acknowledged our own country’s sovereignty and we engaged, to be able to work together for both our economic prosperity, job creation, and at the same time making sure that we are capable of putting in place the tools that will thwart [terrorism.]”

Mr. Goodale, no fool, sensed that the Foreign Affairs Minister had not actually addressed the question posed. “Mr. Speaker,” he reported, “still no answer.”

Rather than simply restate the query, Mr. Goodale added two more to the queue. “On the question of privacy, what additional personal information will Canadians be required to disclose, and what are the guarantees against cases of abuse, like Maher Arar?” he wondered aloud. “Before surrendering Canadian borders, sovereignty and privacy, will the government bring full details of any proposed agreement before Parliament for debate and approval?”

No doubt expecting that the Liberal House leader would be typically insistent, the Foreign Affairs Minister’s aides had wisely supplied Mr. Cannon with more than enough happy talk for several interventions. “Mr. Speaker, we have indicated that the declaration that was signed by both the Prime Minister and the president is an excellent starting point for co-operation between both our governments,” he said, addressing directly the opposition side, or at least the television camera that hangs over the Liberal benches. “We are looking forward, in the weeks and months ahead, to be able to turn the corner and go forward, and be able to make sure that we do protect the jobs that we have, that we continue to increase our trade, our growth and indeed, as I mentioned before, protect our borders.”

Mr. Goodale was again not fooled. “Mr. Speaker,” he observed, “still no answer.”

Undaunted, the Liberal added no less than seven additional questions to the list. “Can the Prime Minister at least guarantee minimum gains for Canada? For example, will he get rid of U.S. country of origin labelling? Will there be no more Buy American policies? Will we get hassle-free access for durum, beef, pork and softwood? Will passport requirements be removed? Will Canada be exempt from the Patriot Act? What are the guarantees? Again I ask, will Parliament have the final say before any perimeter deal gets locked in?”

Lawrence Cannon, no fool, could see here the real issue at hand. And so, rather than acknowledge any of these question marks, he stood to underline the unspoken truth of everything before us.

“Mr. Speaker, we are all reminded of the very poor record that the previous government did have in terms of its relations with the American government,” he observed on everyone’s behalf. “I understand that it does hurt that the Prime Minister and the president of the United States get along and want to work together.”