The Commons: Let's not jump to conclusions, for once

The government pleads for patience on the Taseko file 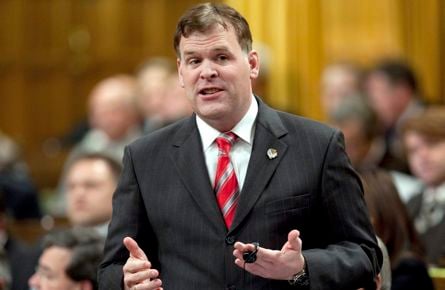 The Scene. However dark and dreary the capital can be in the late stages of November, there is Parliament Hill to warm the soul—the lights illuminating the Peace Tower, festive decorations lining Centre Block’s main hall, the impressive Christmas tree in the foyer and, of course, the flickering glow of alleged impropriety emanating from the House of Commons.

The bearer of good tidings this day was Mark Holland, he of the dramatic enunciation, youthful righteousness and nice taste in neckwear. “Mr. Speaker, two weeks before the government made public a decision to block Taseko’s bid for a controversial mine, shares in the company mysteriously crashed. In a matter of hours, 30 million shares traded hands, 10 times normal. At one point, investors dumped 2.7 million shares in 40 seconds, obliterating hundreds of millions of dollars in the blink of an eye,” he reported.

The scene thus set, the Liberal tabled his interpretation of events. “Someone somewhere in the Conservative government leaked,” he declared. “Insiders got wildly rich and investors got hammered. The government has known this for six weeks. Has it launched an investigation, called in the RCMP or done anything at all?”

Up came John Baird, well-armed with a confusing series of sentences.

“Mr. Speaker, here is what we do know,” he said. “A publicly available environmental assessment on this project stated quite clearly that it would cause irreparable harm to the environment. That document has been public for quite some time. People can speculate what they want. In fact, there was significant speculation that the government would approve the project, but we did not. We did the right thing for our environment.”

His chopped his hand assuredly on this last bit, perhaps to distract onlookers from the fact that he’d made no effort to address the question at hand.

Mr. Holland tried a second time. “Mr. Speaker, in one day, out of nowhere, with no news, the stock dropped 40%. That is no accident. This was a decision of the Conservative government, of its cabinet. When did the share prices into Taseko plunge? Around the same time the minister secretly met in cabinet to block the mine. While normal investors got wiped out, insiders leaked the information, shorted the stock and made millions,” he recounted. “What assurances do we have that Conservative insiders did not make out like bandits and why after six weeks has the RCMP not been called in?”

He audibly delighted in the word “insiders” each time.

Having failed to throw the Liberal terrier off the trail, Mr. Baird opted for admonishment. Shaking his head he deemed the member a peddler of “pure speculation.” “The member is making some pretty serious allegations,” he declared. “If he has any facts he would like to put on the table, he should table them in this place after Question Period.”

Mr. Holland was undaunted. “Mr. Speaker,” he said, “I just did table the facts and here they are again.” And indeed, he did then restate the story so far. “Has the government called in the security unit of PCO to investigate its cabinet?” he asked. “Has it done anything in the last six weeks, except to try to bury it and get away this leak?”

Having tried distraction and claimed besmirchment, Mr. Baird opted here for aspersion. “Mr. Speaker, the member opposite makes so many false allegations,” he lamented. “We know the member and that he has had to apologize for his reckless actions in the past.”

This seemed a reference to Mr. Holland’s recent apology, under threat of lawsuit, to a former member of Mr. Baird’s staff. But then this seemed on odd time for Mr. Baird to be casting doubt on another’s righteousness: this being a week after a member of a Conservative backbencher’s staff was fired for releasing confidential information to various lobbyists and this being just the sort of story that the Prime Minister and his fellow Conservatives used to take quite seriously.

Perhaps all would be wise to recall that cautionary tale of Ralph Goodale. For sure, if politics has a golden rule it is this: what goes around, comes around (over and over and over again).

Indeed, as the opposition persisted, Mr. Baird seemed to plead for decency.

“Mr. Speaker, the member opposite wants to engage in slander, smearing reputations and character assassination,” he admonished in regard to Liberal Marcel Proulx. “If he has any information, he should table it before Parliament.”

“Mr. Speaker, even for this member that question is quite regrettable,” he lamented after a typically demure performance from the NDP’s Pat Martin.

“Mr. Speaker, the member opposite is making outrageous allegations,” he sighed of Thomas Mulcair.

No doubt that one way or another someone is going to end up regretting this.