The Commons: Made for television 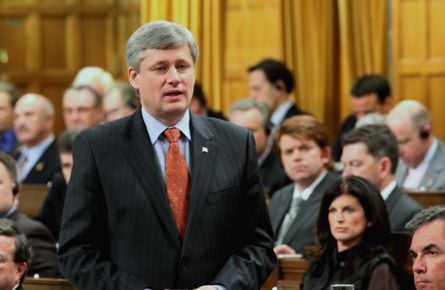 The Scene. The Prime Minister must surely appreciate Michael Ignatieff’s concern for the good reputation of this government.

“Mr. Speaker,” Mr. Ignatieff lamented this afternoon, “by letting the rumours swirl the cloud over the government continues.”

Indeed. Though it was quite sunny and warm here today, a metaphorical cloud has descended on the capital—a swirling mess that can now be said to include references to a private investigator, blackmail, drugs and compromising photos taken in strip clubs. All or none of which may ultimately be proved to have anything to do with anything.

Mr. Ignatieff attempted to put this in some kind of context.

“There is a pattern here. When Parliament gets in the Prime Minister’s way, he shuts it down. When MPs ask for documents, he blacks them all out. When ordinary citizens ask for access to information, he turns them down. When Parliament asks a simple question, why did he fire a minister, he will not even deign to answer,” he said. “There is a pattern of arrogance here.”

The government side laughed, as, well, an arrogant bunch might be expected to react.

“When will it stop?” the Liberal leader pleaded.

The Prime Minister stood to respond. Or at least to shrug.

“Mr. Speaker, as I have said, we received information which is obviously of serious concern. I have no direct knowledge to add to this information. The appropriate thing to do was turn that over to the authorities,” he explained. “The consistent pattern here is the government is doing the appropriate thing under the circumstances.”

Doing the appropriate thing. Under the circumstances. If that’s not already scheduled to be the government’s next campaign slogan, it probably should be.

The Liberals sicced Mark Holland, their barking bull terrier, on the government side.

“Mr. Speaker, when Rahim Jaffer met with some of his more questionable clients he said ‘I have access to a green fund.’ It was no idle boast,” Mr. Holland said. “The infrastructure minister delegated authority to review projects for the billion dollar green fund to his parliamentary secretary.”

“A parliamentary secretary who now confirms he did meet with Mr. Jaffer and his partner last June for government cash for three specific projects,” Mr. Holland continued.

“What are the details of these projects?” Mr. Holland finally asked. “Which of Mr. Jaffer’s clients were involved? Why were these unregistered lobbyists not reported to the lobbyist commissioner?”

Over then to John Baird to plead the government’s innocence.

“Mr. Speaker, the parliamentary secretary did have meetings with Mr. Jaffer and no funding was recommended to any of the projects that were discussed,” he said.

The Bloc proceeded with their part of the interrogation, Gilles Duceppe trying to deduce the nature of the mysterious allegations and Carole Freeman lamenting that the government’s lack of accounting has forced opposition members to rely on the media for information—a truly sorry statement on the state of affairs.

Finally then to Jack Layton, the NDP leader standing to make a necessary and long overdue reference to Tom Selleck’s television career.

“Mr. Speaker, the culture of secrecy of these Conservatives is reaching new heights. We have the commissioner of rights to information telling us that our system is in tatters. We had the Eyes Wide Shut approach on torture in Afghanistan, and so on. Now we learn that the Prime Minister referred a matter to the RCMP based on a report from Magnum, P.I.,” he charged.

“Why? What is the origin here? What we see today is the chief stonewaller refusing to tell us. Tell us what the private eye told him. At least give us a hint as to why the RCMP is involved.”

Alas, the Prime Minister was unwilling to play along.