The Commons: On with the show, this is it 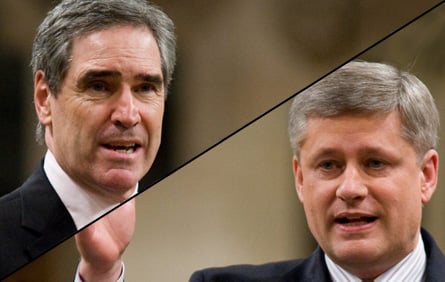 The Scene. Their eyes met across the crowded room. They exchanged nods and smiles and then Stephen Harper walked across the aisle to shake the hand of the newly confirmed Liberal leader. The two men stood and, holding hands for four or even five seconds, talked happily, likely avoiding the subject of each’s publicly stated contempt for the other.

Jack Layton, Gilles Duceppe and even John Baird followed suit, each congratulating Michael Ignatieff on his victory this weekend in Vancouver. Then the Speaker called a start to Question Period and Mr. Ignatieff stood to a rousing ovation from his caucus and chants of his given name.

“Mr. Speaker, employment insurance is not working in this country and there are some key issues that need to be fixed: access, benefit levels, maternity leave, fairness across regions and the status of the self-employed,” the Liberal leader reported, in the precise and straightforward manner for which he would like to be known. “Will the Prime Minister commit to launching an independent examination of these issues and present concrete proposals for reform before the House rises in June?”

Up came the Prime Minister to respond. “Mr. Speaker, as the leader of the Liberal Party should know, Canada has a very generous system of employment insurance that was, in fact, enhanced in the most recent economic action plan of this government,” he said. “I am perplexed by the sudden interest of the Liberal Party in NDP employment insurance policy. I guess the reason to borrow this is to create a diversion from the reaffirmation at the Liberal convention of the carbon tax. It is not any better an idea the second time around.”

Mr. Harper smiled to himself slightly as he finished, his disciples up quick to applaud as he sat.

So we now know how this will go. Not that it hadn’t already begun. But now that it is official, here certainly is the contest. The rules for disengagement.

“Mr. Speaker, the Prime Minister believes in magic thinking,” Ignatieff shot back. “He believes that if one repeats a falsehood constantly, it becomes true. It does not. It remains a falsehood.”

Up the Liberals jumped to cheer.

Smiling and gleeful the Conservatives stood to register their enthusiastic support.

It is tiresome to too often lament our politics. But the persistence of this particular game—Selectively Quote & Demonize—is surely of a special shame, one worth consideration.

For sure, politics is as much about words as actions. And words matter. And one should be held accountable for what one says. But surely this has nothing to do with that. This is a game of contextless words. Phrases like “raise taxes” hurled like epithets. Legitimate debate on debt management, government spending practice and taxation policy—boring!—avoided on account of it requiring too many words.

All of it an unserious exercise understood by everyone involved to be nothing more than spectacle.

“Mr. Speaker, for a prime minister who levied a punitive tax on income trusts, that is really something,” Michael Ignatieff responded with the start of his third question, seemingly at a bit of a loss. “Today, the Prime Minister can help thousands of unemployed who are not eligible for employment insurance at this time. Why not commit immediately to create a national eligibility threshold of 360 hours?”

“Mr. Speaker, this party asked the Liberal Party to give its suggestions for the Economic Action Plan in January,” Mr. Harper said in French. “We received no suggestions. Instead, we have improved the employment insurance benefits.”

Then, switching back to English, the Prime Minister moved to his conclusion.

“Let me just go back to this issue of the tax fairness package, which was a big net tax cut to Canadians, brought down business tax rates across the board and for the first time in history brought in income splitting for the pensioners of this country,” he said. “That party voted against it. This party voted for it because we believe in cutting taxes.”

His voice rose, his finger pointed this way and that, and, as soon as he was done, the government rose to applaud. If you’ve been paying any attention, you’ve surely seen it before. If you care to keep watching, you’ll surely see it dozens of times more.