The next GG is not a celebrity, nor would he seem to be at all ridiculous 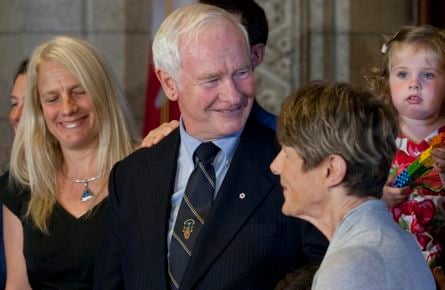 Shortly after the daily changing of the guard ceremony on Parliament Hill had finished, David Lloyd Johnston walked quickly to a podium in the Senate foyer, cleared his throat, and announced himself as the next governor general of Canada.

The grand wood doors behind him were open, the Senate chamber all lit up. His family gathered over his left shoulder—three young girls in matching summer dresses, one young boy in his best shorts. All around him, grand monarchs looked on from grand portraits—Elizabeth II, Victoria, Edward VII, Georges III, IV, V and VI. He spoke first in serviceable, if inelegant, French. He wore navy blue, his striped tie bearing the crest of the University of Waterloo. He seemed happy and not obviously daunted.

In the context of this stuff, Mr. Johnston is rather boring. He is not glamourous or striking. He does not represent a departure from convention. His selection was not a surprise twist (in fact, it had been rumoured for weeks). Whenever the moment of a new governor general approaches, the speculation is wild-eyed and in this case the speculative contenders—Preston Manning! Wayne Gretzky! William Shatner!—were decidedly more celebrated or, put another way, exceedingly more ridiculous.

Mr. Johnston is not a celebrity, nor would he seem, from his CV, to be at all ridiculous. The early reviews have been mostly positive, if, in some cases, unexcited. The worst anyone might be able to say at the moment is that he is, well, boring. And perhaps that the terms of reference he drew up two years ago for a federal inquiry were less than satisfactory. The latter may prove worthy of some debate—this is a man, mind you, who may well have to negotiate a political crisis or two before his time in Rideau Hall is through—but for now he is a man of impeccable schooling with a fine resume and an unassuming manner.

“My wife and I have always believed that service,” the designate said by way of introduction, “whether it is to family, community, university or country, is the highest calling. And so we are proud to have this opportunity to serve Canada and our fellow citizens.”

He spoke of “Canadians’ creativity and ingenuity,” not to mention “our diversity and our vitality.” He called out to our values, vowed to be our “stalwart defender,” and commended “the brave men and women of the Canadian Forces.”

He finished with a reference to Samuel de Champlain and a pledge of hard work over the next few months of preparation.

An attempt by one reporter to impose a question upon the Queen’s future representative was then politely shooed away. “Merci. Merci. Merci,” Mr. Johnston repeated until the scribe had taken the hint.

The designate then retreated a few steps to pose for a photo with his smiling, well-dressed family. One of the young girls, it must be said, seemed more interested in some Lego she’d brought along.