The Commons: 'The facts have not changed'

Court rules that the government must seek Omar Khadr's repatriation. Tories to consider an appeal. 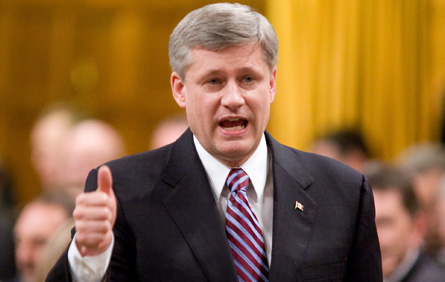 “Mr. Speaker, this was not a good morning for a Conservative government in abject denial,” the Liberal house leader reported. “A Federal Court judge has just ruled that the Prime Minister is legally obliged to immediately press the United States to return Omar Khadr to Canada.”

The Liberals applauded. The Conservatives grumbled.

“We have been telling the Conservatives to do so for years. The American process was deeply flawed. Now the courts have said so too,” Goodale continued. “Will the Prime Minister confirm that he will comply with today’s ruling of the Federal Court?”

The Prime Minister, listening impassively, took a sip from the glass of water on his desk. When the Liberal finished, he stood and spoke in his reasonable voice. “Mr. Speaker,” he said, “of course for years this government has been continuing exactly the same policy that the previous government had.”

In fairness, that the Prime Minister has been the Prime Minister for some three years is sometimes lost on him. Such is his regard for his predecessors that it often does not occur to him that he might contradict their negligence.

“The facts, in our judgment, have not changed,” the Prime Minister continued.

He did not clarify to which he facts he was referring. For sure, there are many realities that now seem beyond debate. Indeed, while Mr. Khadr guilt or innocence has yet to be decided, judgment of his treatment by the country Mr. Harper presently leads is now passed. “Canada had a duty to protect Mr. Khadr from being subjected to any torture or other cruel, inhuman or degrading treatment or punishment, from being unlawfully detained, and from being locked up for a duration exceeding the shortest appropriate period of time,” Justice O’Reilly wrote today. “In Mr. Khadr’s case, while Canada did make representations regarding his possible mistreatment, it also participated directly in conduct that failed to respect Mr. Khadr’s rights.”

And as the judge ruled of Mr. Harper’s government specifically: “The ongoing refusal of Canada to request Mr. Khadr’s repatriation to Canada offends a principle of fundamental justice and violates Mr. Khadr’s rights under s. 7 of the Charter.”

“We will be looking at the decision very carefully and obviously considering an appeal,” Mr. Harper finished.

With that, Goodale proceeded to concerns about the economic state of the country. By the third question, the Liberal house leader was talking fast and loud and Harper, who’d done so well to keep his hands folded in front of him at his waist for his first two answers, was yelling and pointing.

The government benches were wildly impressed. Standing to applaud, James Moore put a fist to his own chin to simulate the apparent beating Mr. Goodale had just endured. Sitting down, the Heritage Minister called loudly to the “punching bag from Wascana.”

After a couple more questions on our fiscal situation, discussions returned to less metaphorical abuse.

“Mr. Speaker, as I said, it is a federal policy that has long been the case,” the Prime Minister responded. “We will review the decision of the court and we will consider an appeal on that decision.”

Duceppe tried once more. “Mr. Speaker, Omar Khadr is a child soldier and the Canadian government has violated the Convention on the rights of children, by leaving him in a cell at Guantanamo for six years,” he noted. “Will the Prime Minister obey the order of the federal court and, if so, why wait so long?”

“Mr. Speaker, the Prime Minister has stated very clearly that we would obviously review the decision that was made,” he said, “and that we would seriously consider the possibility of appealing that decision.”

The discussion ended there, debate turning to matters of taxation and credit card fees, the day climaxing with a heated exchange between Conservatives and New Democrats as to whether or not the Canadian flag pins for sale in the Parliament Hill gift shop were, indeed, manufactured in China.