The Commons: The meaning of courage 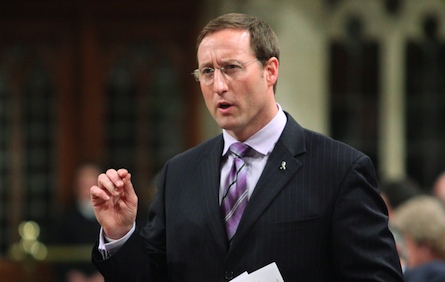 The Scene. Michael Ignatieff had barely so much as said the words “Mr. Jaffer” aloud then a great moan rose from the government side.

This first intervention was fairly perfunctory. And, in response, John Baird stood and said as little as possible. Not until his second query, stumbling a bit with whatever he had prepared, did Mr. Ignatieff arrive at a point—something that might be taken away from not just these past few weeks, but perhaps these past few years.

Mr. Baird stood here and jabbed his finger and punched the air and spoke emphatically about unrelated matters. Mr. Ignatieff tried again, this time en francais. For a third time Mr. Baird rose, this time to quite helpfully make the point the Liberal leader had been trying to make.

“Mr. Speaker, the Prime Minister, when serious allegations arose about a former member of his ministry, did the ethical thing,” the Transport Minister testified. “He did the right thing. He did not accept the information. He referred the entire matter to an independent authority so that they could make a determination of what to do with it. That showed a high ethical standard. The Prime Minister did the right thing.”

So here, finally, was everything the opposition has been asking for in response to the numerous allegations about Afghan detainees, proudly held up as the good and just response to another matter entirely. The day’s irony quota was thus met. But there were a full 40 minutes left on the clock and the day would not climax for another 20 with a rousing declaration of righteousness. Only then, after more questions about the matter of Ms. Guergis and Mr. Jaffer and after Jack Layton had loudly and pointedly suggested that the government’s support for the troops was insufficient to those veterans now reliant on food banks, did opposition members start hounding the Defence Minister.

First it was Claude Bachand, then Bob Rae. The Liberal critic asked his questions and then heckled from his seat. The minister responded, then sat and motioned with his hand to indicate he viewed Mr. Rae’s shouts as nothing more than so much chatter.

Then it was Ujjal Dosanjh’s turn. “Mr. Speaker, the facts are there for all to see. The evidence of detainee torture is mounting. We have Colvin, Anderson, Gosselin, Malgarai, the U.S. Department of State, our own human rights reports and the Afghan Human Rights Commission. The government makes the feeble defence that none of these allegations is true and if they are true nobody has told it,” the Liberal explained. “Whether the Conservatives have been guilty of continuing the torture of detainees by sending them to the NDS or the subcontracting of torture, that ought to be determined by a judicial inquiry. Why would the government not have the courage to call one?”

Mr. MacKay, not one to hesitate in the face of challenge, was up before Mr. Dosanjh had finished. “Mr. Speaker, the honourable member is doing exactly what he is accusing others of doing by accepting this evidence without taking it into account,” he declared. “He has listed a number of names. I can list all the names of the senior officials at the Department of Foreign Affairs. I could list all of the leadership of the Canadian Forces, all of whom have given a completely contrary view of the evidence of what was taking place around the allegations of Taliban prisoners. Those forums are there. We have the MPCC. We have the parliamentary committee. We now have Mr. Justice Iacobucci reviewing documents. The honourable member is on a different track for political reasons.”

Over to Mr. Dosanjh, now waving his arms and wagging his finger and stumbling over his words. “Mr. Speaker, nobody is asking the current government to accept any evidence. There are allegations and there are counter-allegations. It says these allegations are true. Others are saying other allegations are true. The fact is nobody can determine the truth, least of all that government,” he ventured. “We need a public inquiry. We need a judicial inquiry. We need the scrutiny of a sitting judge. The current government does not have the courage. It is a coward government. It does not want to face the facts. It should stand and be clear with Canadians and call a public inquiry.”

Once more to Mr. MacKay, the Minister rising to utter what surely must be three of the most profound sentences ever uttered in this place. “Mr. Speaker, we can talk about courage in this place. It is very easy from the safe sanctuary here in the House of Commons to judge this,” he demurred. “However, the courage that I am interested in is the courage of the Canadian Forces, the men and women on the ground in the Afghanistan at this very moment, fighting to protect our values both at home and abroad.”

From across the way, various Liberal backbenchers lodged their complaints. One seemed confused as to where one might find Mr. MacKay’s courage.