The Commons: The Prime Minister does not deign to explain

Stephen Harper will only commit to obeying the law 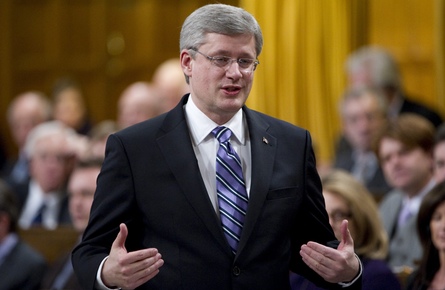 The Scene. Perhaps to his benefit, Michael Ignatieff sounded a bit hoarse, suffering it seems from a bit of a cold. It lent a bit of gravity to his words. In general, he sounds better when he sounds a little tired of this nonsense.

“Mr. Speaker, a perimeter security deal that has harmonization of entry and exit standards will confer on the U.S. government unprecedented amounts of information about Canadians. I do not think the Prime Minister is being straight with Canadians about this issue,” he ventured. “The deal would impose U.S. Homeland Security standards on this side of the border.”

He was, with this first try, flirting with presumptuousness. “Why,” he asked, “is the Prime Minister even contemplating the surrender of Canadian privacy rights to U.S. Homeland Security?”

This was easy enough to deny and so the Prime Minister went ahead and did just that. “Of course,” Mr. Harper declared, “no such thing is being contemplated.”

So what is being contemplated? Here the Prime Minister had two sentences—a total of 66 words that read as if scripted by at least as many communications specialists.

“President Obama and I have both stated that what we are working on will respect our respective laws while at the same time ensuring that we take action where necessary to reduce red tape, create jobs and create security in the interests of Canadians,” he explained. “That will sometimes mean pushing things away from the border, but obviously everything we do will be within Canadian law and practice.”

With his second opportunity, his tone turning towards frustration, Mr. Ignatieff attempted specifics. What biometric information, he wondered, would be turned over to American authorities?

“Obviously,” Mr. Harper responded, “we intend to comply with all laws of Canada.”

Mr. Ignatieff was now fully indignant, his eyebrows rising several inches up his forehead as his stood for his third and final query. “Mr. Speaker, I would assume the Prime Minister would respect Canadian law,” he sighed. “That is not the issue. The issue is how much private information the Canadian government will hand over to the Americans in the harmonization of entry and exit systems. It is a question to which an answer should be given.”

Mr. Ignatieff flirted here, again, with presumptuousness—his use of the term “should” at least suggesting that he could not reasonably expect an answer.

“Will we keep control over who gets into Canada in terms of our immigration and refugee policy,” he finally asked, “and will the Prime Minister bring this deal to Parliament before an agreement is signed?”

The mistake here, of course, was giving the Prime Minister a choice of questions.

“Mr. Speaker, of course we will maintain those things. That is Canada’s sovereign right,” Mr. Harper responded, taking the first part and ignoring the second.

“The reality is this,” Mr. Harper continued, rejecting Mr. Ignatieff’s reality and asserting his own. “Perhaps the Leader of the Opposition missed it. The anti-free trade bandwagon left the stage a long time ago.”