The Commons: There but for the grace of God go us

On the occasion of Chrétien's portrait unveiling, Harper uncovers a 'deep, enduring consensus' 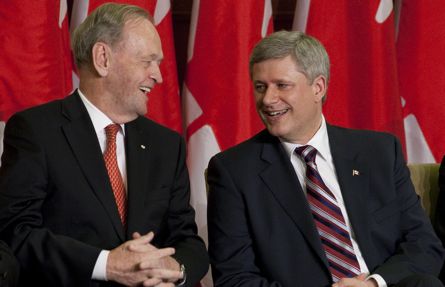 Stephen Harper stood this afternoon before a room of past and present cabinet ministers, current and former members of parliament, power-brokers, diplomats, hangers-on and swells—the size of the crowd woefully overwhelming Parliament’s air conditioning system on a truly sweltering day in the capital—and toasted the career of Jean Chrétien, the man who once seemed to epitomize everything Mr. Harper campaigned to change, everything that was wrong with this place, everything that brought Mr. Harper to office four and a half years ago.

Mr. Harper spoke of a “great Parliamentarian” and a “great leader” and his “long and successful service to Canada.” “For this passion and dedication, Jean Chrétien deserves our admiration and our thanks,” Mr. Harper said. “And he deserves to look back on his record of service to our country with pride and satisfaction.”

And then Mr. Harper said this. “Partisan differences are a healthy and necessary part of our political culture and process. But on an occasion such as this, we remember that they are transcended by a deep, enduring consensus, a shared understanding that our freedom rests also on the limitations imposed on those partisan differences by our constitutional traditions and the rule of law.”

Perhaps it was just the heat, but these words seemed heavy.

Some five and a half hours earlier, four television cameramen and one newspaper photographer stood in an airless, soulless committee room—the air conditioning not so much struggling here as simply non-existent—in the furthest corner of Parliament’s West Block, all lenses aimed at an empty green chair. The chair was to comfortably seat one Dimitri Soudas, the Prime Minister’s long-time aide and current director of communications, and the witness properly asked to attend and testify this day. He had, alas, already stated that he would not be present, and this was a cause of some controversy, and so the networks and the papers wanted a meaningful image for the evening news and the morning edition.

The standing committee on access to information, privacy and ethics is, at the moment, taken with a study of alleged government interference in the release of documentation under access to information laws—specifically the allegation that an aide to former public works minister Christian Paradis (Mr. Paradis is presently the Minister of Natural Resources) personally blocked the release of certain documents requested by the Canadian Press. The aide in question testified—somewhat awkwardly—before the committee three weeks ago. Mr. Soudas was himself due to testify two weeks ago, only to have his appearance preempted by a fire alarm.

Sometime between then and this past weekend, the government decided that it would no longer allow its staff to testify before parliamentary committees—the new policy announced, oddly enough, by Mr. Soudas after an appearance on a Sunday morning chat show. Never mind that Parliament is supreme, the ultimate forum of our democratic expression. Never mind that Parliament can legally compel an individual to appear before it. Never mind that Parliament even possesses the power to detain and, in fact, imprison those who defy such orders. Apparently the government would sooner its ministerial aides be thrown in jail than be allowed to answer questions under oath about how this administration conducts itself.

So there sat that empty chair. Behind it sat a half dozen reporters waiting to see what was about to occur. For awhile there was no action worthy of note. But then, at precisely 11:02am, in walked John Baird, the government’s Transport Minister and official face of obfuscation. Here, apparently, was the answer. Liberal Paul Szabo, the chair of the committee, strolled over to confer. Mr. Baird took his seat, a placard was made up to identify the witness and at 11:07am, Mr. Szabo called the committee to order.

Mr. Szabo informed the room that Mr. Soudas had called that morning to say he would not be attending. As well, the government House leader had, moments earlier, stood in the House and explained the government’s new policy, lamenting for the “tyranny of the opposition” and the brusque treatment of committee witnesses, and vowing that, from here on, only ministers will appear when there are questions about the help. Never mind the tenets of our democracy that allow Parliament to determine its own business, never mind the legalities, traditions and foundations of our democracy. This was, apparently, something to do with the concept of ministerial accountability. Except that, in this case, Mr. Soudas’ superior minister is the Prime Minister. And it being “quite unusual” for a Prime Minister to appear before a committee of Parliament—well, except for the time this Prime Minister broke from convention to do just that in 2006—the Prime Minister would not be here this morning. Instead, apparently, he had asked Mr. Baird to appear in his place.

The first objection was raised shortly thereafter this had been explained. Deeming this a “subversion of Canadians,” Wayne Easter took issue with the decision, apparently taken by Mr. Szabo, to let Mr. Baird testify. Mr. Szabo deemed this a challenge to his authority. Pierre Poilievre, Mr. Baird’s dutiful and faithful protege, first tried to argue it was not in fact an official challenge, then requested a vote to sustain Mr. Szabo’s original decision. That vote ended in a tie—the five Conservative members of the committee voting in favour of Mr. Szabo, the five opposition members voting against. There was then some debate over the precise meaning of a tie in this context.

There was more wrangling before Mr. Baird was allowed to proceed with an opening statement, which Mr. Szabo quickly cut short, apparently on account of its inflammatory nature. The rest was perhaps too pointless to recount here at any length. From the opposition side, this was said to be an insult to Parliament, a show of blatant disrespect and, potentially, the setting of a dangerous precedent, Parliament ceding control of itself to the government. From the government, there was weeping about the intimidation of ministerial staff, the offices of this government apparently populated entirely by wide-eyed innocents barely removed from the womb. There was moaning, there was raging. There was an attempt to adjourn, but Mr. Szabo voted with the government allowing the meeting to proceed. There was precisely one question asked of the witness—”Do you as a minister have any direct authority over Dimitri Soudas?” The answer seemed to be no.

Finally, at precisely 12:14pm, another attempt to adjourn was made. This time, Mr. Szabo voted with the opposition, bringing the meeting to an end.

This could easily be dismissed as arcane and tedious and complicated. It is perhaps all of these things. But is also quite simple. This is, as the Prime Minister put it, about the “deep, enduring consensus.” About the constitutional traditions and rule of law upon which our very freedom rests. Because this is, of course, a Prime Minister who, shortly after office, passed a law meant to end the practice of prime ministers calling elections on strategic whim and then, two years later, did precisely that. This is a Prime Minister whose government has schooled its members in how best to manipulate, frustrate and, if necessary, stymie committee proceedings. This is a Prime Minister who asked the Governor General to prorogue Parliament in December 2008 so that he might avoid a vote of non-confidence. This is a Prime Minister who, a year later, asked the Governor General to prorogue Parliament again, seemingly only because the business of functional democracy were getting to be a bother. And this is a Prime Minister who, two months ago, sent up the Justice Minister to argue, in an effort to withhold documents related to the treatment of Afghan detainees, that a limit existed to the will of the people as expressed by the individuals they elect to represent them, thus compelling the Speaker to stand and not only correct the Attorney General’s understanding of one of the most fundamental laws of this land, but also question the minister’s reading comprehension.

After Mr. Harper had finished speaking, Mr. Chrétien was invited to unveil his official portrait—the ceremonial reason for this afternoon’s gathering in Parliament’s Reading Room, scene of the great fire that burned Centre Block to the ground nearly a century ago. Mr. Chrétien then stood at the podium to reflect and revel and defend. He took aim at the easy cynicism that presently surrounds our politics and celebrated those who give themselves to the profession of public office. “This is a tough life,” he said. “But it is a very noble life.”

By way of example, he cited Argentina—a country that was regarded half a century ago, like Canada, as a nation full of potential. Canada, he said, had thrived. Argentina, he said, had struggled. The difference, he said, was democracy.

And so there, perhaps, but for the grace of God go us.