The Commons: These fleeting words 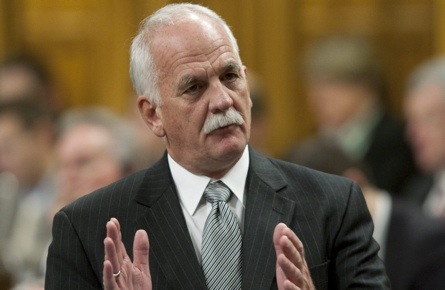 The Scene. This space has been used in the past to acknowledge the futility of placing anything more than passing significance on the pronouncements of this government’s ministers and mouthpieces. Their words are like daylilies, blooming only for 24 hours before fading into memory. To quibble, to seek to extend their meaning beyond nightfall, is to argue with the sun.

Perhaps then what follows here is relatively pointless. But then sometimes the rhetoric is so colourful, its aroma so intoxicating, that it is difficult to forget; near impossible, whatever one knows to be true, to admit to oneself that these are merely passing fancy.

So it is that we turn to the blooming words, uttered less than a week ago, of this nation’s Justice Minister and Attorney General.

“Mr. Speaker,” Rob Nicholson declared, under some attack from the other side, “no group of individuals has more respect for human rights in our country than the Conservative Party … There is no group of individuals over the course of Canadian history that has had a better record for standing up for human rights than the Conservative Party of Canada and its predecessors.”

These were strong words strongly delivered. Mr. Nicholson’s reading comprehension has been the subject of some lament, but his ability to stand and fulminate is unquestioned. His is a raring appearance of great conviction.

But here we are, less than a week later, struggling to reconcile that rhetoric.

We are so cornered by yesterday’s report of the Ontario ombudsman. In his words, the G20 summit, staged in Toronto and chaired by Prime Minister Stephen Harper, was the scene of “the most massive compromise of civil liberties in Canadian history.” However colourful those words, it can at least be said that the law invoked in that case was rather troublesome. And that, above and beyond the question of said law, those few days in Toronto, reputedly the scene of the largest mass arrest in this nation’s history, are now the subject of widespread and pointed concern.

Given the Attorney General’s words of last week, one might have thus expected a certain expression of concern to be offered by his party and the government it now forms. Whatever the jurisdictional niceties, one might have imagined that a group so concerned for human rights would be at least mildly ruffled at the thought of being associated with such an alleged breach.

It seems though that when Public Safety Minister Vic Toews was first presented with the matter today, his response was roughly the equivalent of a shrug. Indeed, when asked when he’d become aware of the rather troublesome law in question, he claimed not to have heard anything about it until after the summit’s conclusion. This despite the fact that the law’s existence was reported a full day before the G20 opened and that it is the Ontario ombudsman’s assertion, at point 180 of his report, that a federal government lawyer had, on the same day, been drafting appropriate responses to any potential questions about said law.

Setting that aside, some concession of even passing concern seemed in order. But by the time Question Period arrived, and by the time anyone got around to asking about it, the Minister remained relatively unmoved.

“Mr. Speaker, as I have said before, specific bodies exist to handle complaints regarding police conduct. It is appropriate for individuals, including the member, to direct her concerns to those bodies,” he read aloud from his script for the benefit of the Bloc’s Maria Mourani. “Our Conservative government has been up front about the real need and cost of security from the beginning, and we are very proud of the work that the police have done in the G8 and the G20. If there are any specific concerns about specific officers, there are specific bodies that could deal with that.”

Ms. Mourani pushed further, suggesting the RCMP might have some responsibility for the abuses of that weekend. Mr. Toews declared his support for the men in blue (“Mr. Speaker, I think it is reprehensible that the member would slander the reputation of each and every police officer who provided security at the G8 and the G20”) and then retreated behind the riot shields (“If there are specific officers who did something wrong, there are specific bodies that could handle those complaints”).

A short while later it was Olivia Chow’s turn to review the indictment. “Mr. Speaker, during the G20, innocent local residents were trapped by martial law. At the corner of Spadina and Queen, they were huddled in the pouring rain and humiliated for hours. Hundreds and hundreds of people were arrested and detained in horrifying conditions only to have their charges dropped,” the New Democrat reported. “The people of Toronto need to know what happened. How did it go so wrong? Why will the government not call a full public inquiry? Why are Conservatives afraid of the truth?”

Here Mr. Toews managed the neat trick of both welcoming and redirecting accountability. “In fact we are prepared to ensure that our streets are safe and to ensure that police act appropriately,” he declared. “Appropriate bodies exist. The member can refer the complaint there.”

Indeed, the Public Safety Minister was apparently quite torn. Presented by the NDP’s Don Davies with the fact that the summit was largely the federal government’s responsibility, Mr. Toews could not help but claim pride in the staging.

“Mr. Speaker,” he said, “as host nation of unprecedented, back-to-back G8 and G20 summits, we are proud of their success.”

But a sentence or two later, another redirection. “The member continues to smear all of the police officers who put their safety at risk during those summits,” Mr. Toews lamented. “If he has concerns about any specific officer or any conduct or any provincial law that was enacted in that respect, there are bodies to do that.”

The Stats. The environment, 13 questions. Government spending, the military and the G20, four questions each. Crime, three questions. Seniors, infrastructure and copyright, two questions each. Foreign affairs, Pearson airport and taxation, one question each.