The Commons: 'This is about victims'

No one disagrees about that 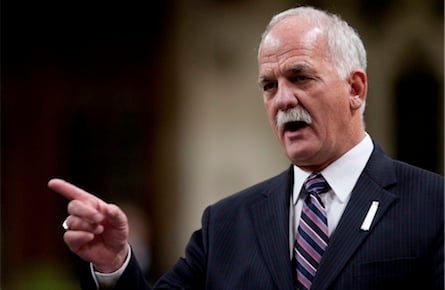 The Scene. After members of each party had risen to note the 21st anniversary of the murders at l’École Polytechnique, the leader of the opposition stood to add his acknowledgment and to wonder, on the occasion, why the government had once more delayed the implementation of regulations that would make it easier to track the movement of firearms.

In the Prime Minister’s absence, John Baird stood to offer the government’s response. “Mr. Speaker, I think all of us, in all political parties, each and every member of Parliament takes today to remember the tragic loss of some young women who had promising futures,” he said, quite solemnly. “That is something that I would not want to be political on.”

There was a groan from the opposition side at this.

This was not quite an answer to the question at hand, so Mr. Ignatieff tried again. When, he wondered, would the government learn from the massacre of 21 years ago and give the police what they required?

Mr. Baird responded here with pitch-perfect passive aggression: not at all a direct answer, but a series of sentences that leave just enough to interpretation as to neither reject anything nor commit the government to anything going forward.

Only after offering this did the House leader pronounce and denounce upon the Liberal side. “We also believe in putting violent offenders in prison for more time than the lax policies of the previous Liberal government,” he said, noticeably picking up steam. “That is why the Minister of Justice, that is why the Minister of Public Safety have brought forward a whole series of legislation to ensure that Canadians can be safer and we hope the Liberal Party will get on board and help us pass this legislation.”

All of which certainly sounds good. Though it would certainly sound even better if Mr. Baird’s government had some idea whether its policies toward putting offenders in prison for longer periods of time were either a) likely to deter crime or b) all that more severe than the previous sentencing standards.

Now safely removed from the hushed memorializing of moments earlier, the House found itself in the midst of another futile debate on crime and justice.

“Mr. Speaker, the government is not credible on the crime issue unless it is tough and maintains the gun registry,” Mr. Ignatieff shot back, prompting groans from the government side. “The government is now delaying measures that have been asked for by chiefs of police, by police associations for years to assist in the tracing of imported weapons. No one can understand why the government listens to the gun lobbying and does not listen to the police and the families of victims.”

This ended with a pronouncement of “shame” on both the Liberal leader and the Liberal party and then it was Liberal Raymonde Folco who stood to note that victims of crime, the RCMP and even the newly elected Conservative Julian Fantino had expressed support for the gun registry. “Will the Prime Minister,” she wondered, “listen to the families of victims and keep the gun registry?”

Over then to Vic Toews, the Minister of Public Safety, to mouth various platitudes. “Mr. Speaker, there has been no party in the House that has been stronger on the rights of victims and standing up for victims against violent criminals,” he objectively declared. “Our government is committed to making our communities safer. We continue to support gun control measures that assist law enforcement in protecting our communities and the safety and security of the public. I wish that the opposition, rather than standing up and constantly defending the rights of criminals, would actually stand up for victims.”

Here then was a logical conundrum of the first order: Ms. Folco’s question being in line with the position taken on behalf of victims by federal ombudsman for victims of crime Sue O’Sullivan, herself a former police officer. Not that one can reasonably expect logic to be applied on this matter.

“I agree, Mr. Speaker. This is about victims,” Mr. Toews concurred, before once more lamenting that the official opposition was not dutifully enough supportive of his government’s initiatives.

And so we are agreed about everything and nothing at all.

When Question Period was through, the Speaker called for all to stand to mark the national day of remembrance for violence against women. For a moment the House fell entirely silent. This was, no doubt, the most reasonable few seconds of the afternoon.