The Commons: Who is to blame for supporting the troops?

The government alternately congratulates, blames, and credits the Liberals for the F-35 program 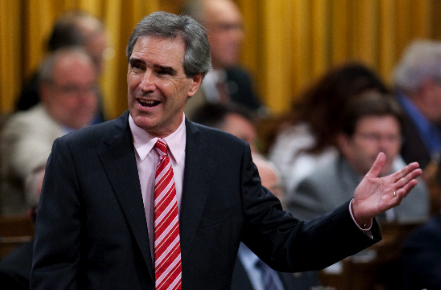 The Scene. “Canadian families are in debt,” Michael Ignatieff informed the House. “They are trying to save and they expect the government to do the same.” And in that regard, he explained, Canadian families are confused—befuddled by the billions their elected government has committed to fighter jets, international summitry and corporate tax cuts. How, Mr. Ignatieff wondered, could said government explain said expenses?

With the Prime Minister away, it was John Baird’s turn then to stand with the smile that now seems to be permanently affixed to his face and say the word “jobs” not once, not twice, but thrice. And with that quota filled, Mr. Baird turned then to the question of the warplanes.

“We do believe we also have an important responsibility to our men and women in uniform,” he asserted. “These planes that are being purchased will replace planes that will be more than 30 years old. These planes will last to 2040. That is why we are taking a different approach. We actually strongly support our men and women in uniform and want to equip them with the very best.”

So there. Support the troops, salute the flag, keep calm and carry on with nothing to fear but the surety that the opposition parties are, as we speak, conspiring to overthrow the government and burn this country to the ground.

Undaunted, but somewhat lacking in a snappy retort, Mr. Ignatieff stood to suggest that perhaps a competitive bidding process would only further ensure that our men and women in uniform were sufficiently equipped. Mr. Baird stood then to say the word “jobs” three more times and next to explain that, in fact, his government’s support for the troops was obligated by a previous Liberal government’s support for the troops.

“With respect to the decision about an open and transparent process,” Mr. Baird explained, “this is what one individual said: ‘The decision announced by the government is the culmination of the selection process undertaken between 1997 and 2001 by the Liberal government. That is when Canada signed up to join the F-35 program and invested $165 million.'”

These were apparently the words of a former Liberal cabinet minister.

This seemed like a fun game to play, so Liberal Geoff Regan stood to argue that, by the current government’s earlier reckoning, the previous Liberal government’s support for the troops did not necessarily obligate the current Conservative side to support the troops into the future.

“Mr. Speaker, the Prime Minister would like Canadians to believe that [a memorandum of understanding] compelled Canada to buy the F-35 stealth fighters, but in 2008, the then industry minister said: ‘This participation does not commit us to purchase the aircraft.’ Former senior defence official, Alan Williams, said: ‘Never did we promise to purchase the aircraft,'” Mr. Regan reported. “Why is the Prime Minister misleading Canadians?”

In response, Defence Minister Peter MacKay offered to be “perfectly clear.” In fact, he maintained, it was Liberal support for the troops in the past that compelled the Conservatives to support the troops. “Why was it okay for them now?” the early transcript records him as asking, somewhat mind-bendingly. “Why once again are we seeing a Liberal party back away from previous decisions and trying to shortchange the Canadian Forces?”

“It was in fact his government that started down this road,” the Defence Minister offered.

And it is a shame only that the road appears to have been built as a perfect circle.

The Stats. The economy and gun control, six questions each. Aboriginal affairs and infrastructure, four questions each. The census, three questions. The military, food safety, the environment, Afghanistan, veterans and agriculture, two questions each. Foreign ownership, border crossings and trade, one question each.