The Commons: Who loves ya, baby? - Macleans.ca 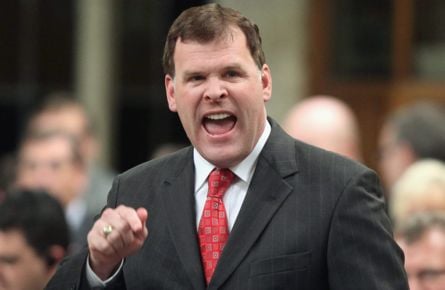 The Scene. As he made his first intervention, Michael Ignatieff insisted on staring down Stephen Harper’s empty chair. Perhaps it’s to the point now that the Liberal leader sees Mr. Harper’s dismissive mug wherever he looks. Perhaps he simply found the green felt of the House seats a soothing sight to gaze upon.

His question this day had to do with the potential sale of Potash Corporation of Saskatchewan Incorporated to BHP Billiton Limited and all of the national, economic and social implications within and around that transaction. “Mr. Speaker,” he said, “yesterday when the Prime Minister was asked about the possible sale of Potash Corp he basically shrugged his shoulders and said ‘Australia, America, who cares?'”

In full, the Prime Minister had said, “This is a proposal for an American-controlled company to be taken over by an Australian-controlled company.” Whether Mr. Harper was shrugging at the time, I do not remember. But given that he is given to shrugging reflexively at almost all propositions, it is certainly a distinct possibility.

“He does not get it,” Mr. Ignatieff ventured. “This would be the largest resource takeover in Canadian history and it would have huge implications if Canada were to lose control of a key natural resource. It would impact on headquarters location, impact on jobs and impact on provincial revenue.”

That said, a question. “When will the government stand up and say no to this deal with Potash Corp?”

John Baird, rising on behalf of the Prime Minister (and apparently the Industry Minister, seated directly beside Mr. Baird), refused to commit to any such time limit on a decision the government will no doubt not be interested in explaining even after it has been rendered.

“The Minister of Industry will continue to follow all of his obligations under the Canada Investment Act,” Mr. Baird informed the House. “We will only approve any takeover that is in the net best interest to Canada. That is something we take very seriously. This country can depend on the Prime Minister standing up and doing the right thing.”

The crudest response to Mr. Ignatieff’s questions in this regard was by now no doubt obvious, perhaps even inevitable. And though for a moment it seemed no one would dare say it, after a third and final question from the Liberal leader, Mr. Baird could apparently not contain himself.

The Conservative side loudly expressed its delight at this and, returned to his seat, Mr. Baird smirked with great self-satisfaction. Across the way, Mr. Ignatieff rolled his eyes. One could surely spend a great deal of time considering the relative offensiveness of the insinuation. But, as always, one must first debate to what extent it is worth taking seriously the words that are produced by members of this cabinet.

If it was cute lines that were the order of the day, the Liberals were lucky to have slotted Scott Brison second. “Does Canada not deserve better,” he said, turning to the government’s budget projections, “than a finance minister who cannot add and a Prime Minister who can only divide?”

This was an old bit from the Liberal side, but Ted Menzies was willing all the same to stand and pronounce himself insulted on behalf of the entire country. “Mr. Speaker, it is always sad when we hear the opposition cheering on someone talking down the Canadian economy,” he moaned.

This distinction between foreigners and Americans—especially after the insinuation that a Canadian who returns from the United States is somehow foreign—was perhaps an odd one. But here one should refer up a few paragraphs to the asterisk applied to cabinet ministers of this government.

“Mr. Speaker,” Mr. Layton shot back, “the largest percentage of stock, the majority of the board of directors and the resources themselves are Canadian.”

The NDP leader managed then to pronounce shame on both Liberals and Conservatives alike. Mr. Baird clung to the high road.

“This government will do that when it is required,” he said, “and I can say to my friends in the NDP that they can count on the Minister of Industry and its hard-working public servants to do the right thing for this great country.”

When the Liberals tried next to suggest—for the second day, this time even more regrettably than the first—some sexist disparity between the dispatching of Helena Guergis and the continued presence in cabinet of Christian Paradis, Mr. Baird barely even broke stride.

That this government has so passionately clutched the nation to its bosom, it is a wonder the nation has only ever been willing to return a third of its love in kind.