This is what happens when you do the "honest, ethical and transparent thing" 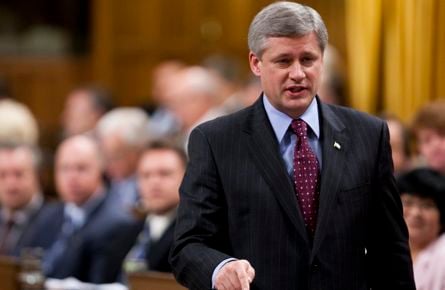 The Scene. Dominic LeBlanc stood and did as so many great rhetoricians have done before him. In this moment, he stood and sought solace in a complicated law that governs the professional behaviour of elected officials.

“Mr. Speaker, the Conflict of Interest Act specifically states that a public office holder is in a conflict of interest when he or she exercises an official power, duty or function that provides an opportunity to further the private interests of their friends,” Mr. LeBlanc stated.

And so the echoes were sufficiently stirred.

Funny thing about this Gaffer Affair, the longer it remains with us, the more substantive it becomes. What once was a simple tale of well-endowed prostitutes and illicit narcotics is now something to do with the Conflict of Interest Act, a 13-page code of conduct that is understood by perhaps one person in the capital. This is progress.

“Will the Prime Minister admit,” Mr. LeBlanc continued, “that his ministers contravened this Act when they granted privileged access to their friend, Rahim Jaffer, allowing him to waltz from one ministry to the next where they expedited his applications and they simply called him Rahim?”

“Get over it!” moaned a Conservative.

But still. What has happened to our manners? When did it become acceptable to refer to each other by given name? Whatever became of “good day, sir” and “good afternoon, m’lady?”

The Prime Minister stood with what passes for bemusement from him. “On the contrary, Mr. Speaker, the Liberal Party gets more and more ridiculous in the reaches it makes on this question,” he offered. “The fact of the matter of course is that Mr. Jaffer received no contracts from the government. The fact of the matter is that it has been ministers and the government who have revealed virtually all of the information that is available here because it has been turned over to the Lobbyist Commissioner.

“This government has acted absolutely correctly and quite frankly the Liberal Party can take some lessons.”

“The Minister of Transport, Infrastructure and Communities, Minister of Public Works and Government Services, Minister of the Environment and others shepherded government funding applications through privileged channels all for their buddy, Rahim Jaffer,” he ventured. “The question is simple. Why can the Prime Minister not admit that this is illegal?”

Conservative Gary Goodyear loudly inquired from across the way whether Mr. LeBlanc’s fishing license was up to date.

Alas, however simple the question, Mr. Harper was done humouring this line of inquiry. John Baird stood in his place—to a sad cry of disappointment from the Liberal side—and restated the government’s commitment to upholding the laws of lobbying and whatnot.

It was next Siobhan Coady’s turn, the promising Liberal rookie up to raise the matter of an even more obscure document. “In addition to the Conflict of Interest Act the Prime Minister’s own 2008 guide for ministers gives the rules by which members of cabinet must adhere, including ensuring the integrity of those with whom they are dealing. Ministers’ offices clearly flouted those rules when they conducted business with Mr. Jaffer,” she contended. “Given that compliance with the guidelines are a condition of appointment, will the Prime Minister explain the consequences for the members of cabinet, up to seven and counting, who were in violation of those rules?”

Over again to Mr. Baird who stood to pump his fist and assuredly mouth platitudes and scorn.

It was then Gilles Duceppe’s duty to wonder aloud about what, after all this, could be said to explain Helena Guergis’s resignation from cabinet. And it was then Mr. Harper’s obligation to stand and say what hadn’t led to her resignation—namely anything to do with government business.

Liberal David McGuinty stood and asked the government opposite to explain who had written the words “For Rahim” atop one of the documents now in question—a question the official opposition has asked, by a rough calculation, approximately 403 times already. For the 404th time, Mr. Baird stood and seemed not to notice.

To finish the Liberal prosecution, it was Mark Holland to pursue the Minister of Natural Resources and then wonder whether other members of cabinet might appear before committee hearings. And here Mr. Baird returned to a claim of righteousness.

“Mr. Speaker,” he offered, “we are only having this type of detailed discussion on the floor of the House of Commons with respect to these types of contacts because this government did the honest, ethical and transparent thing and made all these documents public.”

It was unclear to which mistake this voice referred.