The Commons: Would you let this man fly your plane? 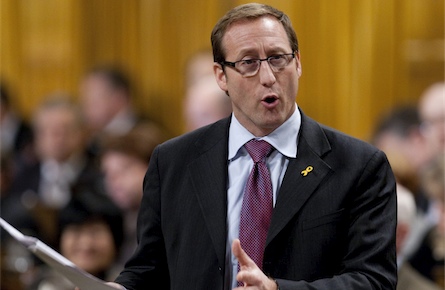 The Scene. So maybe here was a potentially telling anecdote for those who wish to better understand the mind of this Defence Minister, courtesy of course of Tony Clement’s tweets.

Last week Peter MacKay and Mr. Clement were dispatched to Texas, apparently for the purposes of the multi-billion-dollar purchase of new warplanes their government presently vows to pursue. As a result of Mr. Clement’s breathless dispatches, we know that at one point the ministers were invited to try out a flight simulator in Dallas. There, apparently, Mr. MacKay proved himself to be somewhat less than qualified to fly one of the planes he now desires. Later, “laughing maniacally,” he apparently decided to see if he could successfully fly underneath the Brooklyn Bridge.

What, if anything, to make of this?

The uptight amongst us might suggest this betrays a certain lack of seriousness. But rather perhaps it is that Mr. MacKay takes his job so seriously that he wouldn’t think of committing billions in public money toward new warplanes without testing himself whether one of the flying contraptions was capable of such a manoeuvre. Perhaps this amounts to due diligence.

Or perhaps—at the risk of psychoanalyzing a man on the basis of 140 characters—it speaks to a certain fearlessness in Mr. MacKay, an enduring faith in his own abilities and an unending bravery in the face of risk. This would, at the very least, explain the minister’s consistently undaunted appearance in Question Period.

It took Mr. MacKay a mere three sentences this afternoon to say something of a highly questionable nature.

“Mr. Speaker, of course, nothing could be further from the truth,” he claimed after the Michael Ignatieff suggested an open-bidding process for purchase of new jet fighters might be for the best. “There was a competition. In fact the competition took place under the tutelage of the party of the Leader of the Opposition.”

In one of a series of newspaper stories published these last few days, this particular claim was deemed a “total fabrication“—one seemingly at conflict with the minister’s own words. And that is apparently but one of a number of highly debatable claims the government side has made to explain its desire, in a time of supposed austerity, to spend billions of dollars on warplanes.

To the enduring benefit of Mr. MacKay’s ministerial career, his is not a presence that can be shaken by the mere existence of contrary claims and documentation. Indeed, here Mr. MacKay rose in typically patronizing form, so apparently sure of his version of events and so eager to display his disappointment in the other side. “In fact what we are seeing here is a win-win situation,” he enthused, “certainly a win for the Canadian Forces for the new state-of-the-art aircraft, the fifth generation aircraft, the only one available to our country. But of course for the Canadian aerospace industry the potential for contracts up to $12 billion and 150,000 jobs. This is great for the Canadian economy and I do not know why the Liberal leader opposes it.”

“Mr. Speaker, the defence minister’s credibility on this issue is in tatters,” Mr. Ignatieff shot back.

“Ohh!” the government side mocked.

“On May 27, he promised Parliament an open and competitive bid. On July 16, he reversed himself,” the Liberal leader continued. “He made one estimate for the maintenance costs of this airplane. It has now more than doubled. He has overplayed the industrial benefits, downplayed the cost. None of his numbers about this plane add up.”

Lesser men might have felt it necessary to address these complaints directly. Mr. MacKay astutely redirected the debate to the more appropriate question: Who here more lucratively supports the troops?

“Mr. Speaker, I do not know why it is every time push comes to shove, every time the issue is about getting the Canadian Forces new equipment to protect them, to promote their interests and Canada’s interests abroad, the Liberal Party is against it,” he lamented.

Mr. Ignatieff shook both his hands in Mr. MacKay’s direction, nearly pleading with the Defence Minister. “I defy the Minister of National Defence to tell the Canadian people what this plane will actually cost,” he begged. “No number the government presents on this issue is credible.” As if to taunt the leader of the opposition, the Defence Minister stood to assert the existence of a “contract” that commits Canada to buy 65 new warplanes at a cost of $9-billion.

“You’re making it up!” mocked Ralph Goodale from his frontbench seat. “You have no contract!” And indeed, by at least one report, it will be perhaps three more years before such a binding commitment exists.

On cue, here came Liberal industry critic to wonder if the Defence Minister was incompetent or merely misleading.

“Mr. Speaker,” demurred Mr. MacKay, “it is nice to see the member bring such a class act to the House prior to Christmas.”

“Mr. Speaker,” shot back Mr. Garneau, somewhat confusingly “from one class act to another.”

The Liberal backbencher was apparently only emboldened by the minister’s admonishment. “The minister of defence does not understand his job,” he declared. “He has also deliberately misled Canadians from the beginning.”

The government side howled for the Speaker to admonish the member. “Speaker?” pleaded John Baird, that paragon of virtuous rhetoric. “Speaker?”

Mr. Garneau proceeded to list a half-dozen matters insufficiently resolved, finishing with a flourish that was both generous and denunciatory. “Does the minister need some help on how to do procurement properly?” he cried. “I will give him a hand. So far, there has been nothing but monumental incompetence.”

Back up came Mr. MacKay, presented here with an individual certified to fly the space shuttle, but himself prepared with a very long preamble to a very small joke. “Mr. Speaker, if the member for Westmount—Ville-Marie, who is a former astronaut, a former member of the Canadian Forces, continues to belittle the local aerospace industries, if he continues to belittle the former colleagues he had in the Canadian Forces and the pressing equipment needs that they have, calling them generals’ toys, if he continues to do all of this, his constituents in Montreal and the local aerospace industry just might say, ‘Montreal, there is a problem.'”

A half dozen members of the government side stood to salute this punch line.