The complicated task of never forgetting

John Geddes on how Remembrance Day 2014 in Ottawa felt different in the wake of Oct. 22 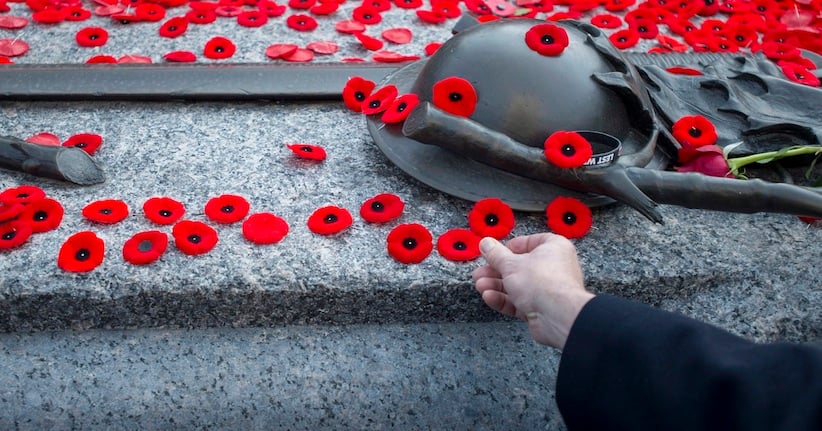 The ritual of Remembrance Day is all about resisting forgetfulness, about somehow remaining mindful that wars were fought, and troops died in them, far away, or long ago, or both.

But on this morning, at the National War Memorial in Ottawa, all the usual sights and sounds meant to serve memory felt just slightly superfluous. The final note of The Last Post hung in the air, as it always must. The soldiers, from old vets to young cadets, looked splendid, as they always do. Beneath everything familiar, however, there was the ache of the barely scarred-over wound left by Cpl. Nathan Cirillo’s death, only 21 days ago, in this very place.

If there was no danger of Cirillo’s murder being forgotten so soon, Remembrance Day offered a chance to ponder how we should relate a senseless attack—against a young soldier doing ceremonial guard duty at the country’s most sanctified place of remembrance—with the sacrifices of generations of troops sent to fight abroad.

The mission Canadian troops took on in Afghanistan from 2002 to 2011 blurred the line between confronting terrorism and fighting a war. And throughout that era, the Nov. 11 crowds around the memorial in Confederation Square steadily swelled. In fact, they were growing even before that, going back to the marking of the 50th anniversary of the end of the Second World War in 1995.

Cirillo’s death brought out thousands more today, filling the Ottawa streets that feed into the square, and the slope of Parliament’s East Block, which overlooks it. The turnout may have been the biggest since the memorial—that moving bronze assemblage of First World War soldiers struggling through an archway—was dedicated in 1939.

Related post: Bearing Witness: The story of the Ottawa shooting — as told by those who were there.

Among those who arrived hours early, to stake out a good viewing spot, was Glenn Allen, 65, of Gatineau, Que., who told me he last attended the ceremony here in 1964. That year his late father, who flew as a co-pilot in Canadian bombers over Sicily and North Africa in the Second World War, was among the veterans being specially honoured.

I asked Allen how he felt about his father’s war experience now being tied together, by the tragedy of Cirillo’s death, with our contemporary fears about terrorism. His response caught me off guard: Allen said his fiancée was the lone Canadian among 26 people killed in 1972 at an airport in Tel Aviv by the Japanese Red Army, a terrorist organization then supporting Palestinian groups. He was by her side when they shot her; they were a couple of University of British Columbia students on an adventure.

Allen struck me as a naturally upbeat guy, but his advice to Canadian politicians, not surprisingly given his personal story, is to take even seemingly remote terrorist threats very seriously indeed. “When ISIS threatens Canada by name,” he said, “believe them.”

Tom Cox, 59, was another who arrived early and alone. Cox served in the army as a mechanic from 1974 to 2000, including stints in Bosnia and Kosovo in the 1990s, during the messy conflicts there when the old Yugoslavia was disintegrating. He contrasted Cirillo’s murder with the deaths of soldiers deployed to combat zones: “You expect it when you’re away at war; you don’t expect it in Canada.”

Cox now works at an office job in Edmonton, and moved a planned business trip to Ottawa up by a day in order to be in the capital on Nov. 11. He had never before attended the National War Memorial service. But he recalled Remembrance Days elsewhere—back before the Afghan mission restored the military’s place in our imagination—when he would see few civilians at the cenotaphs.

Times have changed. More Canadians than ever strive to remember, at least once a year, to be grateful. Beyond that, this task of never forgetting is more complicated. After all, those of us lucky enough not to have experienced war can’t share a combat veteran’s memories.

Even in wartime, it must be this way. In Alan Cumyn’s novel The Sojourn, a young Canadian fighting in the First World War, back in London for a respite from the front, meets an older man on the street, who asks if the sojourning soldier happened to have been at Gallipoli. “ ‘My son was at Gallipoli,’ he says. He looks down at his shoes for a moment, as if unable to speak.”

That fictional father’s yearning to connect with someone who possesses real memory of what his son experienced seems to me to bring us close to a more common feeling of falling short. We’re told we should remember, but at a deeper level, of course, we can’t. We weren’t there. We can only look down at our shoes. And show up on Remembrance Day.

This morning, by the time the formal part of the program got going, I had drifted far back in the throng. From my vantage point, we couldn’t see much other than the tops of the tall bearskin hats of the Governor General’s Foot Guards, and the tips of the flags carried at the front of the veterans’ parade.

Around me, though, nobody seemed to mind being unable to catch even a glimpse of dignitaries like the Prime Minister and Princess Anne laying wreaths. The bagpipes reached us, and the recitation over the loudspeakers —“They shall not grow old …” — and we could gaze across the square at the green-bronze angel, atop the memorial, against the blue sky.

That was a sight, serenely aloof from recent news. But after the ceremony ended, quite a few in the crowd waited for their chance to move in closer, right up under the angel, and place their poppies on the Tomb of the Unknown Soldier, a gesture that’s taken hold in recent years.

A good many stood there for a long time afterward. It was beside the tomb that Nathan Cirillo was standing when he was killed on Oct. 22. We’ll be reminding each other of that for many Remembrance Days to come.