Who 'won' the second French debate of the Tories' leadership race? It's immaterial. The real campaign is about to begin. 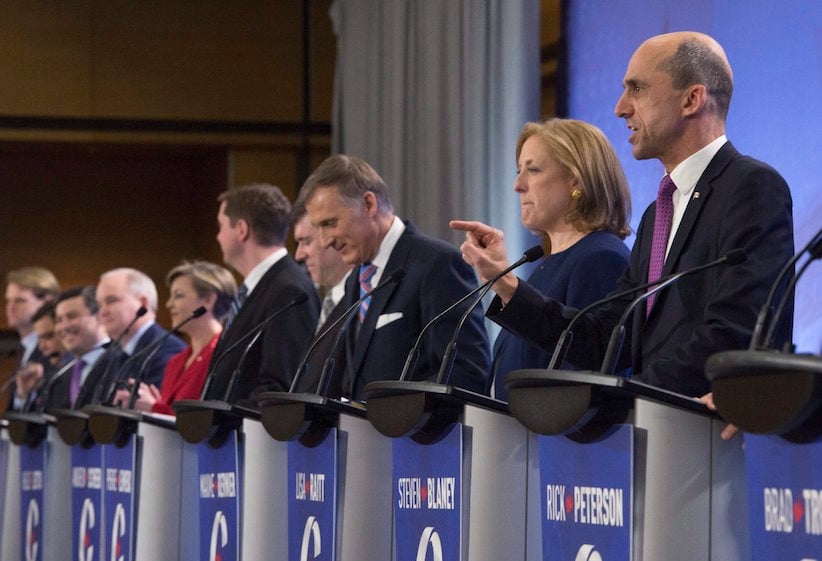 First, let’s address the very English elephant in the room. Much like the first effort in Moncton just over a month ago, the second French debate in the Conservative leadership race was hamstrung by sheer numbers and too few tongues properly acclimatized to Canada’s French fact. The end result was akin to watching a terrifically awkward version of The Dating Game, in which each of the 13 candidates were courting a crowd of mostly white, mostly old people. Many spoke warbly French, or read off cue cards. One in particular, Deepak Obhrai, was straight up incomprehensible.

The likely frontrunner in the race, Kevin O’Leary—expected to announce shortly—timed his candidacy precisely to avoid this embarrassment. Say what you will about the Liberals, but at least the party is aware of the importance of bilingual leadership candidates. Lisa Raitt, to take one example, has been in government for nearly 10 years, and has had leadership pretensions for at least half that. Tonight, she read everything from her lectern.

MORE: Patriquin on why the PM needs to be bilingual

That’s the cynic’s view, and it will reverberate throughout Quebec’s cloistered media sphere for exactly one news cycle before being forgotten entirely. Quebecers are used to English politicians earnestly butchering their language whenever they come looking for votes, and to many of them, tonight was an extended exercise of this.

But there were bright spots, linguistically speaking. Many of them, actually. Chris Alexander was as close to flawless as he needs to be in French. His impassioned response to a question about First Nations, though boilerplate—housing, education, culture—was as close to a quotable campaign moment we’ve yet seen.

If the rule of thumb for an English politician when it comes to speaking French is to be good enough to be understood but bad enough to be pitied, then Andrew Scheer, Erin O’Toole and Michael Chong could be the next prime minister. Former MP Andrew Saxton and venture capitalist Rick Peterson, the two darkest horses on that podium, could almost pass for properly bilingual English Quebecers.

There’s also something refreshing of having each candidate stripped down to their talking points, in the interests of limiting the embarrassment. Someone, probably her campaign manager Nick Kouvalis, had sicced Kellie Leitch on Maxime Bernier, because she spent most of her time attacking him. “Maxime Bernier is an impostor and a liar,” she said, clearly reading the insult off a cue card. Brad Trost said he would eliminate immigration from “pro-Islamic, radical” countries, which sounds dumb and hateful in either language. In championing inclusion and immigration, Michael Chong got about as much support in Quebec City as he would in rural Saskatchewan. That is to say: crickets.

Then there’s Steven Blaney. The former public security minister and native son of Quebec was the favourite of the crowd. He drew applause for just about everything he said, from dismantling Native reserves to playing up his pro-supply-management credentials in a room stacked with farmers. He promised to banish the niqab from the heads of public servants. He made a Kardashian joke.

In short, he probably won tonight’s debate. Yet tomorrow, he and the other 12 souls running to lead the Conservative Party of Canada will be sitting squarely in Kevin O’Leary’s shadow all the same. That’s how little tonight mattered.