A discussion on policy this was not. What was clear in the first debate was that for any of the four candidates to shine, they will need to debate in English. 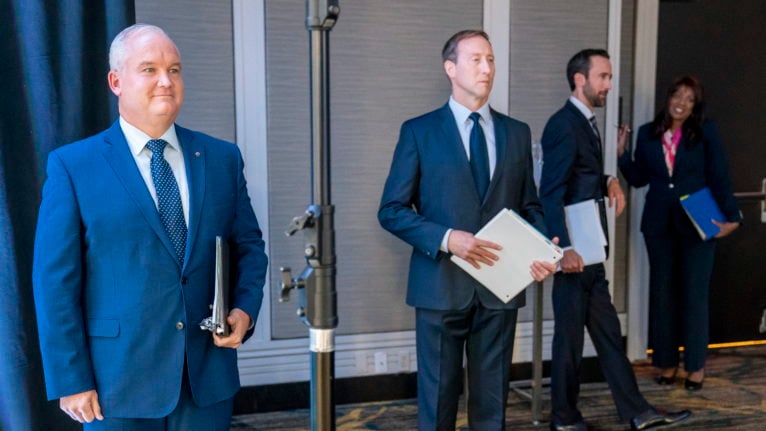 Leadership candidates O'Toole, MacKay, Sloan and Lewis wait for the start of the French leadership debate in Toronto on June 17, 2020 (Frank Gunn/CP)

Mon dieu. Anyone who tuned in to Wednesday’s Conservative Party leadership debate expecting to see a serious policy debate will have come away disappointed.

Although bilingualism is important to a majority of Canadian voters, that is not often the expectation of a French-language debate chez the Tories. So if we can assume, rather, that the main point of putting Conservative Party leadership candidates on a stage to present their ideas en français was to figure out whose language ability was the most proficient, then the results are in.

Congratulations to Dan Nowlan, the moderator of the debate and a co-chair of the party’s leadership election organizing committee. His patient listening and nimble pronunciation stole the show.

Perceived frontrunners Peter MacKay and Erin O’Toole were clearly more comfortable with the language than their opponents, although neither could be accused of perfect fluency.

MacKay’s ability, in particular, has noticeably improved. This gave him the confidence to jump in first on most of the four-on-four debates, and to inject some personality into his responses—deflecting many of O’Toole’s interjections with a sort of laughing smugness reminiscent of another party leader.

Leslyn Lewis and Derek Sloan each had the courage to stand up on the debate stage knowing that tonight would be an absolute labour. Both read closely from their notes and struggled to ad lib or look at the camera. To be in the room must have been to physically experience the waves of relief emanating from their podiums at the conclusion of one-on-one segments.

And to give credit to O’Toole and MacKay, neither of them took too-easy jabs at Lewis or Sloan’s French. Instead they saved up all their animosity, and a majority of the debate time, for attacks on each other.

One might have figured that the very first “debate” in the Conservative Party’s leadership race would be an opportunity for, I don’t know, discussion about policy?

Each candidate was able to present their views, with varying degrees of success, in response to questions from party members.

Some of the Coles Notes shone through: it was clear that Sloan and Lewis were more socially-conservative; it was clear that MacKay intends to lean heavily on his roster of endorsements; it was clear O’Toole plans to lean on the fact that, unlike MacKay, he has a seat in the House of Commons. As could be expected from a forum of Conservatives, there were the requisite messages of support for the oil and gas industry and for supply management.

But when it came to the “discussion” between candidates, an elevated discourse this was not. During segments open to all four candidates, MacKay and O’Toole, albeit with reasonable language ability, rarely managed to see beyond each other’s faults. Each devoted considerable energy to accusing the other of lying or flip-flopping, which only served to make them seem alike.

Although language ability won’t be an excuse, it was likewise hard to tell if they had really been paying attention to each other. MacKay jabbed at O’Toole several times, late in the debate, on whether or not he was pro-choice. Perhaps recognizing how important that would be for Quebecers to hear, O’Toole had mentioned a woman’s right to choose in his first answer, to a question about … defence procurement.

Between the repetitions of “you attacked me (or my plan)” and “I have a question for you,” it was easy to get lost. And good luck to the viewer that was not coming into the experience with a thorough background knowledge of the Twitter disputes between the two candidates.

More because of their French than because they weren’t able to get a word in, Lewis and Sloan contributed to the free-for-all debates only with occasional questions for MacKay or O’Toole, sometimes prompted by an even-tempered Nowlan.

Still, Wednesday evening’s efforts were not unimportant. Having at least some grasp of French is a priority to voters. A Leger poll in January found 52 per cent of respondents overall, based on a web survey of 1,554 Canadians, cared that the next Conservative leader be “perfectly bilingual.” For self-identified Conservative voters, it only mattered to 44 per cent. But for Quebecers, the number was 85 per cent.

And that should matter to these candidates not just because they may one day hope to become prime minister, but because their ability to become Conservative leader will be heavily affected by how Quebec’s Tories choose to vote. Each of Canada’s 338 ridings, including 78 in Quebec, is weighted equally.

Candidates shouldn’t blame Quebecers, though, for needing another performance from them to figure out what to think.