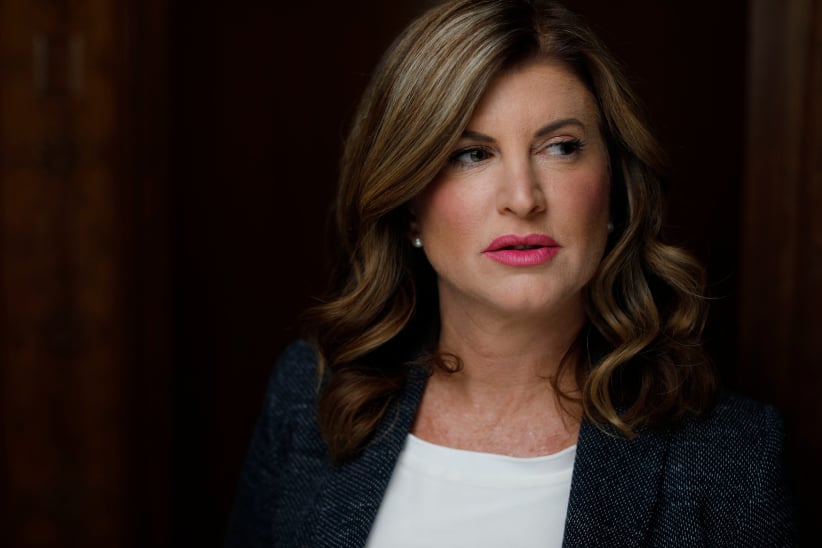 A couple of Rona Ambrose’s staff members emerge from the inner office of the Leader of the Opposition’s suite in Centre Block, fanning themselves and complaining it’s “like a sauna.” A few minutes later, a window has been propped open—with a scrap of wood, because the century-old panel won’t stay up on its own—to admit a breath of Ottawa-in-February air. Ambrose herself, though, looks unruffled, as she perpetually does: friendly, at ease, unfailingly poised.

It’s that smooth-as-glass quality that has made Ambrose, 47, the obvious choice in Conservative circles to fill the role of interim leader at a time of profound change within the party and in the broader Canadian political landscape. It also, of course, stands in stark contrast to the extremes of personality, decorum and policy proposals on display as more than a dozen leadership candidates publicly scrap their way through the party’s divisive, wide-open leadership race.

Certain factions have tried desperately to recruit her into the race, believing she is the best chance to compete with Prime Minister Justin Trudeau on his own terms at the polls in 2019—and Ambrose would almost certainly be a frontrunner if she were among the candidates. But party rules prohibit an interim leader from running. It means she made two decisions at once when she took on the job: to lead now for a limited time, and not later.

In a town and political ecosystem where most people stay until it’s clear they’ve worn out their welcome—and even then, many cling to the side of the bus a good while longer—that’s an intriguing choice.

As Ambrose settles into a chair near the open window in her office, it’s three days after the shooting that left six people dead in a Quebec City mosque. Two days earlier, she and each of the other party leaders had risen in a House of Commons hushed with sadness and solidarity to condemn the tragedy and what it stood for.

RELATED: A moment of silence and solidarity in the House

On the floor of the House, she says you can feel the collective mood of the place as clearly as if you were reading the emotions of a person standing next to you in a room. “You can definitely feel the energy, and on Monday, it was a very solemn day,” she says.

What followed the shooting was a wave of public condemnation of a hostile and hateful climate that may have contributed to a Quebec man—apparently inspired by hard-right politicians—opening fire in a place of worship. Blame was assigned most prominently to several Quebec politicians accused of pushing anti-immigrant views, as well as at the feet of U.S. President Donald Trump, whose Muslim travel ban took effect the same weekend as the killings, and Tory leadership hopeful Kellie Leitch, who gobbled up much of the oxygen in the early race with her deliberately provocative insistence that immigrants should be screened for “Canadian values.”

Asked about a broader climate of intolerance that may be taking hold, Ambrose says she just doesn’t see it in Canada. “I don’t sense that we have that problem in this country,” she says. “I don’t think Canadians want that, is what I mean. I see Canadians as much more open, optimistic; we have a great country, we have room for people.”

That sounds like she views Leitch’s rhetoric as damaging and unwelcome, but Ambrose demurs. “Look, for myself, as the interim leader, it’s really important to me that I stay neutral,” she says. “One of the advantages in having our first leadership race in 10 years is that every Canadian, whether they’re a party member or not, can weigh in.”

Asked if it’s difficult to stay neutral, given that she must care a great deal about the party and its future direction, Ambrose says no. “People are going to have different ideas, some of them controversial,” she says. “This is part of a race: trying to get attention, trying to create a buzz around yourself.”

Last May at the Conservative convention in Vancouver, a “Draft Rona” movement sprang up among a subset of Tory MPs who campaigned to change the rules around leadership eligibility. “There is such a strong expression in the party how unfortunate it is she cannot run for the permanent leadership, she is who is the most likely person to bring us to victory in the next election,” MP Scott Reid said at the time. Ambrose swatted away the idea and the motion failed by a wide margin.

She says that for her, the interim leadership was not a placeholder position, but a chance to take charge of the party at a time of pivotal change. Not only did Stephen Harper, who built the party and led it through nearly a decade of governing, step down after the 2015 election humbling, but the Tories have also weathered the recent departure of other prominent figures such as James Moore, Peter MacKay, John Baird and Jason Kenney. “My sense was this was probably the most important time for our party,” Ambrose says. “It’s made-or-break. That’s how I felt, and I was worried; I think a lot of people were worried.”

She wanted to steer the party through redefining itself, while making sure it didn’t simply tread water. Ambrose measures her success so far in some key policy changes—at the Vancouver convention, for example, delegates voted to ditch the definition of marriage as between a man and woman—and a change in tone whose necessity had become obvious. “We heard it loud and clear from Canadians during the election. People felt there was an edge to some of the things we said,” she says. “Maybe it’s just because I’m a different person, I bring a different tone. But I think the tone mattered.” She describes the new tone, shaped in part by the role of the opposition holding the government’s feet to the fire, as “respectful but tough.” She says she tells her caucus to ask the smart questions citizens want answered.

Ambrose keeps in touch regularly with Harper, often simply to let him know when a caucus member is ill or grieving a death in their family. “He was the leader of this party for 10 years, and it must be a little odd to just not be here anymore,” she says. Laureen Harper is a close friend and Ambrose’s hiking partner, so she consults her more regularly than her husband—but in that case, it’s on issues like salsa recipes, not politics, she notes with a laugh.

Ambrose concedes that agreeing to be interim leader required no small amount of internal debate. “I know I shut one door to open another,” she says. “It was a very, very difficult decision, there’s no doubt about that. But I felt that this time of transition was such an important one for us.” To her, another measure of the strength of her party are the 14 people currently slugging it out for a chance to lead it.

But there’s a potential problem lying in wait: if Ambrose wanted the interim job to help shape the Conservatives at this existential pivot point, what if the leader chosen in May flies off in a totally different direction and undoes everything she’s proud of? She maintains the people running are all smart and experienced, and have the right to set their own mandates—if they manage to appeal to a broad swath of the base, that is. “I have a lot of faith in the common sense of our members. They haven’t failed us yet,” she says. “They’re common-sense, regular people that want to see lower taxes, balanced budgets—these are pretty basic issues that people care about.”

Of course, there is a more strategic way to view Ambrose’s decision to serve as interim leader instead of running for the permanent gig. Perhaps 2019 doesn’t look so bright for the Conservatives—or anyone trying to unseat Trudeau’s Liberals—so an obvious contender like Ambrose might be smart to let someone else give it a go while she waits for friendlier political winds to blow? She insists that this government has made some real missteps and her party is in a great spot to make 2019 a real contest. And with that, Ambrose neatly side-steps the real question, and she does it with a genial, polished smile.