The conservative roots of public apologies

Saying sorry for past wrongs may fit Justin Trudeau's brand of Liberalism, but conservatives started the trend in Canada and globally 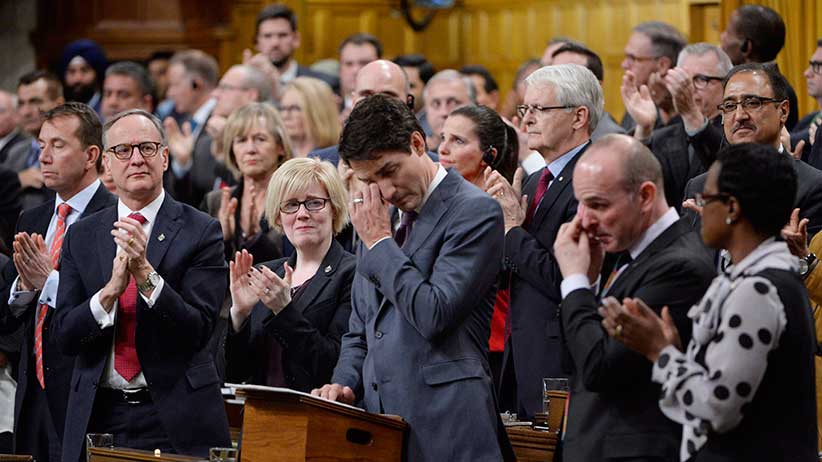 Prime Minister Justin Trudeau wipes his eye as he is applauded while making a formal apology to individuals harmed by federal legislation, policies and practices that led to the oppression of and discrimination against LGBTQ2 people in Canada, in the House of Commons in Ottawa, Tuesday, Nov.28, 2017. (THE CANADIAN PRESS/Adrian Wyld)

Nineteen-year-old Martine Roy had barely come to terms with her sexual identity when the military’s Special Investigation Unit arrested and prodded her for details about her sexual history. It was 1981 and there were three conditions for joining the army: you couldn’t be a communist, drug addict or homosexual.

Roy, who fell into the latter category, was expelled from the military after four years of intimidation and interrogations from her superiors. Along with her dishonourable discharge, she was deemed “not advantageously employable due to homosexuality.” She didn’t qualify for benefits or veteran status. She struggled to find employment, and with drug addiction and PTSD for years following her dismissal.

Roy is among the 9,000 or so members of the military, public service and RCMP who lost their job between the 1950s and early ’90s because of their sexual orientation or gender identity.

On Tuesday, Justin Trudeau formally apologized to those affected by the discriminatory policy.

The contrition is Trudeau’s second official apology for a historic wrong in less than a week. On Nov. 24, he was in Newfoundland and Labrador saying sorry to residential school survivors in the province who were left out of Harper’s 2008 apology.

The apologetic streak is in keeping with Trudeau’s brand of benevolent liberalism. (It’s also in stark contrast to his father’s position on acknowledging the wrongs of our past and trying to make amends for them.) Indeed, it’s tempting to credit the Prime Minister with pioneering a new age of open governance—one that can own up to past wrongs and, if possible, atone for them.

But according to Michael Marrus, a University of Toronto professor emeritus of history and politics, it isn’t Justin Trudeau’s Liberal government, or even Canada, that’s suddenly sorry. In fact, the trend is global and perhaps began not with liberals but with heroes of conservatism.

“Looking back, I think the vogue for public apologies for historic wrongs owes a lot to Pope John Paul II in the run-up to the new millennium,” says Marrus. In the last decade of the 20th century, the Pope made no less than 94 apologies on behalf of the Catholic Church, including for religious wars and the Inquisitions, to Jewish people, Black people, Indigenous people in Australia and New Zealand, to women and for the denunciation of Galileo.

“[The Church] cannot cross the threshold of the new millennium without encouraging her children to purify themselves, through repentance, of past errors and instances of infidelity, inconsistency, and slowness to act,” John Paul II wrote in 1994, calling the process “the purification of memory,” and setting the tone for the global slew of apologies that followed. As critic and novelist Marina Warner put it in 2002: “The theme of ‘apology’ is in the air: governments are saying it to former colonial subjects, or to political prisoners in post-dictatorships; former terrorists to their targets; banks and businesses to looted or polluted clients; churches and cults to victims of abuse.”

In Canada, the trend began even before the papal apology bonanza. In 1988, Conservative prime minister Brian Mulroney famously apologized to Japanese-Canadians for wartime removals and internment, whose plight Pierre Trudeau had refused to acknowledge. Since then, the Canadian government has apologized for the execution of Canadian soldiers in the First World War, the head tax on Chinese immigrants from 1885 to 1923, and Canada’s role in the residential school system. In his two years in office, Justin Trudeau has apologized for barring 376 Sikhs aboard the Komagata Maru ship from entering Canada and to Omar Khadr for Canada’s role in the abuses he suffered at Guantanamo Bay, along with the two contritions from the past week.

One of the elder Trudeau’s gripes with apologies was that once a government begins the practice, there’s potentially no end to the remorse. “We could mount pressure groups across this country on many areas where there have been historic wrongs,” he once said.

Marrus notes that there are guidelines—albeit rough ones—to what calls for an apology, and when. “I think when a matter has been in the public eye for a considerable time, and when it becomes evident that there’s a genuine thirst for public acknowledgement that has up to now failed to occur, then I think that’s a case where a public apology is warranted,” says Marrus, noting that Charter violations on the government’s part are obvious candidates.

In delivering the apology, Marrus says, “it should be sincere, thoughtful and involve some undertaking not to commit the same offence again.” In some cases, he adds, simply acknowledging that a person or group has been wronged can be an important step in the healing process.

Doug Elliott, the lawyer leading the class-action lawsuit on behalf of LGBTQ employees purged from their federal posts in the public service, says language—certainly in this specific case—isn’t enough. “Frankly, I would not be there for the apology if a settlement had not been reached,” he says. “Words matter,” he adds. “But if the Prime Minister was going to be making those statements and not write a cheque to the people who were hurt the most by the federal government’s actions, then to me it would be talking out of both sides of his mouth.”

Except for the Komagata Maru apology, all of Trudeau’s public acknowledgements have come with financial compensation. Settlements likewise accompanied Mulroney’s apology in 1988 and Harper’s in 2008—reparations that helped legitimize the sincerity of a practice Marrus calls “imperfect justice.” “It’s not complete,” he says, “but it so often represents a genuine effort, and as such, it has my respect.”