The Conservatives pull even; the protests turn ugly 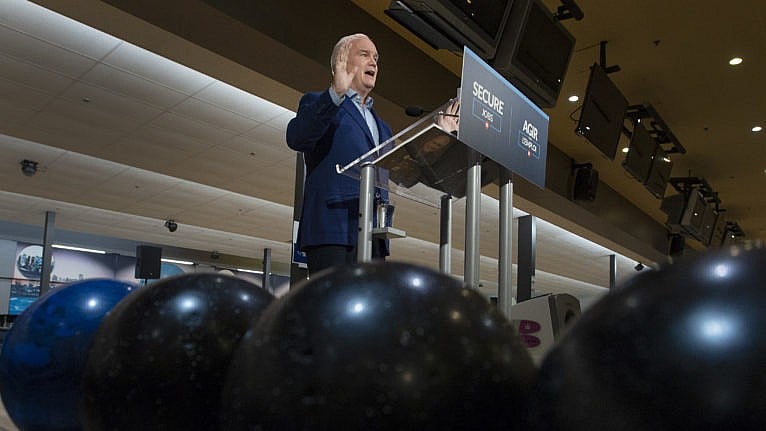 Philippe J. Fournier, Maclean’s resident poll ponderer, has sifted through all the polls and sees good news for the Tories. His model has the Conservatives and Liberals neck in neck—the Liberals projected to win 140 seats and the Conservatives 139—but the momentum is with the Conservatives. The Liberals have been losing an average of two seats a day since the election started.

The most significant movement in vote intentions comes from Ontario. When the campaign began, the Liberals held an average lead of 10 points over the Conservatives. Both parties are now tied in the province, and the seat projections in Ontario have moved accordingly:

That sudden shift to the CPC has the outcome up in the air.

Against all expectations just last month, the Conservatives should now be perceived as the favourites to win the most seats in Canada. Granted, today’s update puts the Liberals and the CPC in a statistical tie, but one party is in free fall while the other has been on the rise. The question is therefore: Will the CPC be able to maintain this momentum in public support until election day?

Dark portents: As the third week of the campaign begins, it’s looking nasty out there. In Cambridge, Ont., on Sunday afternoon, Justin Trudeau was drowned out by protesters chanting “lock him up,” CTV reports. The video shows an angry crowd.

The second week ended badly when out-of-control anti-vaccine protesters forced Justin Trudeau to cancel a rally on Friday night in Bolton, Ont. Trudeau scrummed later, calling for calm: “I know we have to work even harder to be there for each other, to support each other. We need to meet that anger with compassion.”

The Conservative candidate in the riding, former MP Kyle Seeback, said Saturday some of his volunteers were at the protest, and as a result they are “no longer welcome on my campaign,” CBC reports.

On Sunday, longtime Conservative MP Cheryl Gallant took down a video with an image of Trudeau being hanged, the Canadian Press reports. In the video, Gallant accused Trudeau of planning a “climate lockdown.” O’Toole declined to condemn her remarks. Trudeau called for him to do so. One protester had a poster of Trudeau being hanged.

National Post columnist John Ivison, who was at Bolton, wrote a column equating the out-of-control protesters with Trudeau’s own intolerance.

Yet he has no tolerance for anyone who dissents from his vision of the future. Those who disagree are not just in error, but in sin. There is no recognition in this vision that it is as divisive, if not more so, than Stephen Harper’s brand of hardball politics.

In the Star, Susan Delacourt has a thoughtful take, pointing to the way attacks on Trudeau often feminize him.

For years, Trudeau haters have been spewing the same kind of bile they usually hurl at women politicians; mocking his hair, his family and casting any success as the product of smarter men around them. There’s a direct line between that mockery and the taunting hordes on the campaign trail; the sneering contempt.

Former Paul Martin staffer Scott Reid, on Twitter, opined that the protest and Trudeau’s response offered an opportunity for the Trudeau campaign to get back on track.

Not currently on track: The Liberals appear to be in deepening trouble, according to the rolling polls. EKOS had the Liberals trailing the Conservatives 35-29. Nanos has them 33-31. Mainstreet has them 38-28. The NDP is at 19 or 20 in all three.

Veteran pollster John Wright thinks it’s all over but the crying.

In Maclean’s, Paul Wells has a bit of fun with a Star story from last week in which a senior anonymous Liberal said “Justin Trudeau does not do shakeups. That is not in his nature.” Wells checks the record and finds that is not so.

This corner offers no general opinion on the utility or otherwise of shakeups. If you need to make a change, you make a change. If it works, it was a good idea. In the case at hand, I see no point in replacing people with new people who were raised in, and participate in, the deeply flawed assumptions that have characterized this campaign.

Cinq chefs: Trudeau, O’Toole, Yves-François Blanchet, Singh and Annamie Paul were grilled at length on Radio Canada Sunday night by a panel of three journalists. It was not a debate, since there were no head-to-head exchanges, but a sustained exploration of the leaders, with tough questions on vaccines, climate and abortion, among other things. Your correspondent thought Trudeau had the best of it, seeming sharper than he has been lately, but the other leaders handled themselves well. The only verdict that matters will come from French Canadian viewers, which we await news of today.