The Conservatives, the party for the manly man? Hardly. 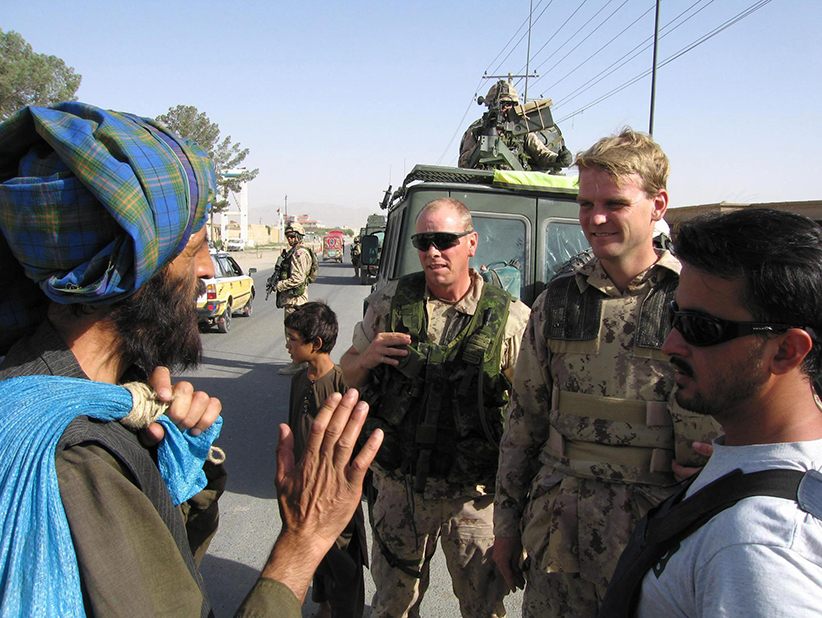 Canada’s ambassador to Afghanistan Chris Alexander, second from right, speaks with a resident through an interpreter about Afghanistan’s upcoming elections in Kandahar, Afghanistan on Tuesday Aug. 16, 2005. (Terry Pedwell/CP)

I grew up surrounded by masculine archetypes: bush pilots, farmers, roughnecks and prospectors. To them, the “Marlboro Man” wasn’t some idealized version of manhood; he was a silly model in a clean shirt. These were tough men, worn and scarred, but scared of nothing. And they all voted Conservative.

There really wasn’t much choice. How could you support the other guys? The NDP were effete socialists and the Liberals were equally craven urbanites, frightened of their own shadows. Real men voted Tory.

This was part of a much older and wider convention. In the United Kingdom, the conservative ideals of strength and fortitude were epitomized by Winston Churchill, whose entire persona could be summed up in one line of a speech he gave in Ottawa: “Fear no foe. All will be well.” Later, Margaret Thatcher reinforced this belief that a true conservative was “not for turning.”

Related: What happened to the debate over gun control?

Likewise, Republicans in the United States constantly tied the ideals of masculinity, fortitude and courage to their brand. Consider how they characterized Ronald Reagan versus Jimmy Carter: the tough cowboy versus the sweater-wearing wimp.

For decades, and across the English-speaking world, political conservatism was explicitly associated with undaunted masculinity. But not anymore.

Now, conservatives are scared of everyone and everything. A skinny brown kid brings a homemade clock to a Texas school. A woman wears a niqab to her Canadian citizenship ceremony. An Alberta mother tries to treat her child’s severe epilepsy with medical marijuana. Everywhere they look, the political right is frightened. While they once imagined themselves as the barrel-chested man’s man, they’ve now become the clichéd housewife standing on a chair, shrieking at a mouse.

I thought about this after listening to Chris Alexander speak last week. I knew Alexander before he was a Conservative politician. We worked together while he was our ambassador in Afghanistan. I was once instructed to chastise him for his habit of going for daily jogs through central Kabul. His close-protection team would surround him on these runs, but they were no defence against car bombs and lone gunmen. Another time, I sat in his office, a few days after a large explosion had blown all the windows out of the Embassy, and listened to him literally laugh at the danger. Fear no foe. All will be well.

Related: What Chris Alexander really thinks of the media

That was a long time ago. Now, safely back in Canada, in his suburban riding of Ajax–Pickering, Alexander is frightened. In response to wide public support to increase the number of refugees we accept, the Conservative party grudgingly agreed to accelerate their very modest plan. But their announcement did not emphasize the generous instinct of Canadians, nor the unprecedented humanitarian need. It stressed how scared we should be. “Security screening will remain the top priority,” Alexander assured us.

Implicit in that statement was the message that we should fear refugees, and the disease and terror and instability they can bring to our country. In fact, every message from the Conservative party highlights something that frightens them. The global economy. Justin Trudeau’s age. Mulcair’s budget. Crime.

Consider that last danger. Stephen Harper is regularly warning that more must be done to keep us safe, by imposing longer sentences, building bigger prisons, reducing parole. But crime rates in Canada have been declining for decades. There are fewer property crimes now than there were in the 1960s. So why is he so scared?

Perhaps it was inevitable. Conservatives everywhere have been campaigning for years on the proposition that they are the strongest and bravest. But, for that to matter, there must be a counter-threat, something that requires a real man like Stephen Harper in office, not a wet academic like Stéphane Dion or a mincing toff like Michael Ignatieff.

So they talk up the threat. It used to be the commies. Now it’s the terrorists. And the drug dealers. And the brown people. And the reckless spenders. And the environmental activists. And the census takers. Everyone and everything. They’ve spent so long warning us to be constantly afraid, they’ve internalized it. They have literally frightened themselves.

And now, ironically, the Conservative party is whom you vote for if you are timid and emasculated, if you go to bed scared and wake up worried.

And what of Chris Alexander, who used to strap on body armour and helicopter into hostile districts to stare down warlords? He’s scared of a young woman in a niqab and a homeless family in Turkey.