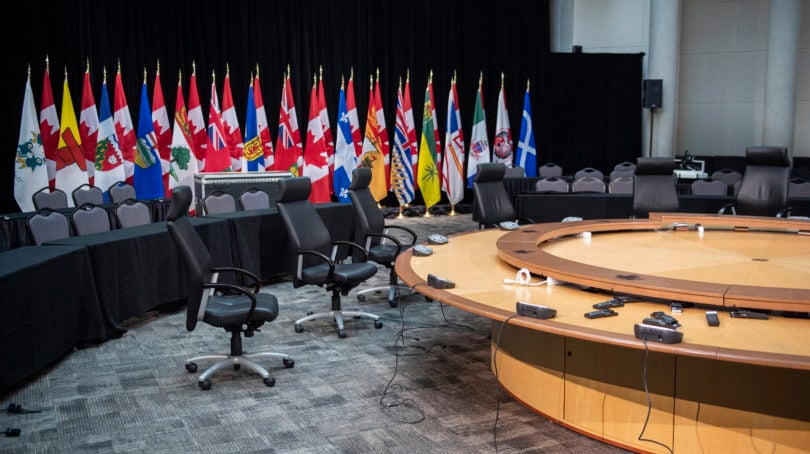 Swivel chairs surround a table in the large meeting room at the John G. Diefenbaker Building, where Prime Minister Justin Trudeau was set to attend the First Ministers' Meeting and hold meetings with national Indigenous leaders before it was cancelled due to the COVID-19 outbreak, in Ottawa, on Thursday, March 12, 2020. (Justin Tang/CP)

Yesterday morning, Prime Minister Justin Trudeau was planning to convene a two-day first ministers’ meeting in Ottawa. Albertans were free to gather for concerts, sports, you name it. Schools in Ontario were set to return after March Break. And you might have been thinking about the Manning Networking Conference, slated to start two weeks from today.

By the end of the day, the FMM was cancelled and Trudeau was in self-isolation as his wife, Sophie Grégoire Trudeau, was tested for COVID-19. Last night, that test came back positive (Grégoire Trudeau’s symptoms are mild). Alberta’s top doctor, Deena Hinshaw, announced that groups of 250 or more could no longer meet—and she advised Albertans to avoid international travel. Ontario has extended the school March break an extra two weeks. And the Manning meetup was cancelled, suffering the same fate as so many conferences.

Phew. The pace of the COVID-19 news cycle quickens seemingly by the hour. But Maclean’s writers are watching every update. Everything you need to know is here:

We also have lots of analysis:

There was, of course, other news yesterday in Ottawa. And it would have been bombshell news any other day. The National Security and Intelligence Committee of Parliamentarians, the panel charged with reviewing the work of Canada’s intelligence agencies, published a redacted version of its annual report.

The report confirms that Russia and China are engaging in foreign interference in Canada at all levels of government—not exactly new information, but a significant disclosure in a public report. A separate report from the committee alleged the Department of National Defence might be violating the Privacy Act as it collects information about Canadians abroad.