As MPs debate new legislation in the wake of the Ottawa shootings, Canada will and must carry on—always glorious and ever free. 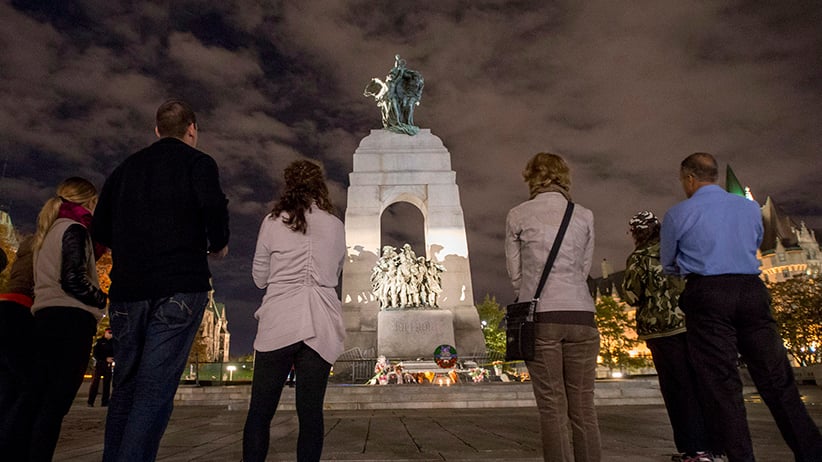 Last week’s shocking attack in Ottawa is not the first time our capital has suffered a fatal act of political terror. It isn’t the first time a legislative building in this country has been invaded at gunpoint, or that we’ve been threatened by a foreign foe. Trials of this sort are an unfortunate side effect of life in an open society. What’s crucial to remember amid the anger and other reactions is that we’ve survived all previous efforts to sabotage our freedoms and democratic institutions. And we’ll carry on after this outrage, as well.

As students of Canadian history will know, just a short walk from Ottawa’s National War Memorial. where Cpl. Nathan Cirillo was gunned down, Thomas D’Arcy McGee, a leading Father of Confederation, was also shot and killed in 1868 by Irish terrorists of the Fenian Brotherhood. A hundred years later, in 1970, our country was convulsed by the FLQ during the October Crisis. Ottawa has also been the site of several well-planned acts of terror by Armenian militant groups directed toward the Turkish embassy, including the assassination of a military attaché in 1982. And, in 1984, a deranged soldier vowing to destroy the Parti Québécois government shot his way into Quebec’s National Assembly, killing three and wounding 13, before being talked down by the provincial sergeant-at-arms.

Related:
Aaron Wherry: Parliament will carry on
Ottawa shooting: How the terror unfolded
‘Has our beautiful Hill lived out its own age of innocence?’
Remembering Cpl. Nathan Cirillo

Now, Canada has come under attack once again. Last Monday, Warrant Officer Patrice Vincent was run over and later died from his injuries in a parking lot in St-Jean-sur-Richelieu, Que. Two days later came the murder of Cpl. Cirillo and the culminating shoot-out in the halls of Parliament. In both cases, uniformed Canadian Forces personnel were targeted. Both appear to have been carried out by troubled Canadian citizens who self-radicalized, perhaps in response to the recent call from Islamic State that adherents around the world should “kill a disbelieving American, or European . . . French, Australian or a Canadian or any other disbeliever.”

Fenians, FLQ, militant Armenians, deranged anarchists, Islamic State. Canada has suffered them all. As Prime Minister Stephen Harper said shortly after the attack, we have been served a bloody reminder that “Canada is not immune to the types of terrorist attacks we have seen elsewhere in the world.” The price of liberty is eternal vigilance, the saying goes. Some periods in our nation’s history require more vigilance than others. Now appears to be one of those times.

So what will be the consequences of this week’s events?

The attack in Ottawa certainly raises questions about security on Parliament Hill. The Harper government is also unveiling new legislation aimed at expanding its legal authority to combat terrorism. But while a detailed examination of both incidents, current legislation and opportunities for prevention are all warranted, we need to keep in mind the context. Canadian police forces enjoyed sufficiently broad powers to dismantle several recent cabal-type threats in this country. Lone-wolf attacks of the sort we experienced last week, however, present a more difficult (though notably smaller) threat. The fact the RCMP had already seized the passport of Martin Couture-Rouleau prior to his hit-and-run on Warrant Officer Vincent suggests that current surveillance procedures are reasonably sufficient to identify individuals at risk of self-radicalization. There may not be much more the police can do to prevent small-scale acts of terrorism without eroding all Canadians’ basic liberties. Our goal here must be to contain the threat.

Instead, the real point of focus should be the remarkable manner in which everyone responded to the crisis in Ottawa. We refer not just to the sergeant-at-arms of the House of Commons, Kevin Vickers, although he certainly deserves recognition for his central role in ending the drama. Equally worthy of note are the many first-responders who raced toward Parliament Hill while telling others to get to safety. The same goes for the passersby who stopped to aid Cpl. Cirillo as he lay bleeding—one, Barbara Winters, movingly telling him: “You are loved.” And all the MPs, staff and others in Ottawa who simply got back to work the day after the attack, steeled with a resolve to carry on.

Since we will never escape the threat of terror, no matter what age we live in, we cannot allow such events to change our institutions, freedoms or attitudes in any fundamental way. Neither can we ignore our international obligations, including Canada’s participation in the fight against Islamic State in the Middle East. Considering all this, perhaps the most eloquent summary of the real and lasting effects of last week’s events comes from Thomas Mulcair, leader of Her Majesty’s loyal Opposition. “We woke up this morning in a country blessed by love, diversity and peace,” he said on the evening of the Ottawa attack, “and tomorrow, we will do the same.”

Canada must be vigilant when necessary. And always glorious and free.