Mike Duffy, loosed from the courts with all charges dismissed, returned to the Senate to work—or, at least, some absurdist interpretation of the term 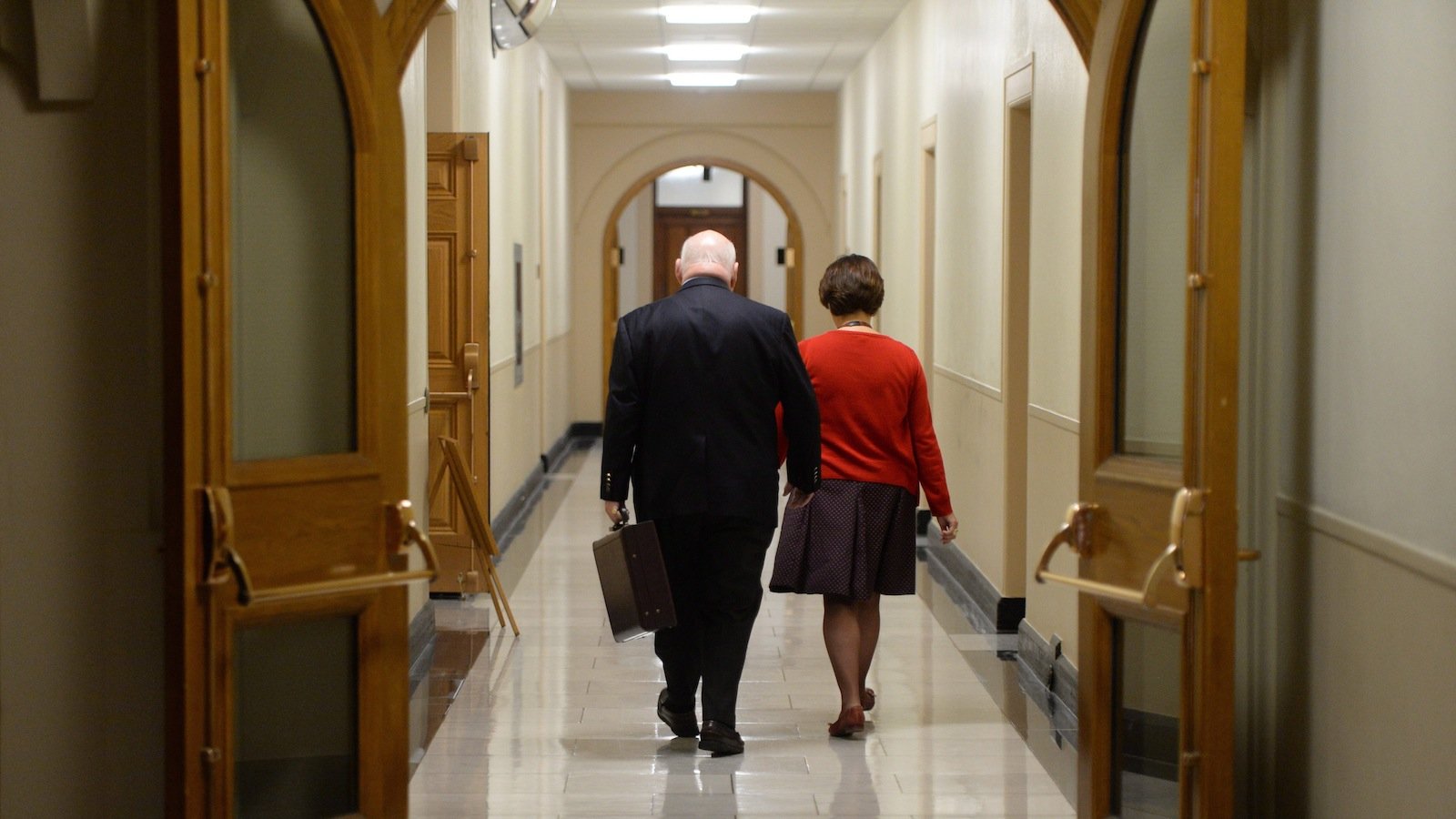 Senator Mike Duffy returns to Parliament Hill in Ottawa on Monday, May 2, 2016. THE CANADIAN PRESS/Sean Kilpatrick

It was, for Sen. Mike Duffy, a question of whether you can step into the same river twice.

If Duffy was to report on his findings—and he apparently won’t, for he has adopted a policy of silence whenever he finds himself outside a courtroom witness box—he would undoubtedly tell us that the river of public business flowing through the red chamber is as nutrient-free, as fishless, as unpotable and as unpalatable as ever, that his fellow senators remain largely useless, their work sterile, but that the room itself remains beautiful, with wood paneling and gargoyles, and suffused with the gold light from the stained glass above.

Duffy would say all this, if he was talking—but again, he isn’t, he assiduously avoided gazing directly at the gathered reporters as he walked in. He left at the end of the day under the protection of security personnel, who took the highly unusual step of escorting him through the assembled gauntlet of news reporters.

Although he was similarly hounded by the press outside the Ottawa courthouse during his criminal trial (which ended with a ruling last month that dismissed all 31 fraud, breach of trust and bribery charges laid against him), here on his home turf—the Hill, where he was a broadcast news star for years before his Senate appointment—it was awfully strange to see: the hunter Actaeon turned into a stag and devoured by his own hounds.

Duffy sat relaxed and motionless for the duration of today’s three hours of Senate business, over there in his corner of the chamber where the exiled are stationed.

Really, you had to crane your neck—waaaaaaaaay back there, just next to where former Tory Sen. Patrick Brazeau would be sitting were he not still suspended; very near to Sen. Don Meredith, the married Pentecostal pastor who quit the Tory caucus last year over a scandal involving a certain young woman; just by Sen. Pamela Wallin, also no longer a Conservative, and who remains under investigation by the RCMP for alleged spending infractions similar to those that landed Duffy in court; a few desks down from Anne Cools, ejected from the Tory caucus long before, almost 10 years ago, after the Harper government became unhappy with her unwieldy ways.

Reporters arrived hoping to hear Duffy speak. For many of them, it was quite the field trip.

Even veteran Hill journalists found themselves unable to identify many of the players milling about below them, so rarely is there news to report or reason to come here. The Senators in turn raised their eyes to the press gallery: they were shocked to see so many interlopers there, people who appeared ready to sit and look at them all day. As the chamber filled, the Ol’ Duff received a steady stream of visitors at his desk—back-slappers, elbow-squeezers, ear-benders.

Duffy, the fallen angel of the red chamber, had last set foot here in October 2013, to deliver the second of two fiery speeches, protected by privilege, defending his conduct as a senator and condemning the back-room schemes of the Harper PMO.

His return today, as a senator in full standing, could have been a sensation.

Instead, what we heard was a series of speeches, not by Duffy, but that were worthy of grade-school presentations. One concerned the base frivolity of the anti-sealing lobby, for example; another examined the worthiness of keeping marine mammals captive, at the Vancouver Aquarium and at the Marineland theme park in Niagara Falls.

This last one was a doozy.

Tory whip Sen. Don Plett stood in the chamber to explain how a sagging dorsal fin is indicative neither of stress or sickness, but of the proper functioning of the Earth’s gravity; how keeping whales behind glass as attractions reduces the number of marine mammals shot in the wild; and how the celebrated 2013 documentary film Blackfish is baseless propaganda.

All around him as Plett spoke, the sun laid down honey-golden light straight from an Impressionist masterpiece, and the beauty of the setting—the Senate chamber in waning afternoon—made the little people inside it seem even more ridiculous than they might have otherwise. It was an amazing feat.

Worse still, the matters of actual substance discussed today amounted to absurdities, a situation that not even a visit by Finance Minister Bill Morneau, who came to take questions, could fix (his arrival coincided with the senators’ nap time).

Sen. Peter Harder, newly appointed by Justin Trudeau’s Liberal government, argued for the wisdom of a terminology shift that reflects, at least in vague terms, the Liberals’ efforts to reform the upper house by stripping its senators of party affiliation.

That, of course, leaves Harder calling himself not “leader of the government in the Senate,” but “government representative,” though his whip stays a whip. The debate on these points, which even pitted old Liberal senators against those newly appointed by the Liberal government, sounded like the dialogue from an alien world in Gulliver’s Travels, or from George Lucas’s later additions to his Star Wars franchise—a brand of circular bureaucratese that employs nonsense words like midi-chlorian or Lilliput.

“This is an evolving institution,” Harder, smart and trim and with excellent hair, told the room, but it was hard to take the point seriously.

“Why are you playing with words?” replied Sen. Jim Munson, appointed by former Liberal prime minister Jean Chretien. “Just tell it like it is! You are the government leader in the Senate!”

Duffy, meanwhile, sat through it all like he’d never left the place. He seemed less interested in the proceedings than the members of the press gallery gathered to watch. He played on his computer and stroked the face of his smart phone, his reading glasses perched low on his nose. Presumably he’d not come to talk. Reports said he’d been seen eating lunch earlier in the day with Wallin, another broadcaster-turned-senator, and she popped over to consult with him several times during the afternoon.

At one point, Duffy pssssssst at her, she looked up, and he pointed at his phone, indicating he had just sent her a message. That prompted her to consult her device. It was cutting-edge note passing; for Duffy, things had quickly became old hat again.

It was, truth be told, like nothing had changed at all over the course of his absence—Harder may no longer be “government leader,” and yet his status as “government representative” does not magically make the business of the red chamber any more meaningful. Harder himself sat there at his desk as though stunned—as though it had only just dawned on him that his appointment to the Senate was, in existential terms, a serious life demotion.

Duffy, meanwhile, was Fortinbras at the end of a warped version of Hamlet, marching into Denmark to find its inmates not strewn across a battlefield, but still shouting at each other, none of it to any effect whatsoever. Nothing had changed, and he was back to benefit from that beautiful stasis. When he left with his security escort, it was as though there was a strange surge of confidence in him, like he was feeling the cool metal of the levers to his old tricks against the palms of his hands all over again. He could not wait to pull them. The nightmare was over.