The Canadian, who was stranded in Sudan for six years, tells his story for the first time 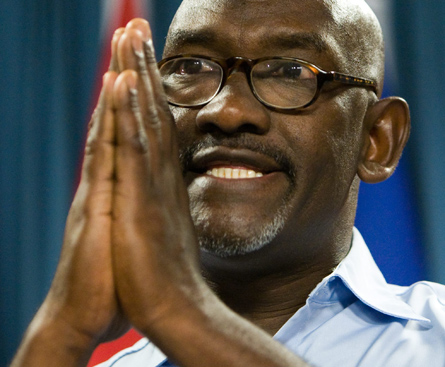 10:20:09 AM
Greetings, fans of truth and justice for all, including Canadians moored in dire circumstances abroad! ITQ is on the scene at – sigh, the Charles Lynch Press Theatre, which, for the record, is definitely *our* second choice ballot pick when it comes to Hill media venues. It’s small, and cramped, and there’s no simultaneous interpretation, so unless the speaker du jour brings along a French or English body double, Sheila Weatherill-style.

Anyway, the room is filling up quickly, and there is, of course, a camera crew gauntlet to be run in the hall, but otherwise, nobody really knows exactly how today will unfold. Will we have a series of consecutive/concurrent press conferences in reaction, like with the Weatherill report? Nobody knows. Oh, except we *do* know that the government – or at least Lawrence Cannon – will have no comment to make. They complied with the court order, and that’s all they have to say.

10:26:44 AM
Well, his *team* is here, at least — and I think I may have spotted the star of the show amongst the dozen-or-so lawyers, advisers and well-wishers in his entourage. Team Abdelrazik comes bearing documents, it turns out – very ominious documents that I’m probably not going to have the chance to go through in detail before this starts. They involve Foreign Affairs, though — I can tell you that much. I’m sure he’ll have more to say when he takes the floor.

10:30:08 AM
Okay, I can also confirm that there is an impressive list of experts available for comment, according to the news release, from Gerry Caplan to Warren Allmand to Maher Arar, and all the usual suspects in between.

10:32:31 AM
And there he is – really this time – walking to the – is that a lectern? Oh, I’m not going through this again, let’s just say it is – accompanied by two lawyers, one of whom is giving us an overview of what we’re going to hear. One of my colleagues just spotted Irwin Cotler, and I swear I saw Serge Menard earlier, but that might have been a hallucination. I keep thinking that I see Tom Flanagan out of the corner of my eye; it’s quite disconcerting.

Anyway, he’s speaking now – I’m definitely going to be using that pronount a lot, since it’s easier to type that Abelrazik – and sounds like a man more inspired than outraged, as odd as that may be. He starts out by describing the harassment he and his family have endured at the hands of CSIS — including while his wife was dealing with cancer — as well as her father. It’s a tale that is, sadly, not all that shocking, or terribly hard to believe; I was at Maher Arar’s first press conference, when you could have heard a pin drop, but so much has come out since then that it’s hard to be surprised by these revelations. Not, I should note, that this makes his claims any less harrowing, if true.

10:38:21 AM
He’s going through the story chronologically – we’re in 2003, and his wife has died; he’s still being tormented by CSIS, and he wants to go back to Sudan. He called the police on CSIS – hah! – who proceeded to ask the agents to leave – wouldn’t you love to have been a witness to that? – and a short time afterwards, he does, indeed, go back to Sudan to take care of his mother. Despite being on the other side of the world, he’s still being stalked — this time, by Sudanese intelligence.

10:40:50 AM
And now, the imprisonment — twelve days in a cell no more than a metre and a half, and no idea why. “Kind of scary,” he comments, somewhat spectacularly understating it.

Finally, they began questioning him — but about Canada, not Sudan, leading him to the obvious conclusion that it was CSIS that orchestrated this particular little venture in outsourcing intelligence gathering. He notes that he didn’t have the right to ask where they were taking him — the Sudanese police, I think — but they told him that his “friends” — his “Canadian friends” wanted to talk to him, and proceeded to bring him to a room with a “big table”, full of — cakes, and other food. (Must not make cookie joke.) He stood behind the table, and a man told him that, as he – the man – told him in Montreal before he left, he – Abelzrazik “would see”. Whereupon they asked him the same questions, over and over. He asked to go home – to Canada, and his chldren – and even offered to face charges there, if they had evidence, but the agent – or whatever he was – dismissed that — he was Sudanese, not Canadian, and this would be his Guatanemo.

10:46:59 AM
At that point — after he’s taken back to the Sudanese prison — the torture begins, and it just keeps going. He begs them to bring him to court, or hire him a lawyer, but the response is that there are no lawyers, no trials, and if he doesn’t “shut his mouth”, he will “face difficulties”. He went on a hunger strike for seven days, which got him transferred to “another place”. We’re up to July 2004 now, and he’s still trying to get back to Canada, but even when the Canadian consul meets with him, he discourages him — why not deal with the situation there? He then “stops by” the Canadian embassy, and meets with the ambassador, and that he was afraid he would be arrested again, but the ambassador assures him that won’t happen. He, not ununderstandably, is sceptical, and explains the history of being arrested, re-arrested and kidnapped by the Sudanese police; which, as it turns out, is what happens next. (No, I’m not totally clear on the timeline either — my apologies — I’m just trying to follow the narrative as closely as possible.) Anyway, he heads back to prison for another seven months, and it’s the same thing — beaten by a hose, tied to a door, “other horrible stuff”. It’s worse, though, because he also got sick — malaria, typhoid, more hunger striking. But the situation continues.

10:52:58 AM
In March 2008, he ends up at the Canadian embassy — no, I’m not sure when he got out of prison — only to be interrogated; about his views on Bin Laden, on Israel, on the September 11 attacks. He tells the interrogator – not clear if it was the ambassador, or an attache – that he wants to go back to Canada, and – oh, apparently there were MPs at this meeting, including Deepak Obhrai, who had no reaction when he showed them his scars. He told Obhrai that he wanted to go back to Canada, and he – Obhrai – wouldn’t even look at him, although he did tell him that he wouldn’t be going back to Canada.

A month later, he went public with his story, and his lawyers advised him to take sanctuary in the Canadian embassy — which, for him, was like a prison itself; the torture was mental, not physical, but still took its toll. After fourteen months, he finally made it back to Canada.

10:56:18 AM
“This has been a very difficult time for me,” he – one again – understates. I — just don’t think it’s possible for any of us to truly understand, unless our names happen to be Maher Arar, or one of the others etched in recent regrettable history — and it’s not over. He needs his name off the watchlist, and he wants to live his life like a normal person – a normal Canadian – and he wants those who played a role in his ordeal to face justice.

10:58:11 AM
And — questions. First up, the Globe’s Paul Koring – who has owned this story, y’all – who wants to know if he could identify the CSIS agents who interrogated him; yes, he could – thin, tall, he’d know him if he saw him.

10:59:33 AM
Global National wonders whether he has any idea *why* CSIS was so relentless in its pursuit of him. Had he ever done anything that would have invoked such a response? He doesn’t know — but repeats his offer; if there is evidence against him, bring it forward.

11:00:39 AM
A question for the lawyers, from CTV’s Bob Fife, on the correspondence that appeared in the Globe earlier this week, which suggested that the Canadian government was prepared to let the Sudanese authorities kill him. The lawyer – sorry, I didn’t catch his name – agrees there should be accountability.

11:02:13 AM
How does he feel about CSIS and the Canadian government, after his ordeal? I would’ve thought that would be an easy question, but it isn’t — he’s clearly struggling to put what he describes as “mixed feelings” into words. He’s not seeking compensation at the moment — he wants his name off the list — but leaves the door open to doing such in future.

11:03:39 AM
What does he have to say to the “grassroots people” who supported him, and brought him back to Canada? Thank you. It was a little longer than that, but that’s the gist, and it’s all that has to be said, no?

11:04:26 AM
A question from the back on the process of removing a name from the list, which requires ministerial involvement; so far, the minister responsible — Peter Van Loan — hasn’t been willing to meet with them.

11:05:45 AM
Asked about what his life is like now – in Montreal, that is – his answer is poignant: He may be free, but when he walks the streets, he’s still in isolation; he can’t look for a job, or even get health care.

11:06:53 AM
Oh, on the matter of the accountability that he wants to see — his lawyer steps in to explain that at this point, he’s not made any decision on seeking compensation, but he does want answers from the government entities involved. He won’t list them – oh, lawyers, always so cautious – but notes that we can infer which ones would be on his list.

11:08:10 AM
The Toronto Star’s Joanna Smith asks him to respond to the allegations against him – tried to join Al Qeyda, something about wanting to fight with the Chechens — and he notes that he’s a Muslim, but he’s never seen Bin Laden in his life, and — wait, there’s some reporter here that I’ve never seen before, and I suspect may be a – shall we say, a citizen journalist, who just interrupted her in mid-followup, which is — really not going over well with the rest of us. A lot of “Who the hell *is* that” being mouthed to each other.

11:12:47 AM
A few questions about what, exactly, he was asked about by the CSIS-linked interrogator in Sudan — why Israel? Why Hamas? Had he ever even been to Afghanistan? No, he hadn’t, it turns out — and as for Israel, he told Obhrai repeatedly that he wasn’t even Palestinian — he was Sudanese — and he’d never been to Palestine *or* Israel.

11:14:34 AM
One final question, it turns out — about the response from the government to the Globe story, in which Foreign Affairs pointed out that he had been living open and freely in Sudan, and had even remarried and had another child. His response? Yes, he did remarry and have a child — and no, they’re not in Canada now. But on that enigmatic note, his lawyer wraps things up, leaving us to try to figure out what, exactly, we’ve heard.

And that’s it for me — hey, there’s Dr. Dawg! If there are any followup pressers, I’ll be there, but for the moment, I’m going to sign off and try to read through these documents.