Paul Wells: When will the spending stop? What is 'building back better'? How will the gender impact of the crisis be fixed? The answers will come later. 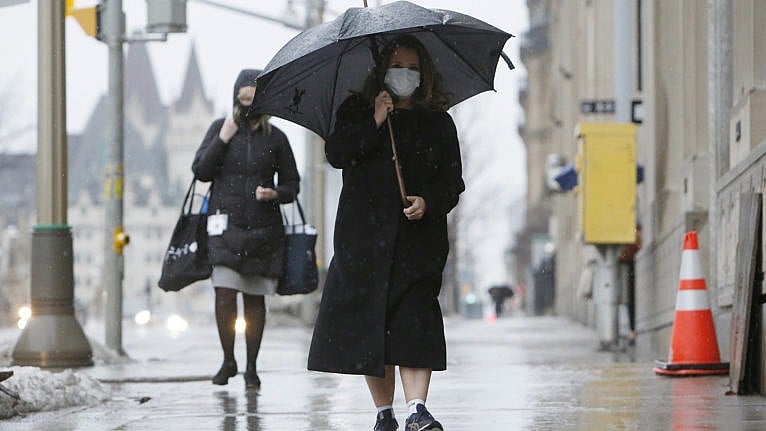 Freeland arrives for a news conference for the fiscal update in Ottawa on Nov. 30, 2020 (David Kawai/Bloomberg via Getty Images)

How much is this crisis going to cost, anyway—in dollars, if not in human suffering, which will always be harder to tally? What does “building back better” entail? How will the Trudeau government redress the disproportionate burden of the 2020 economic crisis on women? Which criteria will guide its spending decisions after the crisis ends, or indeed after the sun rises tomorrow? Today was the day Chrystia Freeland finally delivered answers to these questions and more, and in every case her answer was “I will tell you the answer some other time.”

This is the Trudeau government’s second thing-that-is-not-a-budget this year. In July there was an Economic and Fiscal Snapshot at 168 pages. In November there’s a Fiscal and Economic Statement at 237 pages. What’s changed? The identity of the finance minister, of course, has changed, for reasons that continue to shift with the telling. The manner of the finance minister, on the other hand, holds steady. In November as in July, there is certainty about sums spent to date and concentric circles of uncertainty about everything else.

There’s good reason for both—for the spending to date, and for the uncertainty. What happened in March was that much of the world economy stopped functioning from one day to the next. People lost their capacity to act as clients, sellers, passengers or audience members. All of these roles would return, but in the meantime someone had to cover the cost of maintaining a holding pattern. It couldn’t be individuals: Canadian households’ credit market debt was $2.3 trillion in July, though it had declined by July as government, an entity that was in better shape to borrow at reasonable cost, took up the burden. And the government lifting the burden couldn’t, in most cases, be provincial: most provinces have much less fiscal capacity than do the feds, as the Parliamentary Budget Officer has pointed out.

So debt had to balloon, and it’s done so, in the only place where there was room: the federal government. And there is room: it’s been fashionable to complain about Justin Trudeau’s deficits, which exploded this year, but the cost of carrying that debt remains near historic lows, as this chart from Freeland’s update shows. 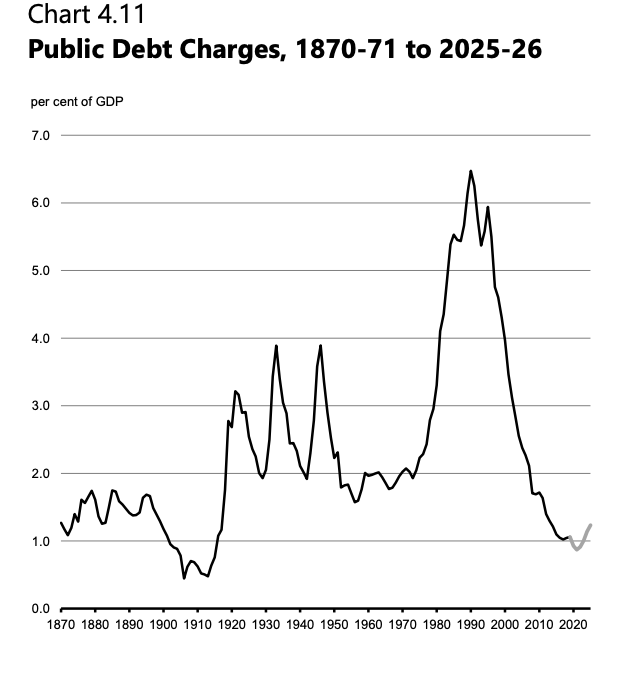 In fact, because the federal debt burden was on a solid downward track when Trudeau was elected, there’s been room for the Liberals to be more ambitious with their COVID support than many other countries: 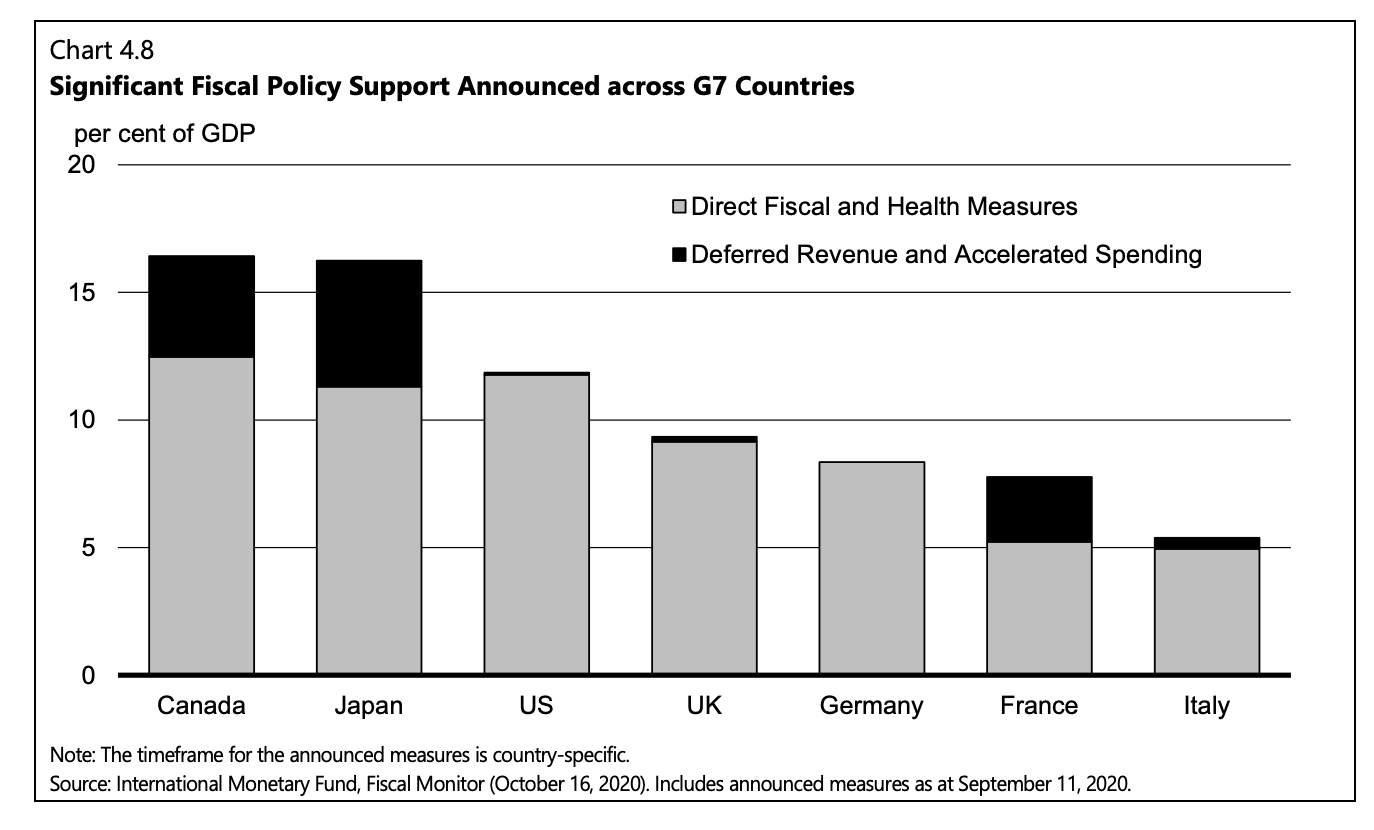 It’s been an inglorious year. The role of government has in large measure been to pay people to stay home, if they could, and businesses to sit empty, if they could. Canada can pay more, because prime ministers from Brian Mulroney to Stephen Harper wrestled a nasty debt burden to the ground and kept it there. Justin Trudeau can afford to decry austerity because every prime minister after Pierre Trudeau was, at least in comparison with the Trudeau at either end, austere.

When does it end? Of course nobody knows, and Trudeau and his assorted finance minister have used that fact to justify delivering almost anything except a formal budget. Hmm. Somehow France and Japan and Germany and Italy and  Portugal and Ontario managed. But in every case the numbers are moving targets anyway. Freeland’s update notes that the Liberals announced $87.7 billion in new spending since Morneau’s summer snapshot, and goes on to announce $54.6 billion in specific new, new spending, as well as $60-$100 billion in as-yet-unspecified newer, newer spending to “stimulate the economy” once the immediate health crisis is over. I find it impossible to imagine this government spending at the low end of a range, so call it $240 billion in new spending since July.

Freeland repeated several times that the spree won’t go on forever. I believe this to be true. But anyone looking for hints about how it will be brought to a halt will be disappointed. There are comically vague references to “guardrails” and an “anchor.” The guardrails Freeland defined, loosely enough as to make them meaningless: spending will end when this government thinks it’s time to spend less. The anchor is undefined entirely: Freeland will tell us later, she promises.

So much for the top-line spending action. What about details within the totals? Well, I’m delighted to announce that after eight months of debating what “building back better” means, we can now reveal that it means close to nothing: a slow build to a half a billion dollars in 2024-25. Plus the $60-$100 billion to continue infrastructure spending at about the rate Trudeau’s already been spending on infrastructure (which is why I put “stimulate the economy” in quotes a few paragraphs ago: to be stimulative, fiscal action must first be perceptible by anyone).

How will the gender impact of this crisis be fixed? It’s a serious and important question. The answer will—stop me if you’ve heard this one—come later, and be delivered by people not currently on the federal payroll. There will be an Action Plan on Women and the Economy, to be developed by “a task force of diverse experts.” Add that to the “net-zero advisory body” that Jonathan Wilkinson, the environment minister, said last week will make absolutely every hard decision about how to reverse 30 years of broken carbon-emission promises. And the former NATO commander who will be put in charge of vaccine distribution.

This willingness to offer up the toughest decisions of government to people who aren’t in government is the latest intellectual fad in the PMO, after the intense spate of “incident response groups” that lasted a few months a year ago, and the “deliverology” craze of 2016, and the mad instant in 2016 when it seemed possible to believe Scandinavian pension funds would pay for the Canada of tomorrow. I am all for diverse advisory bodies, and I like them best when they are accountable to Parliament and supported by a quarter of a million public servants. The fancy name for such a creature is a Cabinet. Its decisions will not be easier after the latest advisory panel reports, although there’s a good chance those decisions will be pushed back past the next federal election, and I suppose I can’t be entirely sure that’s not the point of the whole thing.