The fall of the feminist Prime Minister

Shannon Proudfoot: The Daughters of the Vote, 338 young women, filled the House of Commons and with devastating timing turned on a leader they once admired 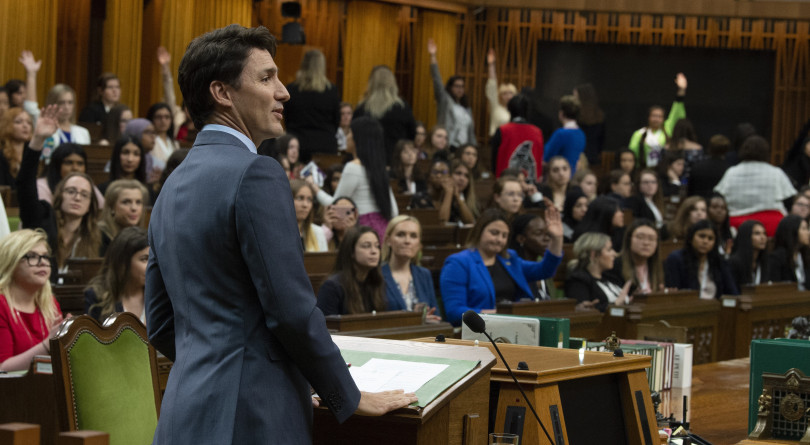 Trudeau looks to the audience for a question following his speech to Daughters of the Vote in the House of Commons on Parliament Hill in Ottawa, Wednesday April 3, 2019. (Adrian Wyld/CP)

For a few hours on Wednesday morning, every seat on the floor of the House of Commons was occupied by a woman—338 of them, with a couple of their babies along for the ride. The usual ratio of the place runs about three-quarters male, and stubbornly that, so the change in occupancy was unmissable.

The occasion was Daughters of the Vote, a biennial event organized by Equal Voice that brings together young women from each riding in Canada to attend leadership events in Ottawa and then take over their MP’s seat in the House. A place normally well-stocked with grey hair, aggressively sensible suits and trained-seal applause was suddenly animated by stiletto heels, blazers perhaps getting their first outing, hijabs, nose rings, Indigenous regalia and, eventually, steely gestures of protest.

Kim Campbell, Canada’s first and so far only woman prime minister, had just been introduced by speaker Geoff Regan at the beginning of the morning when, in the din of the rapturous ovation Campbell received, three more women slid quietly into the front row of the public gallery above the government side of the House. They beamed and waved exuberantly at the delegates below, who returned the favour. The dynamic between the two groups looked as warm and ecstatic as parents spotting a familiar face on stage in the school play; one delegate, Riley Yesno representing University-Rosedale, blew a kiss to one of the women.

Once the trio sat down, they whipped out their smart phones and began snapping photos of the array of young leaders before them.

It’s unlikely that a single person on the floor of the House of Commons was oblivious to the presence and meaning of the presence of these three in the public gallery, who were Celina Caesar-Chavannes, Jody Wilson-Raybould and Jane Philpott, all very fresh ex-Liberals. The forcible ouster of the latter two from the government benches was at this point a fact barely 16 hours old, and it would become manifestly clear that many of the young women occupying Parliament that morning saw the two former cabinet ministers as enormously impressive role models who had been kneecapped for the sake of craven politics.

Later on, Philpott would say she was “deeply moved” by the passion, enthusiasm and wisdom on display when the delegates rose in the House to address issues of profound importance to themselves and their communities. Wilson-Raybould, for her part, would describe a feeling of gazing at Canada’s future. “I envision one day where we speak about these really important issues—speak truth about these really important issues—and have 338 members of Parliament working together to tackle them,” she said.

READ MORE: Why did Jody Wilson-Raybould have to go? Because: white nationalists.

But if the former cabinet ministers felt like they were looking at the future on the floor of the House of Commons, some of the women occupying those seats were looking right back up at them and seeing the future, too—their own, or a grim version of how it could turn out.

“They’re both so unbelievably qualified and hardworking, they’re exemplary of what I would want to be as a woman in politics one day, and it’s disheartening,” says Deanna Allain, the delegate representing the riding of Hamilton Mountain. “But their integrity, the way that they’ve upheld their courage and their honesty and the work that they continue to do, and our actions today as a coalition of young women in the House of Commons, I think that really speaks to the fact that it’s far from over.”

The day before the parliamentary take-over, Allain composed a tweet that went viral: “Dear @JustinTrudeau, We are here in Ottawa as young women participating in a conference and we wholeheartedly condemn you ejecting Jody Wilson-Raybould & Jane Philpott from caucus. Respect the integrity of women & indigenous leaders in politics. Do better.”

It is almost impossible to imagine a more freighted, unflattering and brand-cannibalizing scenario for the Prime Minister than attending Daughters of the Vote the day after he bounced from caucus the two women at the centre—and for some, the defiant heroes—of the SNC-Lavalin affair. It’s as though somewhere in a distant, haunted wood, a twisted crone with a poison apple and unbelievably sharp political instincts cursed Trudeau with this long-planned, otherwise warmly uplifting event and its accidentally devastating timing.

The day seemed to embody, all at once, what the Trudeau brand and promise was, not so long ago, along with the anger and disillusionment that has greeted its crash back to earth.

Yesno, 19, says that when she joined the Prime Minister’s youth council in 2015, Trudeau registered like an ideological celebrity. “We just really revered him, and it was post-election time and he promised all these really amazing things,” she says. “And then [we] realized that, wow, at a surface level, he claims and says that he represents all of these things, [but] it is not meaningful. It is shallow and it’s hollow.”

The first delegate to speak on Wednesday was Kailey Arthuson of Churchill—Keewatinook Aski, who passed her 20-month-old daughter, Nipí-Pimatisíwinto, to an Equal Voice staffer, then strode to the podium in front of the Speaker’s chair accompanied by the tinkling of her jingle dress and the wailing of a seriously unimpressed toddler. Arthuson, from the Fisher River Cree Nation, decried the systemic racism embedded in Canada’s colonial institutions and the “genocide inflicted on my people” before concluding, “I stand with the women who are excluded and forcibly removed from colonial spaces.” She looked up over her right shoulder and, with a tight-lipped grin, raised a fist in salute to the ousted Liberal women.

READ MORE: Not all political fights are power grabs

Yesno, when it was her turn, cited one number again and again: 1,181, the best estimate of how many Indigenous women and girls are missing or murdered. Remember that number, she implored, and remember it is not a number at all, but people who were loved. “Remember that the kin of the victims called the inquiry into the disappearances and deaths of their loved ones inaccessible, re-traumatizing and a waste,” she said, before sitting down, overcome by emotion in the thunderous standing ovation that followed.

The delegates possessed that particular combination of bright-eyed energy, preternatural poise and righteous fury that belongs to a certain type of impressive young person that you would have to be an idiot to patronize.

As they rose again and again to address what they saw as the most pressing and neglected issues in their country, it was difficult not to hear it as a list of indictments against a beleaguered government and Prime Minister. Indigenous reconciliation, nation-to-nation relations, resource extraction, gender equality, electoral reform: not enough, not fast enough, not for real, they said. It was the greatest hits parade from the Trudeau government’s darkest timeline.

After Wilson-Raybould, Philpott and Caesar-Chavannes had observed about an hour of the event, they left their seats above their former digs on the government benches and quietly slipped out of the chamber where they will now reside in Independent Alley.

Later, when it was Trudeau’s turn to address the delegates, last among the federal party leaders, he was brief and emphasized two themes: listening to different voices while knowing there will never be just one answer to a problem, and the importance of trust. He was not coy about the meaning of either of those themes on this particular day.

Shortly after he began speaking, delegates rose in their seats—nearly 50 in all, at the peak of it—and turned their backs to him. Earlier, about the same number got up and walked out of the chamber during Andrew Scheer’s address, in a semi-organic protest against what they saw as the Conservative leader’s complacency about a broad array of intolerances festering in his party.

The Scheer walk-out was dramatic, but on this day, in this context, it was the spectre of Canada’s famously feminist Prime Minister marshalling a rictus grin and addressing a room full of utterly fierce young women—several dozen of them literally turning on him—that was the image that stuck.

Trudeau did not react to the gesture of protest, which delegates said had been loosely discussed in advance but mostly just happened in the moment, both to show solidarity with Wilson-Raybould and Philpott and to express anger over the government’s shortcomings on Indigenous issues. When Trudeau first mentioned the word reconciliation, a delegate in a beaded suede vest who had not risen with the first crop of protesters stood, turned her back to him and shook her head in disgust.

“I know nobody in here wants to have to pick who to believe between Jody Wilson-Raybould and Chrystia Freeland,” Trudeau said. “Nobody wants to know that one person has to be right and another person has to be wrong between…Jane Philpott or Maryam Monsef.” He grasped repeatedly for Philpott’s name as he spoke, uncharacteristically jittery and inarticulate.

“There are always going to be a range of perspectives that we need to listen to,” Trudeau continued. “But ultimately, diversity—as we see right here in this room—diversity only works if there is trust, and within a team, when that trust gets broken, we have to figure out a way to move forward. So I appreciate the patience everyone has had while we’re working through this internally, but I also know there’s a lot of really big things we need to continue to work on, and we will.”

Allain, from Hamilton-Mountain, is 18, so she’ll vote in her first federal election this fall. When she rose with the others to turn her back on Trudeau, she could feel her heart pumping, because he is after all the Prime Minister, and that office means something to her.

She thought Trudeau’s emphasis on trust was appropriate, but misplaced.

“If this is how a caucus, a government, a political leader, chooses to address and treat women and Indigenous people in politics, I would call [into] … question my trust in their practices and my trust in their governance,” she said. “I think it absolutely is about trust, but I think they’re talking about the wrong people.”

An earlier version of this story stated that Daughters of the Vote happened on Tuesday and that Members of Parliament are not permitted to take photos in the House of Commons. It has been corrected.